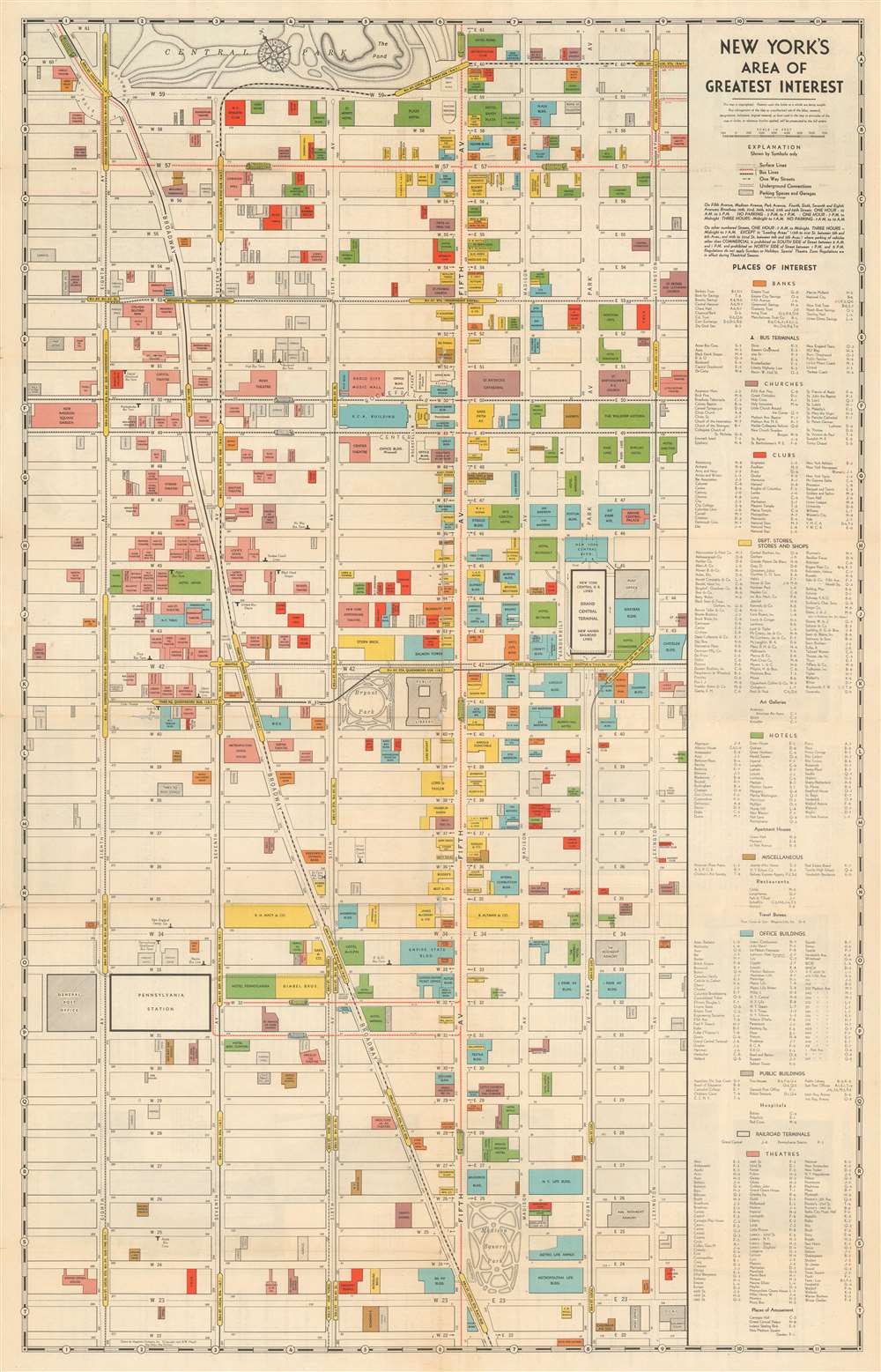 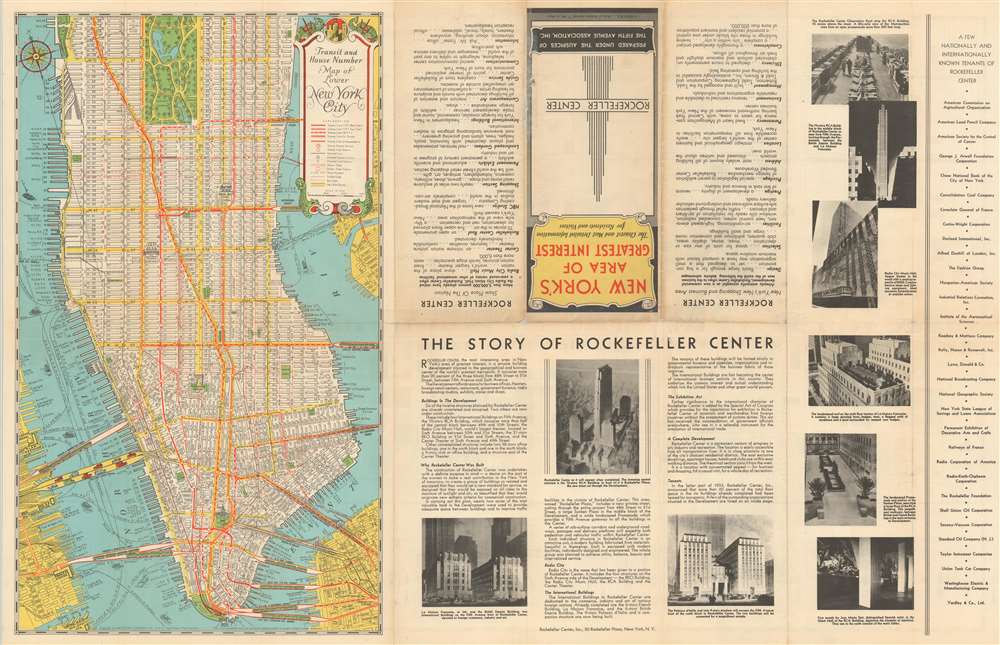 Celebrates the 1933 opening of Rockefeller Center.

This is a scarce 1933 first edition Robert Wentworth Floyd map of midtown Manhattan compiled for the Fifth Avenue Association and Rockefeller Center. Centered on Bryant Park, the map covers from 61st Street to 22nd Street and from 8th Avenue to Lexington Ave. Locations of note are color coded according to their function, with banks, churches, clubs, stores, hotels, office buildings, public buildings, railway terminals, and theaters differentiated. The verso contains text content promoting Rockefeller Center - which opened in the same year this map was published and most certainly contributed to its compilation. Also on the verso, there is a smaller map of New York City by Hagstrom illustrating transit routes.

Rockefeller Center is a business and retail complex consisting of 19 commercial buildings covering 22 acres between 48th Street and 51st Street in Midtown Manhattan. The 14 original Art Deco buildings, commissioned by the Rockefeller family, span the area between Fifth Avenue and Sixth Avenue, split by a large sunken square and a private street called Rockefeller Plaza. The site was originally owned by Columbia University, which leased it to John D. Rockefeller Jr., whose vision motivated the project. Construction began in 1931, and the first buildings opened in 1933. The core of the complex was not fully completed until 1939. It is considered one of the greatest construction achievements of the Depression Era.

This map, printed in 1933, is the earliest edition of which we are aware and the only example that bears Robert Wentworth Floyd's imprint, noted simply as 'R.W.F'. We are aware of variants from 1933 issued for other entities, including one for the Vanderbilt Hotel. The smaller map of New York City on the verso is attributed to Hagstrom - suggesting an early partnership. This, along with Floyd's other work, was acquired by Andrew Gunnar Hagstrom (1890 - 1977) in 1939. It is unclear if Floyd died, simply sold his rights to the maps, or went to work for Hagstrom, but after 1940, his name no longer appears on any Hagstrom maps. Hagstrom did continue to issue this map in many subsequent editions, with numerous updates and revisions. We have seen no other examples of this edition.

Robert Wentworth Floyd (August 12, 1879 - 19??) was a New York mapmaker of Quaker descent active in the middle part of the 20th century. Floyd was born in Boston, the son of Colonel Robert Mitchell Floyd (18?? - 1912). In 1898, he traveled to Nicaragua with a plan to become a coffee grower, but this apparently did not pan out, as he was in New York from about 1901. Maps of New York City, mostly intended for tourists, begin appearing under his name in copyright entries as early as 1933 and as late as 1940. Around 1939, his work was acquired by Andrew Gunnar Hagstrom, who began publishing under his own imprint, by 1940, Floyd had disappeared entirely. Learn More...


Andrew Gunnar Hagstrom (1890 - September 24, 1977) was a map publisher based in Maspeth, Queens. Hagstrom was a Swedish immigrant who came to new York in 1909 where took work milking cows at a farm near Coney Island, Brooklyn. He then worked in the meat packing industry while taking a degree in commercial art at the New York Mechanics Institute. Afterwords he founded a drafting business in Manhattan, creating a map to illustrate his drafting skill help customers locate his shop. His map proved popular and he expanded operations, founding the Hagstrom Map Company (1916 - 1968) and issuing additional maps of various parts of New York City and the surrounding regions. By 1949, Hagstrom had issued more than 150 maps, guides, and atlases, most of which focused on New York. Hagstrom pioneered a cartographic style that exaggerated street size to increase clarity and create additional room for large print readable labeling. Even the New York Subway system hired Hagstrom to produce its map, which was in use from the 1940s to 1958. Hagstrom died in 1977, at the age of 81. Hagstrom was knighted by the King of Sweden. His company flourished until 1968 when it was acquired by Macmillan. The brand has since passed through multiple corporate portfolios and is currently the property by Kappa Publishing Group. Learn More...

Very good. Minor wear on original fold lines with slight loss and verso reinforcement at a few fold intersections.
Looking for a high-resolution scan of this?