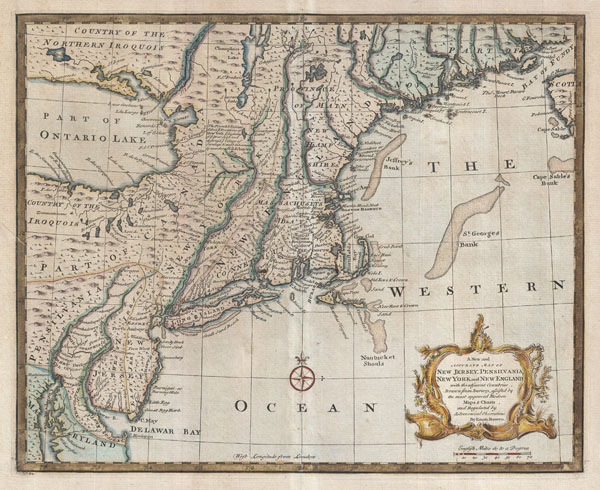 Important early map of the New England Colonies illustrating both the successes and failures of 18th century European mapping in the Americas.

A scarce and remarkable 1749 map of the New Jersey, New York, Pennsylvania, Maine, New Hampshire and Connecticut by Emmanuel Bowen. Covering from the Chesapeake Bay to Lake Champlain and from Lake Ontario to Nova Scotia, this remarkable map is an excellent example of both the success and failures of 18th century English mapping in the American colonies. It also makes evident the challenges of the European map publisher in piecing together numerous disparate reports and mappings into a single cohesive cartographic entity.

In this example, the contrast is most strikingly elucidated in Bowen's relatively accurate mapping of the coast lines in contrast to the extraordinary vagueness of the interior. A simple overlay with a modern map reveals that while Bowen's longitudinal cartography along the coastline is slightly off from Cape Cod westward, his latitudinal reference points are dead on. Heading inland from the Atlantic, this precision quickly evaporates. Lake Ontario is proportionally massive and situated several hundred miles too far east. Despite Bowen's considerable errors in proportion and positioning , the Lake Ontario shoreline is surprisingly accurate in form and detailed down to the Finger Lakes extending south from the main body.

Politically, Bowen offers some interesting detail regarding the early boundary lines of the colonies. New Jersey in divided into the provinces of East and West Jersey. The Pennsylvania is defined as the undeveloped lands to the west of the Susquehanna River. The lands to the East of the Susquehanna River as far as the Delaware River are assigned to the Philadelphia Company. The inland borders between the Massachusetts Bay Colony, Connecticut, and New York are indistinct. Canada extends south to the Pennsylvania border. Bowen, identifies the important Cod fishing Shoals off New Hampshire, Cape Cod, and Nantucket. He also adds number of notations regarding the events that occurred near around 1746 Albany, New York, during King Georges War, third of the four French and Indian Wars. Published for inclusion as plate no. 62 in Bowen's 1747 edition of A Complete System of Geography.