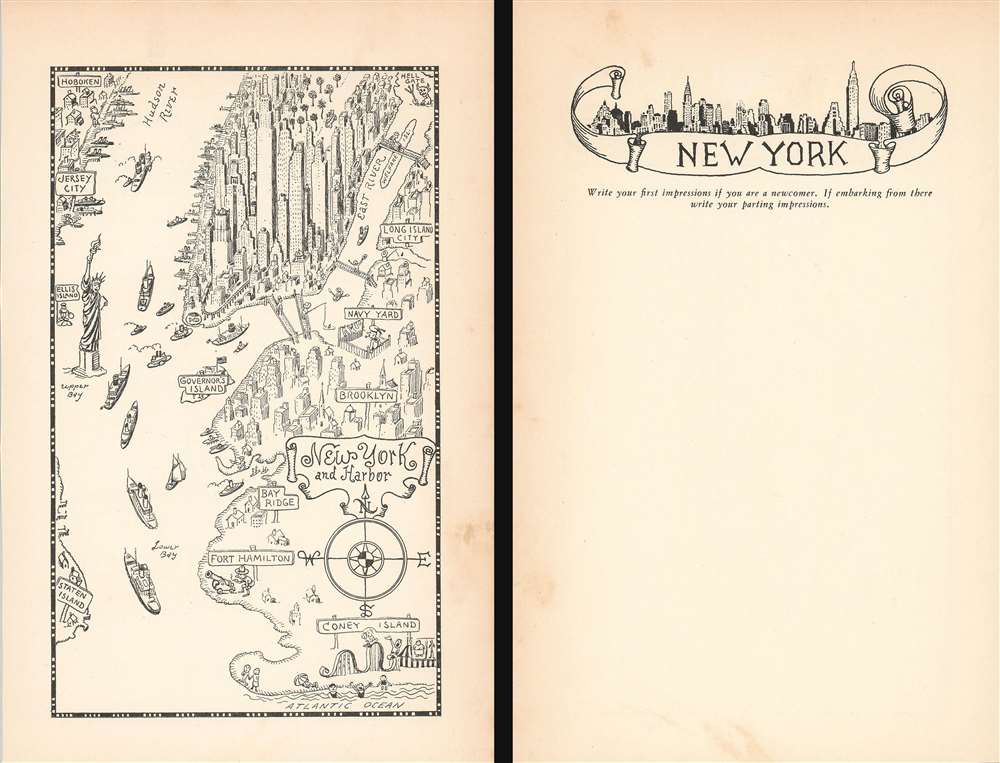 A wonderfully charming pictorial map of New York City featuring a devil at Hell Gate and a fishbowl for the New York Aquarium.
$150.00

This is a delightful 1933 Jo Mora pictorial map of New York City. The map depicts the region from Jersey City to Long Island City and from Central Park to Coney Island and the Atlantic Ocean. True to the aesthetic he cultivated over the course of his career, Mora employs numerous comic vignettes to illustrate this work. The New York Aquarium, then located in Battery Park, is marked simply by a goldfish in a fishbowl. Manhattan's elevated railway, now a thing of the past, curves around Lower Manhattan near Battery Park as well, evoking a note of nostalgia in the modern viewer. Hell Gate, though labeled, is marked by the devil brandishing a pitchfork. All four East River bridges are not illustrated as the wonders of modern engineering that they are, rather as four very simple foot bridges, complete with steps on either end. A man is illustrated fishing off of the Manhattan Bridge, while another figure pushes a wheelbarrow across the Queensboro Bridge.

Mora highlights the Brooklyn Navy Yard, labeled here as simply 'Navy Yard', but doesn't choose to Forth Hamilton in southern Brooklyn is marked by a doughboy (identifiable by his hat) is preparing to fire a cannon into The Narrows, and Coney Island is marked by a carnival barker and a rollercoaster. A very cheerful Statue of Liberty is illustrated greeting the ships entering and exiting the harbor, with an immigrant standing behind her on Ellis Island, then the nation's busiest immigration station.

On a more serious note, Manhattan's iconic, and ever-changing, skyline is highlighted, with the. Empire State Building in the center. Central Park, near the top border, is filled with trees and has a vehicle of some kind illustrated driving through it. Manhattan's many piers along the Hudson River are full, highlighting New York's economic importance and its stature as the largest city in the world. Jersey City and Hoboken are labeled in New Jersey, while the boroughs of Staten Island and Brooklyn are identified in New York.

The verso is mostly blank, but features a wonderful illustration of the New York skyline and a prompt to use the space as a diary entry, 'Write your first impressions if you are a newcomer. If embarking from there write your parting impressions.'

This map was created and published by Jo Mora in 1933. A similar edition was published in a volume by Mora, but this example was almost certainly a separate issue due to the verso content.