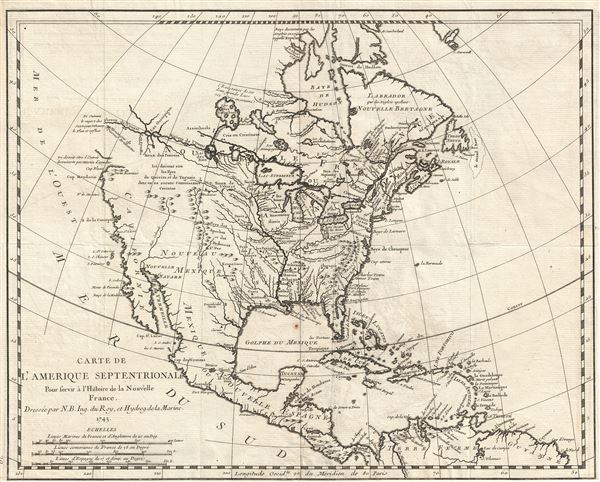 Important early map illustrating the explorations of La Verendrye and the River of the West.

An important and influential first edition first state 1743 map of the North America by the French cartographer Jacques-Nicholas Bellin. Bellin's map covers all of North America from the Arctic to the Spanish Main, including modern day Canada, the United States, Mexico, Central America, and the West Indies. The map features several interesting annotations throughout. These include, among other interesting notes, a comment pointing out the dubious existence of Quiviara and Teguaio, mythical undiscovered cities of gold sought since the days of the Conquistadores.

By far this map's most striking feature is the broad open water route extending westward from Lake Superior, through the Lake of the Woods (Lac des Bois), and continuing via the River of the West (Fleuve de L'Ouest) through Lake Winnipeg (Ouinipigon) to the mysterious Mountain of Radiant Stones (Montagne de Pierres Brillantes). This unusual presentation of the American west is based upon Bellin's extrapolations from the explorations of French Canadian fur trader and explorer Pierre Gaultier de Varennes, Le Sieur de La Verendrye. This river system is based heavily upon a canoe map drawn for La Verendrye in 1728 by the American Indian Cree guide Auchagah. The ultimate westernmost point on this map, near the Mountain of Radiant Stones, is in fact still several thousand miles from the Pacific. Bellin's error here comes from his attempts to extrapolate from the distances, direction, and portages illustrated on Auchagah's map compounded by a lack of surveyed points west of the Lake of the Woods. The result is a double mapping of Lake Winnipeg and a vast overestimation of the distance represented. The 'Montagne de Pierres Brillantes' are an early American Indian descriptive term for the Rocky Mountains, a near impenetrable barrier located about 1200 miles further east than Bellin's map suggests.

Though not textually identified, Bellin's four spurious Islands in Lake Superior are represented. Most believe that the earliest representation of these islands occurred in Bellin's 1744 specific map of the Great Lakes. This map, though present in the same publication, actually predates the 1744 map in its construction by one year. It was Charlevoix who invented the four spurious islands in Lake Superior, known as Philippeaux, Pontchartrain, Maurepas, and St. Anne. The islands were intended to honor Charlevoix' s personal patron, the Count of Maurepas, Jean-Frederic Phelypeaux. The largest of the three islands, Philippeaux, is named directly after the count. The second largest island, Pontchartrain, refers to Phelypeaux's family estate. The third island, which may in fact be a mismapping of the factual State Islands, is named after the count's seat, Maurepas. The fourth and smallest of the islands, St. Anne, references the count's patron saint. Charlevoix described the islands as being rich in minerals leading numerous explorers to search for them in vain. Bellin dutifully introduced the four islands to his map, offered here, and such was his influence that they were subsequently copied by most subsequent cartographers, including John Mitchell in his seminal 1755 wall map of North America. The highly regarded Mitchell map was used in negotiating the 1783 Treaty of Paris that formally concluded the American Revolutionary War. Therein, the apocryphal Philippeaux was assigned as a marker for the new United States - British America border thus setting the stage, as one might image, for later political strife

Bellin's map is a profoundly French production indicative of both the sophistication of 18th century French cartography and influence of French political ideologies on mapmaking. The map centers on the Mississippi with French territory extending from the Appellation Mountains to the Rio del Nord (Rio Grande), including all of Texas and parts of modern day New Mexico - claims associated with La Salle's explorations and colonization of the Gulf Coast in 1685 (these claims, incidentally, led to 19th century U.S. Claims on Texas associated with the Louisiana's Purchase). Detailed identification of numerous American Indian nations and settlements throughout the territory, mostly along known river courses, further illustrate France's paternal and comparatively peaceable approach to New World Indian relations, commerce, and colonization. The contrast is partially noteworthy with regard to the English territories to the East of the Appellation Mountains, and the Spanish Nouveau Mexique where few American Indian settlements are noted. Just 11 years after Bellin drew this map these and other tensions would eventually devolve into the 1754-1763 French and Indian War.