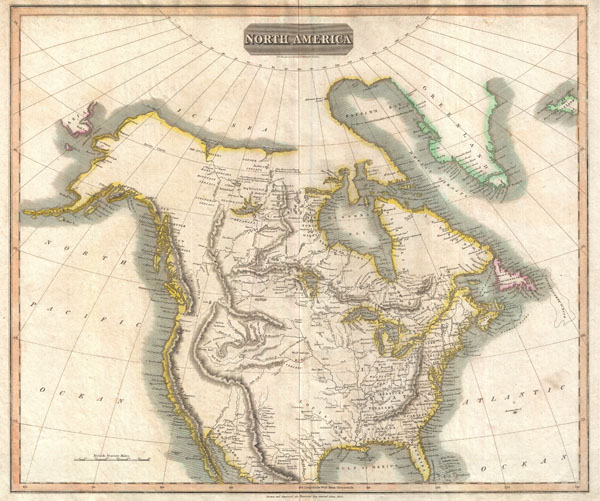 An essential map for any Transmississippi collection.

This beautiful map is John Thomson's important 1814 interpretation of North America. This map covers from the Arctic Sea south to the southern tip of Florida and the northern parts of Mexico. Cartographically Thomson draws heavily from the explorations of Samuel Herne, Alexander MacKenzie, Lewis and Clark, David Thomson, and others. This map naturally offers impressive detail both with regard to those better known parts of the United States located east of the Mississippi as well as in the British controlled provinces north of the Missouri River. The Great Lakes as well as many of the lakes and riverways to the west of the Hudson Bay are also exceptionally well mapped giving evidence to the work of French and British explorers seeking a river passage to the Pacific as well as to the exploratory efforts of the Northwest Company and the Hudson Bay Company, most notably Herne and Mackenzie treks to the Arctic. The Transmississippi is, by contrast, only sparsely mapped in accordance with the 1811 cartographic speculations of Alexander von Humboldt, especially his remarkable treatment of the Rocky Mountains, compounded by relatively limited information drawn from the just published journals of the Lewis and Clark Expedition. Curiously neither Great Salt Lake nor Utah Lake are anywhere in evidence despite being mapped in some of Thomson's other maps of the region, such as his Spanish North America plate. Another curiosity is the interesting path commencing at the confluence of the Oisconsin and Mississippi Rivers and running east nearly to the Missouri - its source and purpose are a mystery In a clear case of carto-advocacy Thomson has attached the name New Albion to the entire western coast from Vancouver Island to the Gulf of California, thereby asserting a British claim to the region dating to Drake's 16th century circumnavigation of the world. Dated: 'Drawn and Engraved for Thomsons New General Atlas 1814.' This is the first edition of Thomson's map from the 1814 edition of the Atlas. Subsequent editions were published in 1817 and 1826. This map is an essential addition to any serious Transmississippi collection