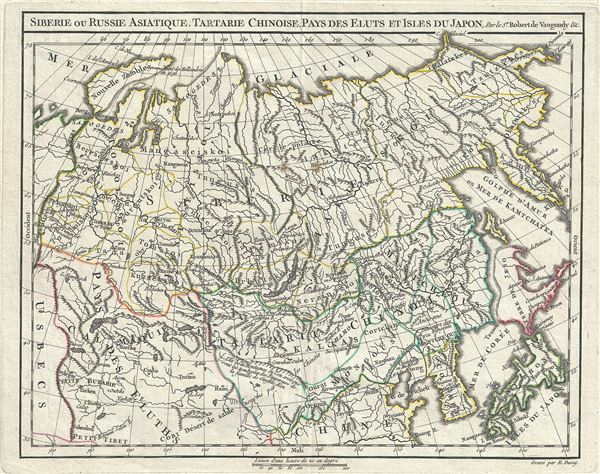 This is a rare and attractive 1778 map of Northern Asia, comprising Asian Russia, Siberia, Chinese Tartary, Korea, and Japan by Robert de Vaugondy. It covers the vast expanse of northern Asia from Novaya Zembla eastward as far as the Kamchatka Peninsula. This map is most interesting in its rendering of the largely unexplored extreme northeast of Asia. Knowledge of this area was, at the time, speculative at best. A mishappen and large Hokkaido (Terre de Jeso) is mapped only speculatively with its western borders unknown. Shows Sakhalin Island in an embryonic state. The Great Wall of China is marked.

The map centers on the vast stretch of land known for most of the 18th century as Tartary. This area was once part of the vast Mongol Empire consolidated under Genghis Khan around 1206 AD. Although the empire of the Great Khan had long since disintegrated into constituent states by the time this map was made, this little known and largely inaccessible region held a special fascination for western Europeans who were reared on legends of the dreaded Mongols or Tartars and their leader, the terrifying Scourge of God. Consequently, much of the geography of Central Asia represented here references these early conquests. Genghis Khan's largely abandoned capital at Karacum is noted. To the south of Karakum, Vaugondy notes a range of mountains with a notes that roughly translates to 'Ula Gola Mountains or one believes are the tombs of the emperors of the Family of Genghis Khan.'

This map was engraved by E. Dussy and published by Jean Fortin in 1778.

Pedley, Mary Sponberg Belle et Utile: The Work of the Robert de Vaugondy Family of Mapmakers, 403, state 2.
Looking for a high-resolution scan of this?