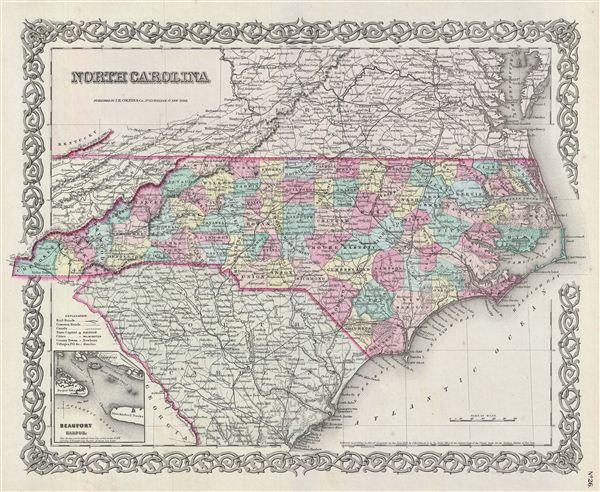 An excellent 1855 first edition example of Colton's map of North Carolina. Like most of Colton's state maps, this map was derived from an earlier wall map of North America produced by Colton and D. Griffing Johnson. The map covers the entire state as well as adjacent parts of South Carolina and Virginia. An inset map in the lower left quadrant details Beaufort Harbor. Names Cape Fear, Cape Lookout, and Cape Hatteras as well as the Blue Ridge and Great Smokey Mountains.

This map was issued at the height of the American westward expansion. Six years before this map was drawn the California gold discovery of 1849 enticed thousands to embark upon the rigorous transcontinental emigration. Meanwhile, with the rise in territorial population to the west of the Mississippi, the eastern states were becoming increasingly divided over the issues of slavery and state vs. federal sovereignty. Within five years these disputes would lead to the American Civil War. North Carolina, a Confederate state, was hit particularly hard by the war and witnessed numerous bloody battles.

This map also identifies various forts, rivers, mountain passes, fords, and an assortment of additional topographical details. Map is hand colored in pink, green, yellow and blue pastels to define state and territorial boundaries. Surrounded by Colton's typical spiral motif border. This is one of the few mid-19th century atlas maps to depict North Carolina independently. It is more commonly mapped in conjunction with South Carolina. Dated and copyrighted to J. H. Colton, 1855. Published from Colton's 172 William Street Office in New York City. Issued as page no. 26 in volume 1 of Colton's 1856 Atlas of the World.