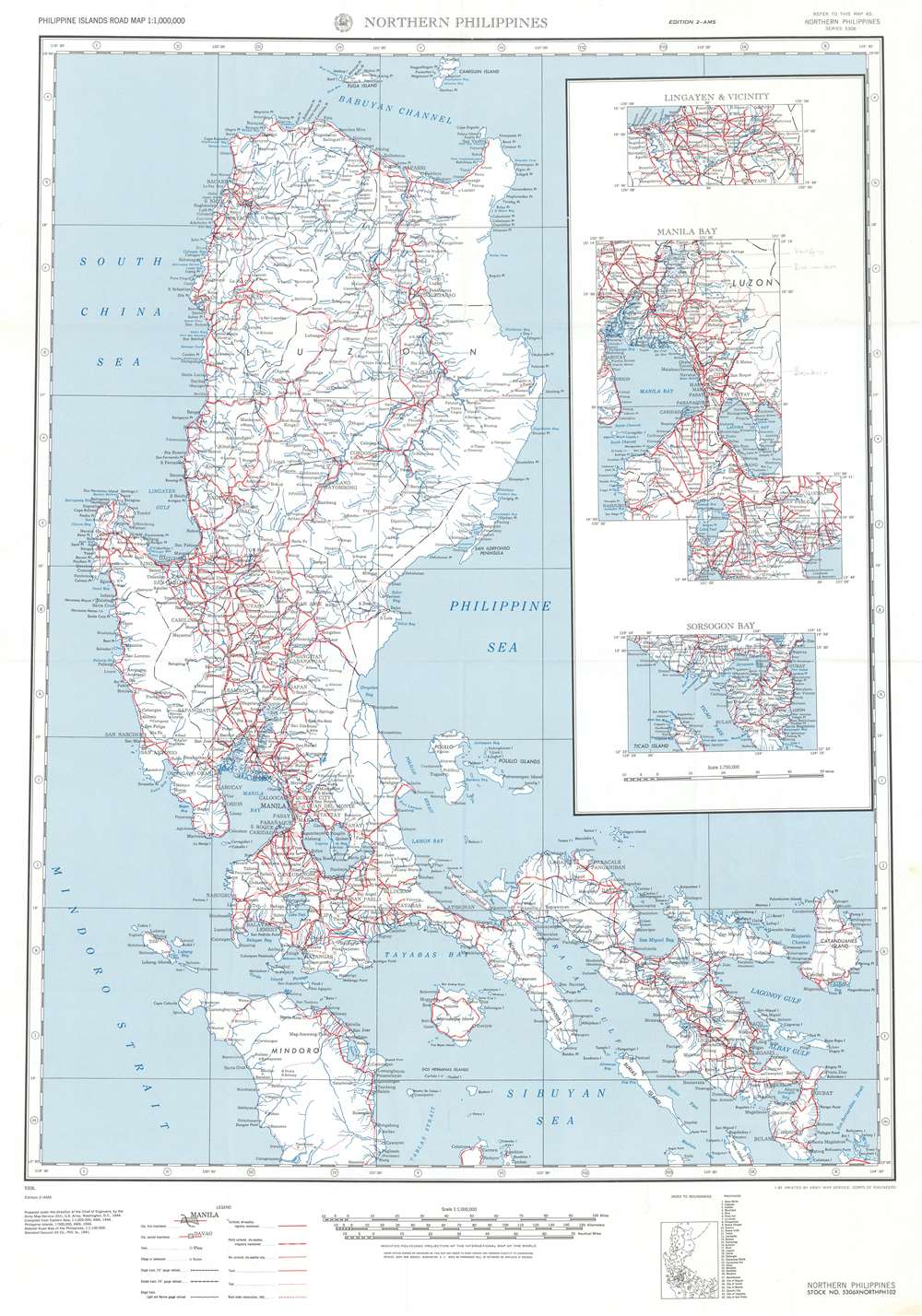 A detailed road map of Luzon created the year before Allied forces began retaking the island from the Japanese.
$300.00

This is a 1944 Army Map Service road map of northern Luzon in the Philippines. The map depicts the region from the South China Sea and the Mindoro Strait to Cataduanes Island and from Fuga Island and Camiguin Island to Mindoro and the Sibuyan Sea. Roads throughout the region are highlighted in red and are not limited to Luzon alone. Roads of varying grades are also differentiated, with thick red lines denoting 'surfaced, all-weather, regularly maintained' roads, while 'partly surfaced, dry-weather' roads are marked by solid and white dashed lines. Not surfaced roads are illustrated by two thin parallel red lines, while a thin solid red lines mark tracks. Trails are noted by thin dashed lines.

Cities and towns throughout the region are labeled, including Manila, Pasay, and Lingayen. Bays, gulfs, points, and peninsulas all along the coast are identified as well, as are the myriad small islands surrounding Luzon. Three insets situated along the right border highlight Lingayen and the immediate vicinity, Manila Bay, and Sorsogon Bay. A small index map situated below the bottom border illustrates and identifies all thirty-three provinces depicted here.

This map was created by the Army Map Service of the U.S. Army in 1944.

The Army Map Service (AMS) (1941 - 1968) was the military cartographic agency of the U.S. Department of Defense and part of the U.S. Army Corps of Engineers. The AMS compiled, published, and distributed military topographical maps and other related materials for use by the U.S. Armed Forces. They also prepared maps for space exploration, intelligence reports, and the establishment of world geodetic control networks. Formed during World War II, by the end of the war the Army Map Service had prepared 40,000 maps. 3,000 different maps were created for the Normandy invasion alone. The AMS was instrumental in the Korean War and the Vietnam War, and during all three of these conflicts distributed tens of millions of maps to U.S. servicemen. On September 1, 1968, the AMS was resdesignated the U.S. Army Topographic Command, and continued under this name as an independent organization until January 1, 1972 when it was merged with the new Defense Mapping Agency and renamed the DMA Topographic Center. The Defense Mapping Agency was added to the National Imagery and Mapping Agency on October 1, 1996, which was redesigned the National Geospatial-Intelligence Agency in 2003.