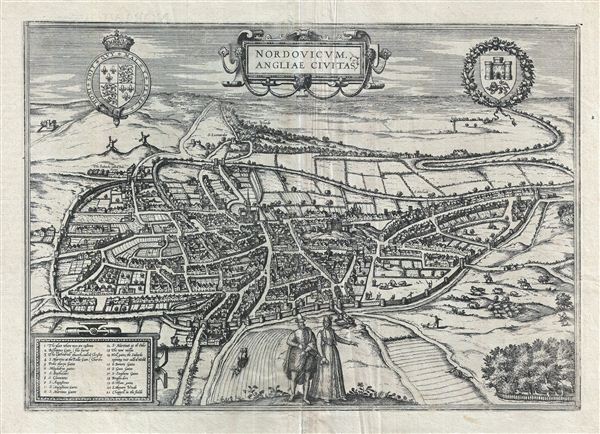 A beautiful example of Braun and Hogenberg's 1581 view of Norwich, england. The view is based on William Cuningham's plan of 1558 and presented the city in an oblique view as seen from the northwest. Situated on the Wensum River, the city is shown with its medieval walls and the Normal Cathedral of the Holy and undivided Trinity at the center. To the right of the cathedral, on a grassy hill, is the city's castle. A key in the lower left quadrant identifies some 21 additional sites throughout. At the base of the map are two citizens of the city dressed in the regional traditional costume. The armorial crests of the city and the queen appear in the upper right and left quadrants, respectively. The baroque title cartouche appears at top, center. Braun's commentary on the city follows:

Norwich, in Latin Nordovicum or, as others like, Norvicus, is a densely populated city in england. It is roughly the shape of a taught bow: it lies on a hill, which is however not very steep, and reaches out far and wide in all directions. According to common legend two townsmen encircled the city with ring walls in the year 1374. The townsmen of Norwich are subject to the same jurisprudence, the same ceremonies and provisions in the city regiment as currently the townspeople of London.

This view was published in Braun and Hogenberg's seminal work Civites Orbis Terrarus.

Good. Some creasing along original centerfold. A couple of minor wormholes to margins. Verso repair along original fold lines larges limited to lower margin. Latin text on verso.
Looking for a high-resolution scan of this?