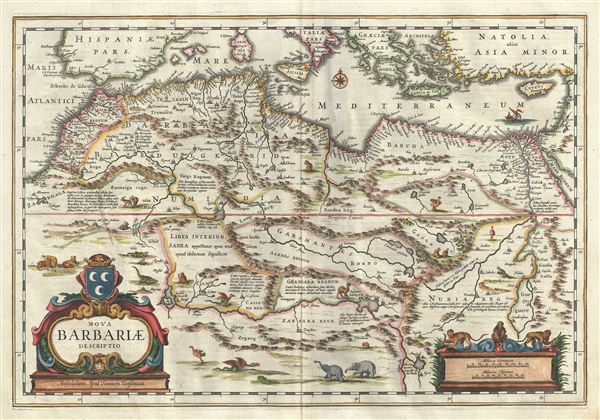 This is a fascinating example of Johannes Bleau's decorative c.1640 map of the Maghreb or Barbary Coast of northern Africa. It covers from the Morocco to the Nile Delta. The region consists of the modern day nations of Tunisia, Libya, Algeria, Egypt and Morocco. The map offers excellent detail throughout showing mountains, rivers, national boundaries, cities, regions, and tribes.

As Bonne was preparing this map, the Barbary Coast was a hotbed of piracy - much like the Somali coast today. The Barbary Pirates would attack trading ships passing through the narrow Gibraltar straits and western Mediterranean. Ships would be destroyed or appropriated, cargo sized, and the crews and passengers enslaved. By the early 19th century, piracy in this region would become so intense that the United States would launch its first major naval offensive against Tripoli. The resultant 1805 Battle of Derne would later inspire a portion of the lyrics of theÂ Marines' Hymn, 'the shores of Tripoli.'

In addition to Bleau's fascinating depiction of the region, among the most in any mapping of this region during the time, there are also a number of attractive decorative elements. The land is filled with several animals throughout, including elephants, ostriches, antelopes, monkeys, crocodiles, prehistoric fire breathing dragons, etc., while a ship sails in the Mediterranean near Cyprus and the mouth of the River Nile. A decorative baroque title cartouche appears at the lower left quadrant and in the lower right quadrant, another smaller cartouche frames the distance scales, surrounded by three monkeys.