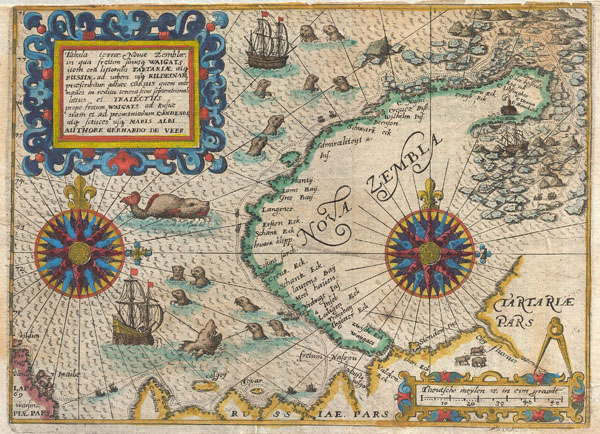 A seminal map in the search for a Northeast Passage to Asia.

A highly important map regarding the early search for a Northeast Passage. This remarkable map was drawn in 1601 by Theodore de Bry to describe the ill fated third voyage of the Dutch explorer William Barentsz in search of the Northeast Passage. The map depicts the Island of Nova Zemba, or Novaya Zemlya, in the Russian Arctic along with two stunning compass roses, numerous rhumb lines, and a multitude of seals and sea monsters. Throughout the 16th and 17th centuries the concept of a Northeast Passage through the Arctic to Asia held the same significance as North America's Northwest Passage. The nations of Northern Europe, particularly Russia and Holland, were eager to find an easy route to Asia via the Arctic in order to access the lucrative trade with China and India. Barentsz's first expedition in 1594, in which he discovered Novaya Zemlya and a number of other Arctic Islands, was widely publicized in Europe and led to the assumption that a Northwest Passage may indeed be feasible. His second voyage, 1595, was considered a truncated failure due to inclement weather and ice packs in the Kara Sea. A year later, his third voyage in 1596 was a utter disaster. Our map details Barentsz's route as he passes north of Finland and thus into the Russian Arctic. His expedition then travels north and northwest along the western shore and ultimately around the northern tip of the archipelago. Here the ice flows coming out of the high Arctic trapped Barentsz 'sexpedition and ultimately forced them ashore. Using the timber from their ship they constructed a small cabin where, subsisting on stores from the ship and the occasional polar bear, they survived the unbelievably harsh winter. By June, the ice still refused to yield up the surviving ship, so the desperate sailors decided to try their luck on two smaller vessels. These, shown at the extreme right of the map, in seven weeks of harrowing sea travel eventually circumnavigated Nova Zembla and were rescued by a Russian merchant vessel near the Kola Peninsula. Barentsz himself perished on this desperate trip scarcely seven days after leaving Nova Zembla. However, some of his companions, on returning Holland, published an account of the voyage for which this map was made. In 1871, the Norwegian seal hunter Elling Carlsen rediscovered Barentsz' cabin on Nova Zembla - perfectly preserved due to the Arctic cold. Today icebreakers filled with tourists stop at the site as they round Nova Zembla. On a darker note, Nova Zembla, or more appropriately in this case Novaya Zemlya, was also the site of Russian nuclear testing during the Cold War. The world's largest above ground nuclear detonation, the 50 megaton Tsar Bomba, exploded here n 1961.

Drawn by Gerhardo de Veer, a survivor of all three of Barentsz's expeditons, and published c. 1601 by Theodore de Bry in the third issue of the first Latin edition of Grands et Petits Voyages.

Gerhardo de Veer (c. 1560 - 1620) was a Dutch sailor who accompanied the Friesian explorer William Barantsz on three ill fated expeditions into the Russian Arctic in search of a Northeast Passage. Unlike Barantsz himself, de Veer survived all three voyages as well as a harrowing winter on the glacier bound northern tip of Nova Zembla. After the death of Barentsz, de Veer and several other sailors made their way south through treacherous ice flows to the relative safety of the Russian port of Kola. It is largely through Gerhardo de Veer's narrative and maps that we know of the tragic events of Barentsz's third voyage. Learn More...