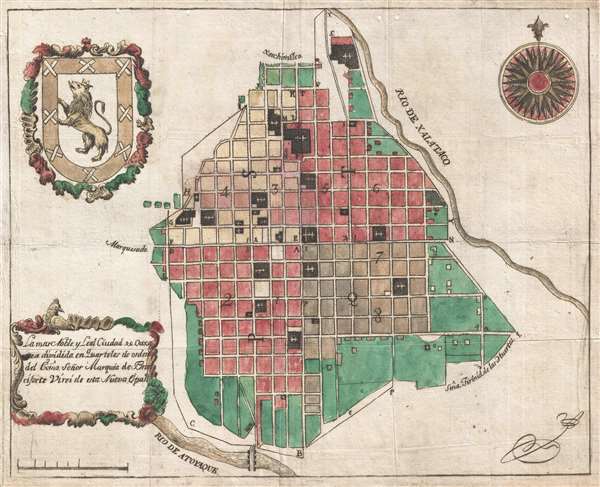 This is the earliest known specific printed city plan of Oaxaca de Juarez, Oaxaca, Mexico. The map was printed in Mexico City by the widow of envraver Manuel Galicia de Villavicencio around 1795 under the auspices of the Don Miguel de la Grúa Talamanca de Carini y Branciforte, then the Viceroy of New Spain. It illustrates the city of Oaxaca on its colonial grid, nestled between the Atoyac River and the Jalatlaco River (now underground). The map is centered on the modern-day Cathedral and the Zocolo. It covers from Margarita Maza de Juarez in the north (with the Iglesia de Guadalupe being the northernmost church), to Calle Vega in the south. And from Galeana in the west, to Leonardo Valle in the east. The area depicted encompasses roughly the modern-day Centro Historico.

This map was made for and dedicated to Don Miguel de la Grúa Talamanca de Carini y Branciforte, then the Viceroy of New Spain. Don Miguel was born in Sicily and joined the Spanish navy in 1755. He married the sister of the then Spanish Prime Minister Manuel de Godoy and quickly rose in rank, being awarded the title of Marqués de Branciforte just prior to being named Viceroy of New Spain on March 26, 1794. While unpopular and corrupt as a Viceroy, he did sponsor several urban development projects throughout Mexico - one of which may have been the raison d'etre for this Oaxaca plan. The partial mileage scale and the blank space in the lower part of the cartouche suggest that this plan was left unfinished.

The art historian Barbara E. Mundy argues that colonial era city plans like this reflect an attempt by officials to dominate urban space and, by extension, society. Maps portray a world more clear cut and orderly than actually existed, presenting a controlled organized alternative reality. This in turn fostered reformist projects and and urban improvements that were constructed throughout New Spain during the eighteenth century. City plans, like his map of Oaxaca, were part of a governmental regime of presumed social, economic, and political sovereignty. There can be little doubt that this bold and clean vision was undermined by the vagaries of the city's day to day operation and may account for the unfinished state of the map.

Early cartographic representations of Mexican cities are rare and most of those that exist were engraved and printed in Europe from manuscripts prepared in Mexico, before being taken to Europe for printing. To be sure, a few maps were printed in Mexico, including a map of Hispaniola issued in 1658 that is today believed to be the first map printed in the New World. Nonetheless, a sophisticated cartographic printing tradition did not develop in Mexico until the late 19th century. Even in 1847, when negotiations related to the Treaty of Guadalupe-Hidalgo brought to a close the Mexican-American War, and radically reshaped the political future of North America, the map used by both sides was printed by John Disturnell in New York. This simply goes to say that Mexican imprint maps, by which is meant maps printed in Mexico, are quite special and exceedingly rare.

Manuel Galicia de Villavicencio (1730 - c. 1788) was a line and map engraver active in Mexico City during the late 18th century (fl. c. 1753 - 1795). Most of what we know of him comes from Inquisition Archives. Villavicencio ran afoul of the Inquisition in 1768 over an engraving of Sant Josaphat that ran contrary to church doctrine. According to Inquisition records, Villavicencio owned an engraving and print shop at Calle de la Polilla, Mexico City, which he operated with his wife, Petra de Monterrey. The shop did a robust business with more than 100 engraving attributed to him. He died around 1788. At this point, according to an advertisement in the Gazeta de México the shop relocated to Calle de la Canoa, 12. Most likely it came under management of his wife, Petra, who presumably learnt engraving from her husband. Villavicencio produced few maps, but his work is distinctive for his idiosyncratic engraving style. Of the three, two were issued posthumously, probably from old plates partially finished. Known maps include a map of Mexico City (December 12, 1782), an unsigned map of Oaxaca City (1795), and an unsigned map of San Luis Potosi (1794). The first map, Mexico City, dedicated to Martín de Mayorga Ferrer, viceroy of New Spain from 1779 to 1783, appears to have been engraved by two separate engravers, operating in a similar style, but with varying degrees of competency - likely Villavicencio shared the work with his wife. The later maps are dedicated to the Miguel de la Grúa Talamanca de Carini and Branciforte, Viceroy of New Spain from 1794 -1798, and were probably engraved by Villavicencio's widow, Petra, as they were issued after his death and exhibit similar but less sophisticated work. All three maps relate to urban redistricting that occurred in Mexican colonial cities in the second half of the 18th century.