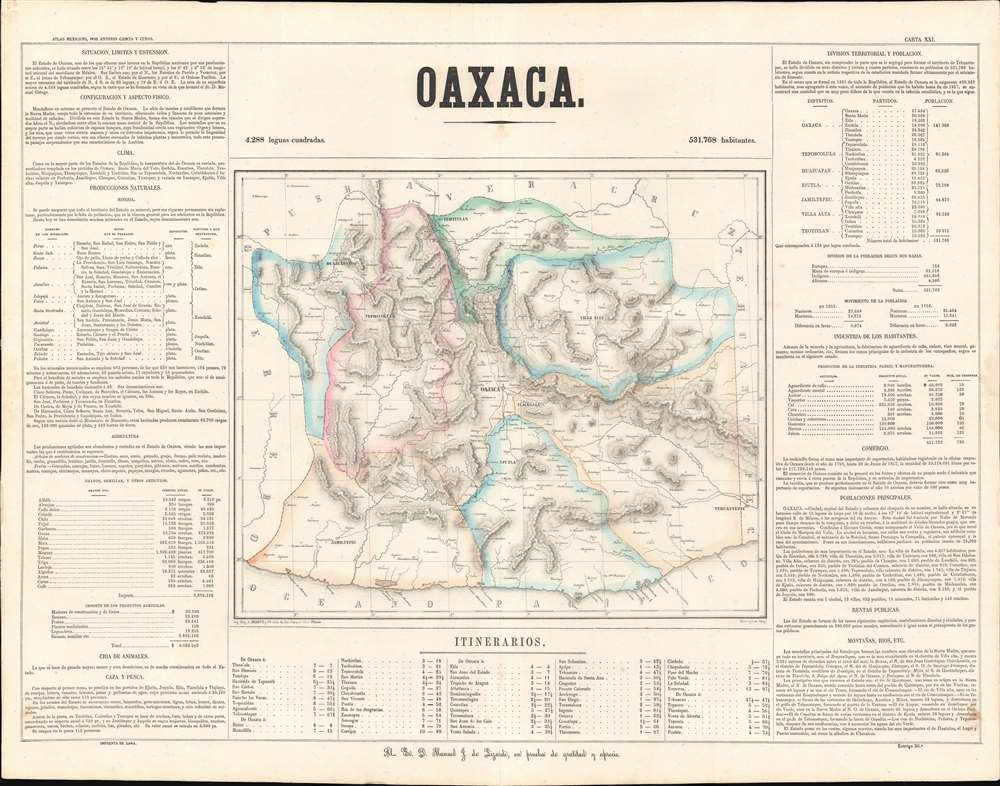 This is a rare 1858 Antonio Garcia y Cubas map of the state of Oaxaca, Mexico. Centered on Oaxaca City (Oajaca), coverages extends from the Guerrero border to Tehuantepec, then in a separate state, and from Veracruz to the Pacific. The map is divided into various subdistricts with considerable efforts to illustrate the region's mountainous interior - a considerable achievement for the time. Even the Pre-Columbian ruins at Mitla are noted. Only major roads are defined, underscoring just how remote and difficult to access many of these villages were - nonetheless most of the locations are noted with considerable accuracy. The map itself is surrounded by statistical tables.

Of great interest to us, this is the only historic map we have seen to make note of Mezcal production in Oaxaca! Today, Oaxaca is well known as the heart of Mexican mezcal production. Mezcal, an agave spirt and precursor to Tequila, was made in Oaxaca and other parts of Mexico for hundreds of years - some claiming it dates to the Pre-Columbian Era. Today, Mezcal has undergone a renaissance. The map notes that in 1857, 2,365 barriles of Aguardiente Mezcal were produced, with a value of some 36,870 Pesos. It moreover notes that 122 people were involved in the Oaxaca mezcal industry. It is interesting to compare this to the rum production in the same year, when 2,040 barriles of Aguardiente de Caña were produced, a value of 40,800 Pesos, but only 19 people were employed. This underscores how then, as today, mezcal production was an artisanal labor-intensive process when compared to the more industrial production techniques associated with other spirits.

This map was prepared and issued by Antonio Garcia y Cubas, the Padrino of Mexican cartography. The map was engraved by J. M. Muñozgúren of Litografía de Iriarte y Compañía in 1858. The surrounding textual content was added by José Mariano Fernandez de Lara's Imprenta de Lara. It was issued as map no. 21 in Garcia y Cubas' Atlas Geográfico, Estadístico e Histórico de la República Mexicana, the first modern atlas of Mexico. The atlas was printed in a small run of just 300, so examples are today quite rare. We note examples in the collections of David Rumsey and at the Mapoteca Manuel Orozco y Berra.

Antonio Garcia y Cubas (July 24, 1832 - February 9, 1912) was a Mexican cartographer, writer, engineer, and geographer active in Mexico City in the second half of the 19th and the early 20th centuries. He is considered Mexico's first great geographer. Garcia y Cubas was born in Mexico City. He was orphaned at birth and was raised by is aunt. When he turned 18, he enrolled in the Dirección General de Industria, a government sponsored technical school. There he studied engineering and geography, which he further pursued at the Colegio de San Gregorio, Colegio de Ingenieros. He graduated with honors in geography and from 1856, became a member of the Sociedad Mexicana de Geografía y Estadística. His geographical work earned him the Order of Guadalupe, a Mexican second empire honorific, directly from the Emperor Maximillian. He published several atlases, including his important Atlas Geográfico, Estadístico e Histórico de la República Mexicana, and multiple decorative chromolithograph Atlas Pintoresco e Históricos covering Mexico, Cuba, Spain, and elsewhere. Today his work is scarce and highly desirable. Learn More...


Hesiquio Iriarte (1824 - August 30, 1903) was a Mexican artist, lithographer, and publisher active in the second half of the 19th century. Iriarte was born in Mexico City, the son of Mariano Iriate and Asuncion Zúñgia. Iriarte began working in the lithographic studios of M. Murgurïa y Cie. in around or slightly before 1847. He founded his own firm, Litografía de Iriarte y Compañía, in 1854. He was a prosperous lithographer with a large corpus. His most famous work, 'El Pulquero' was produced early in his career under Murgurïa. In cartographic circles, he worked extensively with Antonio Garcia y Cubas (1832 - 1912), lithographing maps for the great Atlas Geográfico, Estadístico e Histórico de la República Mexicana. His workshop was at Calle de St. Clara no. 23, Mexico. Learn More...


J. M. Muñozgúren (fl. c 1850 - 1865) was a lithographer and engraver active in Mexico City during the second half of the 19th century. Most of Muñozgúren's work is associated with the lithographic firm of H. Iriarte y Cia. He engraved extensively for the Antonio Garcia y Cubas (1832 - 1912) Atlas Geográfico, Estadístico e Histórico de la República Mexicana. Learn More...


José Mariano Fernandez de Lara (1799 - 1892) was a Mexican publisher and printer active in Mexico City the middle to late 19th century. Fernandez de Lara was born in Mexico to a family of silversmiths. Eschewing the smithing trade, he began his printing business around 1822. At the time, printing in Mexico was undergoing a revolution. Prior to Mexican Independence (1821), printing was tightly controlled by the Spanish Crown, who insisted that only those with a Privilegio Real could operate presses. With newfound freedom of the press, and the need for a strong national identity, as well as the development of economical printing techniques like lithography, lead to an explosion of printing in the early 1820s. In 1821 alone the number of presses in Mexico City jumped from 8 to 15. His earliest work was crude, exhibiting little skill, but a passion for political canvassing for thought-leaders of the day, among them Fernández de Lizardi (1776 - 1827) and Gómez Farías (1781 - 1858). He soon became a master printer, employing the best Mexican engravers and typesetters of the generation. The Lara press prospered until the late 19h century, issuing books, atlases, posters, religious works, and more. Ultimately, the firm's business began to dry up as more advanced printing techniques led to greater competition. The firm closed its doors in 1878 and Lara himself died in 1892. Learn More...

Garcia y Cubas, A., Atlas Geografico, Estadistico e Historico de la Republica Mexicana. (Imprenta de Jose Mariano Fernandez de Lara) 1858.     The Atlas Geográfico, Estadístico e Histórico de la República Mexicana was the first geta atlas of Mexico, produced by a Mexican, and printed in Mexico. The atlas was published in 1858 by Antonio Garcia y Cubas (1832 - 1912), Mexico's first great geographer, when he was just 26. It featured 28 individual maps of Mexican states, two general maps of Mexico, and two plates partially in Nahuatl, the ideographic written language of the Aztecs, illustrating the historic pilgrimage of the Aztec peoples form New Mexico to the Valley of Mexico. At the time, Mexico was still reeling from its losses during the Mexican American War (1846 - 1848), 10 years earlier. Garcia y Cubas' work was thus significant in affirming Mexican national identity. Today, the atlas is rare. According to Sabin in A Dictionary of Books Relating to America: from its Discovery to the Present Time, the print run was limited to just 300. The work was printed in Mexico City by Mexican publishing pioneer José Mariano Fernandez de Lara. Many of the maps were engraved by Litog. De Decaen, H. Iriarte y Ca, and J. M. Muñozgúren.