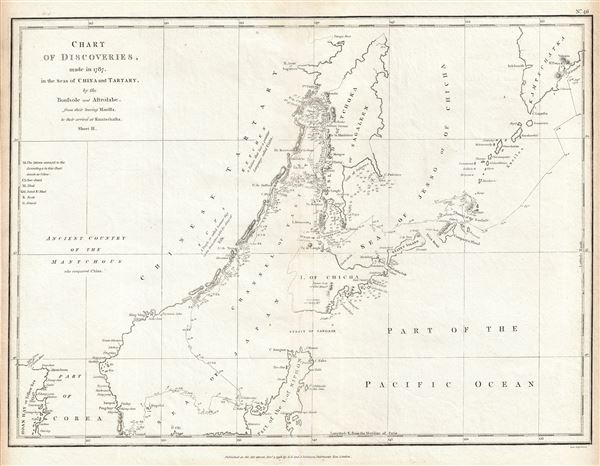 This is a fine example of La Perouse's important 1787 mapping of the Sea of Japan and the Sea of Okhotsk. The map covers the region from the coast of southern Kamchatka south as far as northern Japan and Korea. The eastern coasts of China and Siberia, Sakhalin Island and the Kuril Islands are also covered.

This map is one of the most important early surveys, exhibiting the first accurate mappings of the region by Europeans. The chart tracks La Perouse's course in the ships Boussole and Astrolabe. This particular chart notes the ships progress each day, from its arrival into the Sea of Japan on May 27, 1787, north along the coast of Chinese Tartary or the Sea of Tartary, past Hokkaido, the northernmost island of Japan, along the Kuril Islands, to their arrival in Kamtschatka (Kamchatka) on September 6, 1787.

The strait between the northern part of Hokkaido and the southern part of Sakhalin is identified as the 'Strait of La Perouse,' known today by the same name. The chart includes some interesting notes including ' Yupi A people so called because they dothe themselves with the skins of Fish' and Ketchen a nation that has a peculiar language called Fiatta.' The sea between Japan and Korea, whose name, the 'Sea of Korea,' 'East Sea,' or the 'Sea of Japan,' is here identified in favor of Japan.

The chart notes several place names, especially along the coastlines, notes mountain ranges, islands and other topographical features, with elevation rendered by hachure. This chart is engraved by Neele and issued as plate no. 46 in the first English edition of G. G. and J. Robinson's Charts and Plates to La Perouse's Voyage, published in 1798.