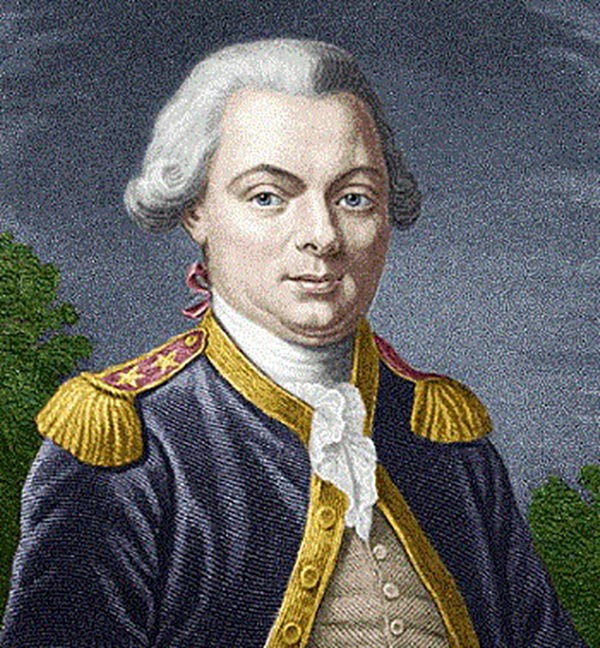 Jean François de Galaup, Comte de La Pérouse (August 23, 1741 - 1788) was a French naval officer, navigator, and explorer active in the later part of the 18th century. Born into a noble family of Albi, France, La Perouse entered the navel college of Brest at just 15. At seventeen La Perouse made his first naval voyage, a supply expedition to the fort of Louisbourg in New France. He later participated in a number of naval battles, mostly against the English, and eventually rose to the rank of Commodore. In 1782 he captured the English forts Prince of Wales and York, making a name for himself back in France. Following the British defeat at the end of the American Revolutionary War, La Perouse was appointed by Louis XVI to lead an expedition of discovery circumnavigating the globe. The goal of the expedition was to complete and correct the maps of the Pacific drawn by Captain Cook. La Perouse's two frigates, the Astrolabe and the Boussole rounded Cape Horn and entered the Pacific in 1785. Crisscrossing the Pacific from Macau and Japan to Alaska, Vancouver, and the Hawaiian Islands Perouse made numerous discoveries and adding considerably to the cartographic corpus, particularly along the coast of British Columbia and around Japan. In Australia La Perouse sent his last letter back to France containing all of his maps and research. Tragically, on the return voyage La Perouse ran into a violent storm which left both of his frigates shipwrecked on the Polynesian island of Vanikoro, part of the Santa Cruz Group. Some of the survivors of the shipwrecks seem to have managed to live on the island for years afterwards. As late as 1790 the English Captain Edward Edwards saw smoke signals coming from Vanikoro but foolishly declined to investigate. Expeditions in 2005 and in 2008 identified the remains of both ships and retuned numerous artifacts from the ill-fated expedition to France. The importance of La Perouse's discoveries was, unfortunately, not seriously appreciated until many years later because, when the La Perouse maps were finally published in 1797, newer more accurate maps of the region were already in circulation. Nonetheless, La Perouse remains of the titans of Pacific exploration and he work paved the path forward for all future expeditions to the region.