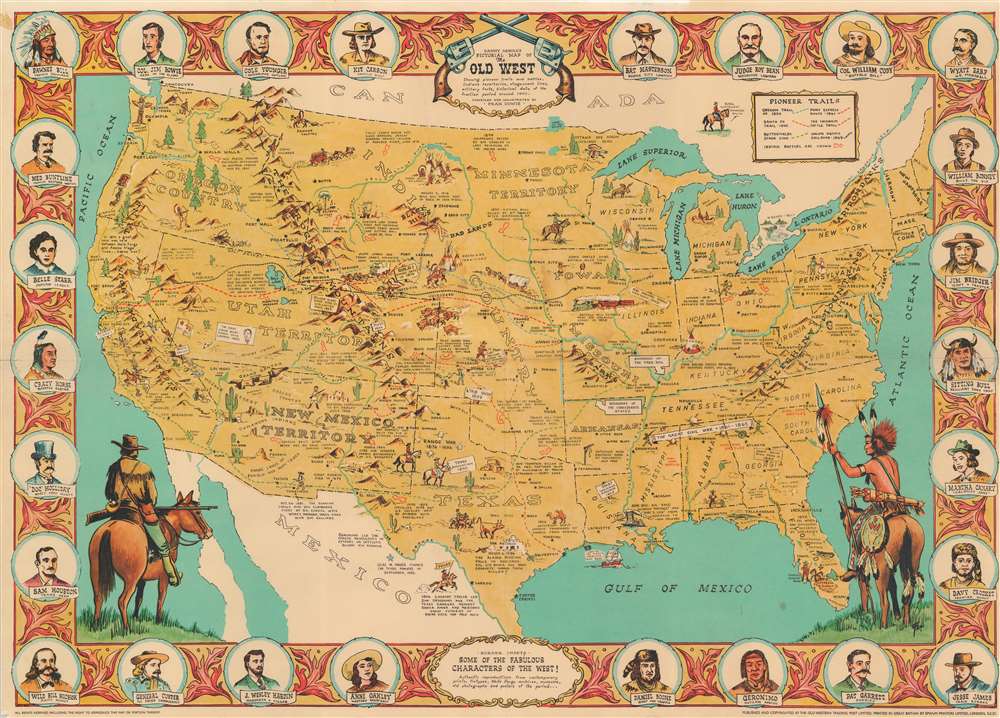 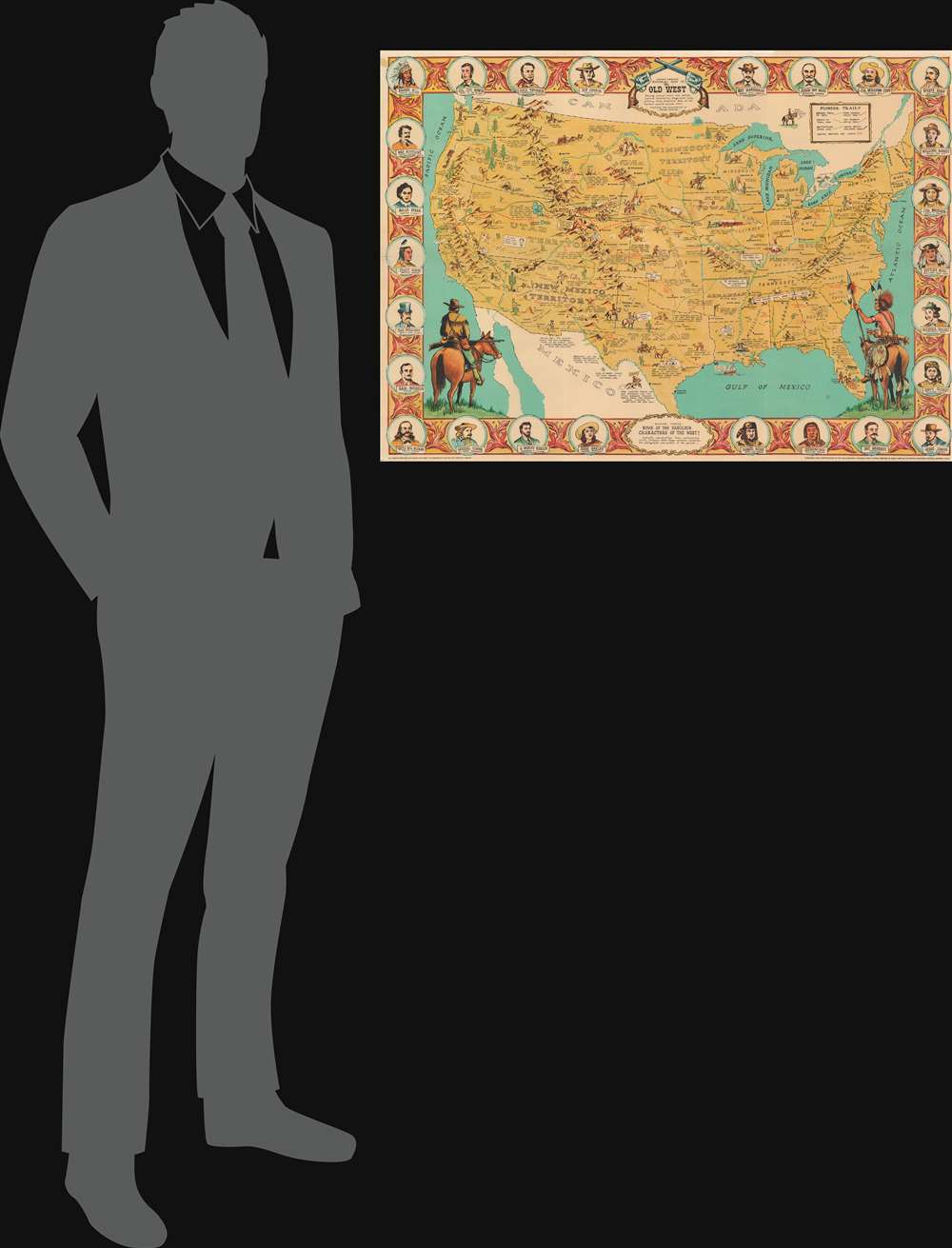 Londoner's take on the Wild West.

This is a c. 1950 Fran Dowie pictorial map of the United States highlighting American frontier history. Captioned illustrations mark important historical events: Battles during the Indian Wars, acts of frontier justice against outlaws such as Jesse James and Billy the Kid, and the shootout at the O.K. Corral, are just a few of the events noted. Pioneer trails, such as the Oregon Trail, the Santa Fe Trail, and the Pony Express Route, are illustrated as well. The Grand Canyon, the Rocky Mountains, and the Sierra Nevada Mountains evoke the majesty of the rugged terrain. The whole is surrounded by a pictorial border incorporating portraits of frontier personalities: Doc Holliday, Crazy Horse, Jim Bowie, Wyatt Earp, Davy Crockett, and Jesse James.

This map was compiled and illustrated by Fran Dowie and published by the Old Western Trading Company in London c. 1950. The present example represents either the first or second edition. The difference between the two appears in the title: one edition is called 'Sheriff Danny Arnold's Pictorial Map…', while the present example drops the title 'Sheriff'. A third edition c. 1963, was issued to capitalize on the popularity of the film How the West Was Won, the first fictional movie produced in Cinerama and widely considered one of Hollywood's greatest epics. We note only a handful of instances when the present edition appeared on the private market. This piece is not cataloged in OCLC.

Francis 'Fran' Dowie (1921 - December 21, 2006) was a Canadian performer, actor, cartoonist, vaudevillian, and puppeteer. Born in Richmond, British Columbia, Dowie came from a family of performers, his grandfather, Frank W. Dowie, founded the first minstrel show to perform at London's Palladium in the early 1900s. Dowie began performing at the age of seven with his father Frank in their comedy duo, performing at Vancouver's Orpheum Theatre. From that point on he never stopped. He was a member of a vaudeville troupe during World War II, called 'The Blackouts' and performed for soldiers throughout Canada, Alaska, and all across Europe after the war ended. While performing with 'The Blackouts' Dowie married Candy Kane (1922 - XXXX), who later was forced to return to Canada after she became pregnant. After the war, Dowie directed productions at the Theatre Royal in Barkerville, British Columbia. At the age of sixty-five, instead of retiring, Dowie began performing as Santa Claus for children. He is best remembered for this role and is widely remembered at 'the Lower Mainland's most beloved Santa'. Dowie also became a puppeteer in his later years and was an active member of the Society for the Preservation of Vaudeville. Dowie is a member of the British Columbia Entertainment Hall of Fame and was one of the first selected for a star on the B.C. Hall of Fame's STARWALK. Learn More...


Daniel Alvin Arnold (July 18, 1919 - May 2000) was a Canadian businessman and artist. Per records found online, Arnold was the director of Old Western Trading Post Limited from 1960 until his death. Learn More...

Good. Backed on archival tissue for stability.
Looking for a high-resolution scan of this?