1650 Jansson Map of the Ancient World 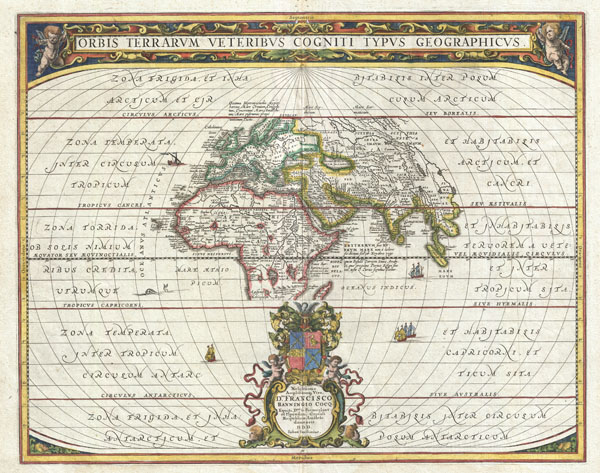 1650 Jansson Map of the Ancient World

An exceptional mapping of the ancient world.

An exceptional 1650 map of the world as it was known to the ancients by Jan Janssonius. Such maps, which filled in contemporary geography with ancient place names, were popular in the post-Renaissance period. Scholars digging through rediscovered Greek and Roman texts needed a geographical reference point for the numerous place names that peppered these works. Such maps began appearing in 16t century. This particular example is a significant reworking of an earlier chart by A. Ortelius. It covers Europe, western Asia, and Northern Africa as well as significant, though blank, portions of the surrounding seas. Jansson has curiously oriented this chart with Africa at the center. As such Europe and Asia seem to take on an almost peripheral role. Countless ancient world place names, most of which are drawn from Ptolemy's Geographica, are included. Jansson also notes all five climatic zones, the frigid zones in the north and south, the habitable temperate zones to the north and south of the tropics, and the inhospitable torrid zone to either side of the Equator. Cartographically this map does not stray too far from the standard model of the period. In Africa the Mountains of the Mood as well as the Likes of the Nile are identified. The Caspian Sea is incorrectly oriented on a east-west axis. Sri Lanka is identified with Tapobrana. In Southeast Asia, the five great rivers of the region are shown to originate from the apocryphal lake known, though not labeled here, as Chaimay. Various fishing, sailing, and merchant ships, as well as the odd sea monster, fill the unknown seas. This example represents the second state of this map with a fully developed dedication at bottom center. The first state of the chart left this area blank. A baroque title area complete with cherubs occupies the upper part of the plate. This chart was published in part 2 of Jansonnius' 1650 Atlas Maritimus or volume 5 in his Atlantis Majoris.