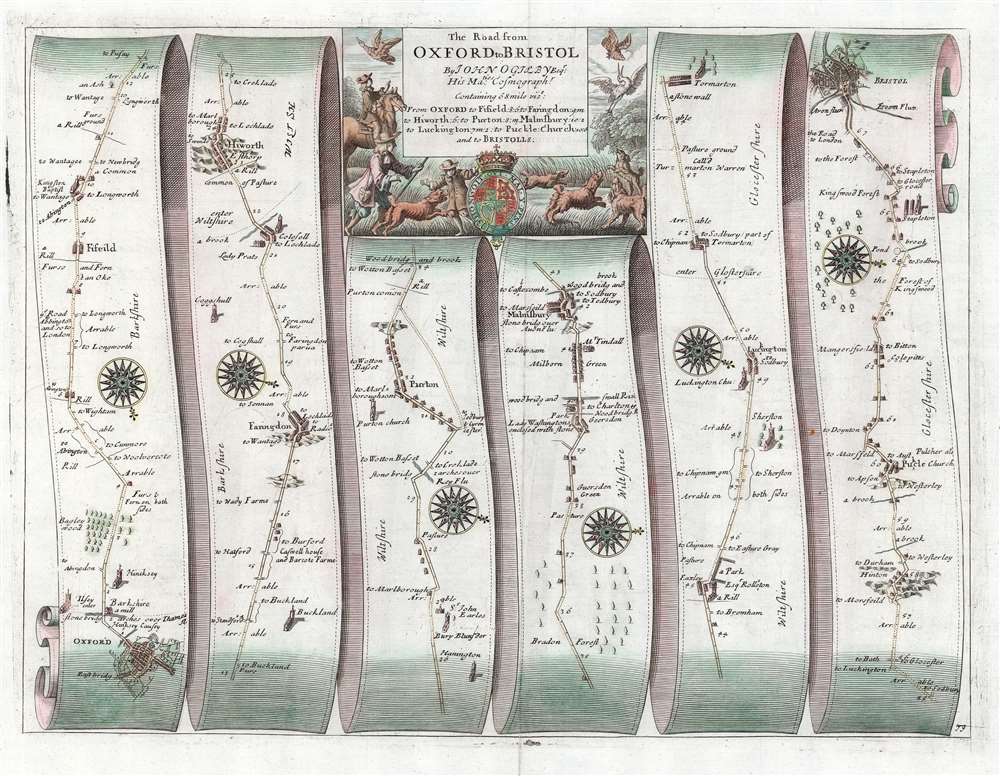 This is John Ogilby's road map detailing the road between the cities of Oxford and Bristol. It is a strip-map, following the road from Oxford south and west in six lengths, presented as if on a single, unspooled sheet of paper. Smaller towns, bridges, forests, churches, and county borders are all noted along the way. Pastures, and even some coal mines are marked as well. Strip maps served to inform travelers of the distances, landmarks, obstacles and resting points along a given road between two destinations. Changes in direction along the way are indicated by the placement of attractive compass-roses. The wise traveler, of course, would never leave the high road; consequently, no further routes would require consideration.

The map's attractive cartouche is embellished with what appears to be a remarkably unsuccessful hunting scene: the mounted hunter, his footmen, and his dogs unable to snare any of the fowl taking wing.

Britannia was based on firsthand survey by Ogilby and his team, who published their results at a uniform scale of one inch to one mile. Of more general importance, Ogilby standardized the English mile throughout his book at 1,760 yards (prior to this, no such uniformity existed in England.) Ogilby's work was the first to utilize strip maps of this kind, but the 18th century would see similar works published by Bowen, Gardner and Senex.

The traveler today consulting a modern, ubiquitous app will be advised to take the A34 south, then switching to the westward M4; this route will bring the Oxford traveler to Bristol in just less than an hour and a half. Ogilby's route via Fyfield, Kingston, Faringdon, Highworth, Cricklade, Malmesbury, Sherston, Luckington, Tormarton, Pucklechurch and Kingswood can be expected to take no less than twenty two hours by foot, and the wise traveler will break this up over several days.

The map was engraved for inclusion in Ogilby's Britannia, Volume the first: or, an Illustration of the Kingdom of England and Dominion of Wales, printed by the author in 1675. The work was reprinted in 1698 with minor changes (including the page numbers on the maps, as is exhibited here. Both editions are well represented in institutional collections. An example of the 1675 issue of this map has been catalogued by Yale University.