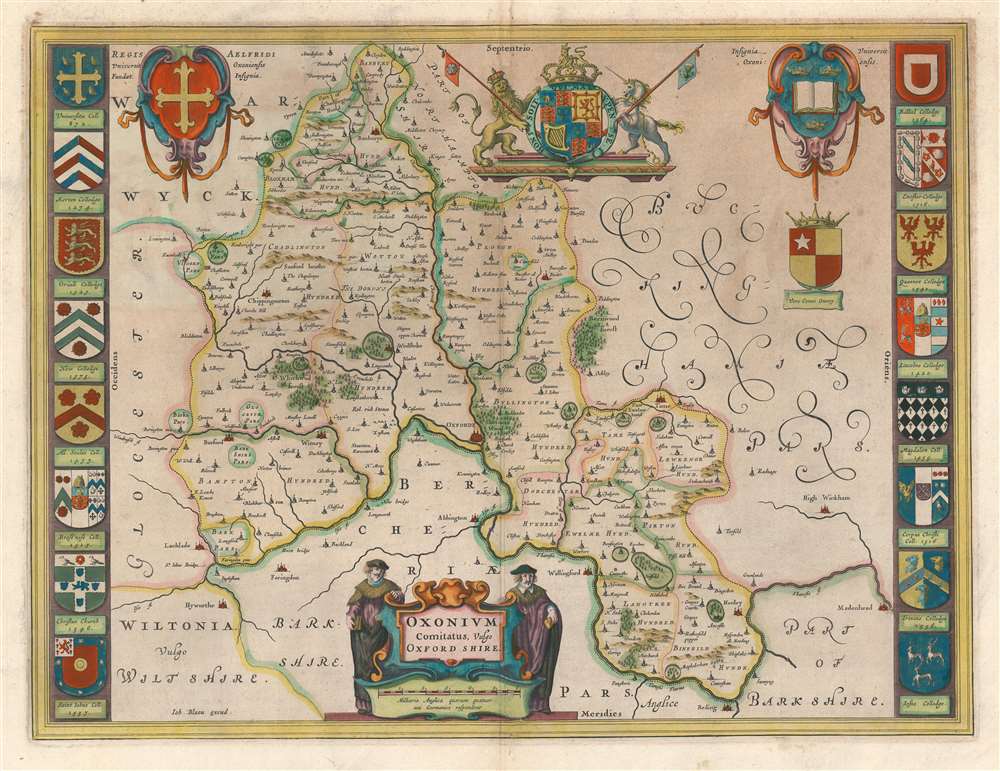 A Sumptuous Example of the Classic Dutch Map of Oxfordshire, with the University's College Arms
$750.00

This is a 1662 Johannes Blaeu map of Oxfordshire, one of the most decorative maps of Oxfordshire and the most desirable Dutch map of a British county. The geography is derived from Speed's map, with the map centered on the city of Oxford, dividing the county into its Hundreds and showing its parks and towns. Blaeu's map shines in its decorative elements: The cartouche, which incorporates both the title and the scales, is flanked by two English scholars in formal garb. The British Royal arms are displayed front and center, but the map is cornered with the arms of King Alfred (with the dubious claim that the king founded Oxford,) the arms of the County, and the insignia of the University itself. The map is bordered with sixteen coats of arms belonging to the University's Colleges. The map is embellished with rich contemporary color.

This is among the maps added to Blaeu's atlases by Willem Blaeu's son and heir, Joannes (or Joan) Blaeu; consequently it is both one of the larger Blaeu folio maps (as the younger Blaeu was using larger plates for his new maps) and one of the scarcer Blaeu atlas maps (as the younger Blaeu's maps appeared in fewer editions of the atlas.) There are seventeen separate examples of this map listed in OCLC, of which only three are from the French edition of the Atlas Maior (from which this example came.)

Blaeu, W. and Blaeu, J., Le Grand Atlas, (Amsterdam: Blaeu) 1662.     In 1662 Joan Blaeu published his masterwork, which has been described as 'the greatest and finest atlas ever published' (Verwey, 1952): his monumental, eleven-volume Atlas Maior. This contained nearly six hundred maps, more than two hundred in excess of the Blaeus' mainstay the Atlas Novus. The former work already being renowned for the quality and beauty of its maps, Blaeu not only would add copious material but would improve the sophistication of his work: many of the newly-added maps utilized larger-sized presses and sheets, and the artistry applied to the engravings was often far superior to that of the earlier maps in the atlas - many of which by now were thirty, and some more than fifty years old. Blaeu's Atlas Maior was published from 1662 to 1672, consisting of some 594 maps compiled into upwards of 9 volumes with some editions containing as many as 12 volumes. This triumphant work's publishing life was cut violently short when, in 1672, the Blaeu's mammoth workshop was destroyed by fire; surviving stock would be sold at auction between 1674 and 1677, occasionally appearing under the imprint of later Dutch printers such as Pieter Schenk and Pieter Mortier. The maps added to the Atlas Maior, owing to their tragically short publishing life, are among the hardest-to-find of the Blaeu maps.