1794 Laurie and Whittle Nautical Chart or Map of the Coast of Coromandel, India 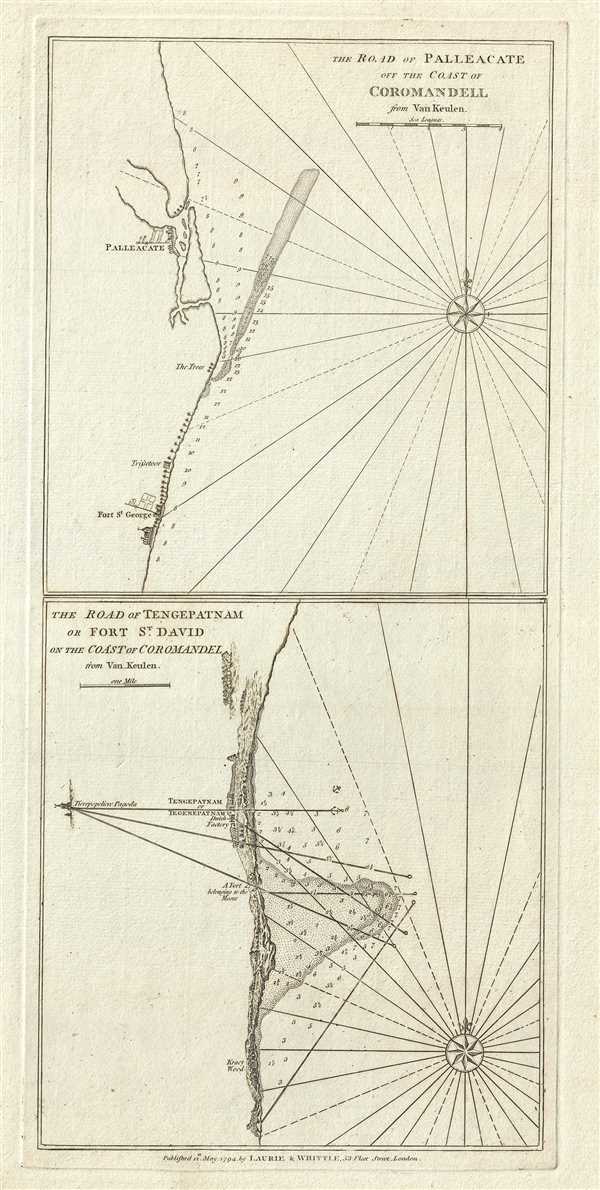 1794 Laurie and Whittle Nautical Chart or Map of the Coast of Coromandel, India

Beautiful maritime map of the eastern coast of India.
$200.00

The location of Fort St. George on the upper map is beautifully rendered. A church, most likely St. Mary's Church, which is the oldest Anglican Church in India, is shown. Founded in 1644, Fort St. George was the first English fortress in India. Over time, settlements around the fort grew to include the neighboring villages and eventually evolved to form the city of Madras or Chennai, which is now one of the most populous metropolitan areas in India. While Fort St. Gorge and the surrounding towns were controlled by the British when this map was drawn, Pulicat, which until 1609 was the capital of Dutch Coromandel, changed allegiances between the Dutch, Portuguese and British until in 1825 when fell fully under the British hegemony.

The map of Fort St. David notes 'A fort belonging to the Moors.' Fort St. David, originally built by a Hindu merchant, was captured by the Marathas in 1677. The English later acquired the fort in 1690 and renamed it to Fort St. David. It would eventually become the British headquarters for all of Southern India.

The map offers rich detail including countless depth soundings, notes on the sea floor, commentary on reefs, rhumb lines, sandbars, shoals, buildings, place names and a wealth of other practical information for the mariner. As noted in the title, Laurie and Whittle derived the map from a much earlier 17th century plan by the Dutch East India Company chart maker Johannes van Keulen (1654-1715). This map was published by Laurie and Whittle from their offices at 53 Fleet Street, London, on May 12, 1794. It was issued independently as well as offered in their 1797 East-India Pilot, or Oriental Navigator.

Laurie, R., and Whittle, J., The East-India Pilot, or Oriental Navigator, on One Hundred and Eighteen Plates: Containing a Complete Collection of Charts and Plans, etc. for the Navigation not only of the Indian and China Seas, but of those also between England and the Cape of Good-Hope; Improved and Chiefly Composed from the Last Work of M. D'Apres de Mannevillette; with Considerable Additions, from Private Manuscripts of the Dutch, and from Draughts and Actual Surveys Communicated By Officers of the East-India Company A New Edition, Containing One Hundred and Five Charts. (London: Laurie and Whittle) 1797.