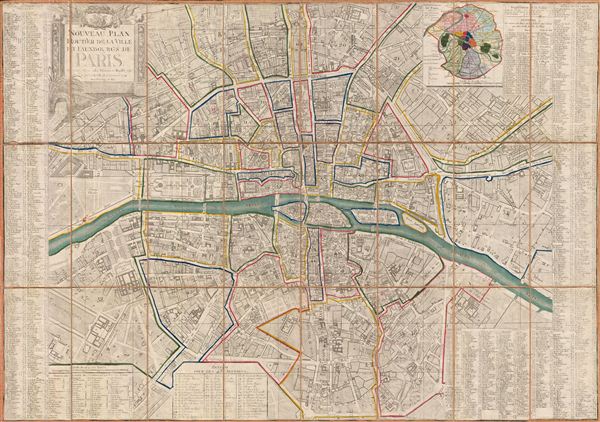 Revolutionary Paris just prior to the rise of the Jacobins and the Reign of Terror.

A fine 1791 dissected pocket map of Paris issued by esnauts and Rapilly. Centered on the Seine, this map depicts Revolutionary Paris just following the 1789 storming of the Bastille. France at this time was in the early stages of the French Revolution. The nation was being governed by the Assemblee Nationale Constituante and Paris by the Paris Commune. Though Revolutionary sentiment was high among the Parisian populace, it had not yet taken on the radicalism that would soon follow. Thus street names and building names here reflect their pre-Revolutionary names rather of the more egalitarian nomenclature adopted later in the Revolution (ie. Palais Royal = Palais de l'egalite). One year after esnauts and Rapilly printed this map the Paris Commune became insurrectionist - refusing to following the orders of the politically dysfunctional Legislative Assembly, leading partially to the Assembly's fall, the rise of Maximilien Robespierre and the Jacobins, and the French Revolution's most extreme and darkest days, known in French as La Terreur or the 'Reign of Terror.'

Unlike many cartographers, esnauts and Rapilly survived and even thrived throughout the French Revolution. This map was first issued in 1777 and updated regularly through the early 1800s, thus offering a fascinating cartographic overview of one of Paris' most dynamic and terrifying historic periods.