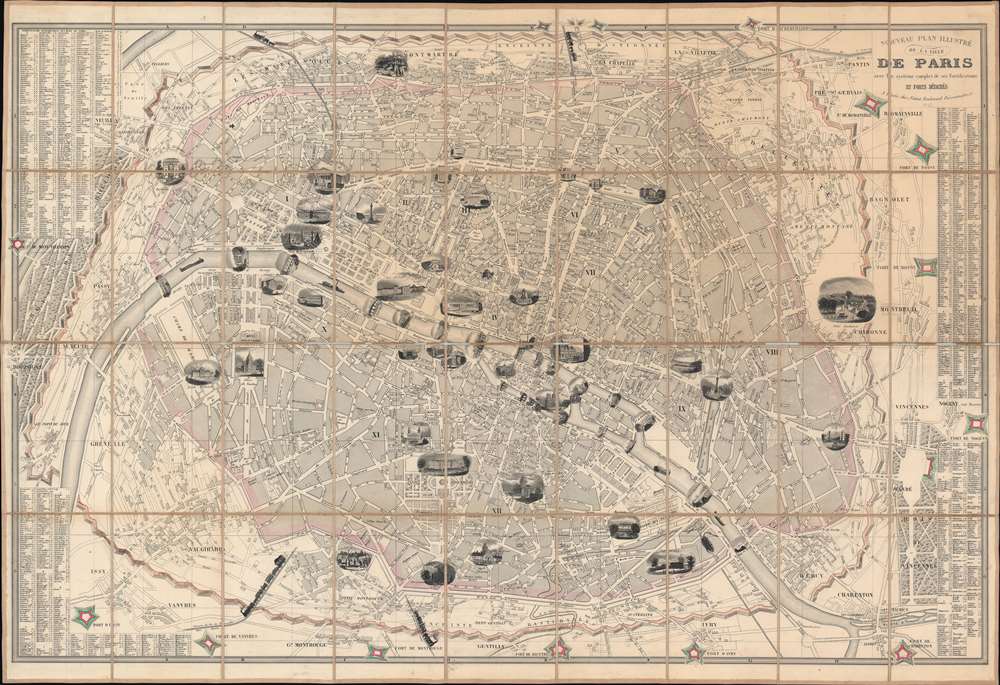 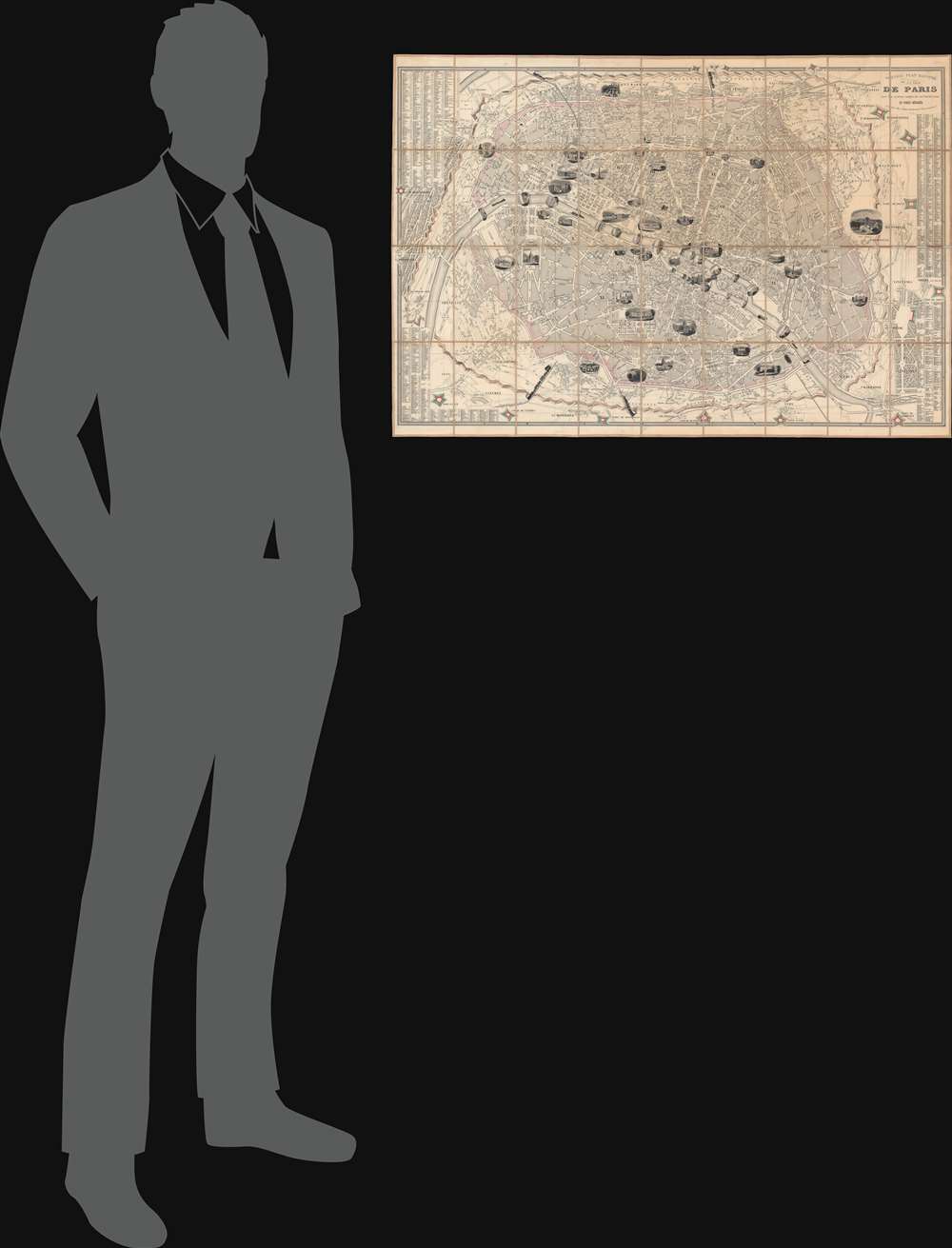 A beautiful 1847 illustrated pictorial map of Paris, France, by Charles Fatout. Centered on the Seine, this map depicts embastilled Paris as contained by the Thiers Wall as well as its immediate vicinity, including the Bois de Boulogne and Bois de Vincennes. Gardens, monuments, and parks are illustrated either in profile or in the form of vignette engravings – making this an ideal companion for the curious traveler. Trains are delightfully drawn entering and leaving the city in four locations.

The 'Haussmannization' of Paris would not begin for nearly another decade, meaning that the warren of small streets that were an integral part of 17th, 18th, and early 19th century Paris still existed. The Arc de Triomphe, l'Avenue des Champs-Elysées, and the Jardin des Tuileries (Tuileries Garden) are all as they appear in Paris today, but the Louvre is different. In 1844, the Palais des Tuileries still stood (until 1871), blocking public access to the Palais du Louvre.

This map exhibits the Theirs Wall shortly after it was completed in 1844. Shocked by the seizure of Paris by foreign enemies during the 1814 Battle of Paris, the French King at the time, Louis-Philippe (1773 - 1850), conceived of a broad network of walls and forts he believed would make Paris impregnable. The project was met with immediate opposition, some of which claimed that the walls were not defensive, but rather intended to control Parisians in the event of an anti-monarchal rebellion. Nonetheless, under a plan prepared by Marshal General Jean-de-Dieu Soult (1759 - 1861), construction began in 1841. The completed fortifications, named the Thiers Wall after the French Prime Minister at the time, Adolphe Theirs (1797 - 1877), were, at enormous expense, completed in 1844. The walls were thirty-three kilometers long and consisted of ninety-four bastions, seventeen gates, twenty-three minor road crossings, and eight railroad gates. By 1919, advancements in military technology made the walls obsolete, leading them to be fully deconstructed by 1929 and replaced with the Boulevard Périphérique.

This map was published in many editions and variants from about 1845. Some attribute the engraving work to Alexandre Amié Vuillemin, and it is indeed in his style, but the present map is unattributed. The 1846 edition appears at the BNF, but we have been unable to locate another 1847 in institutional collections. We are aware of one other in private hands.

Charles Fatout (18?? - 1882) was a French engraver, bookseller, second-hand bookseller, map seller, print seller, bookbinder, and stationer active in Paris during the second half of the 19th century. From about 1840 he was based at Boulevard Poissonnière 17, an office he may have shared with other engravers and publishers of the period. In addition to his private work, he was also employed as a senior clerk under Damascène Morgand (1840 - 1898) in the second-hand book department of the Auguste Fontaine firm, Passage de Panoramas. In 1875, Morgand separated from Fontaine, and taking Fatout along, took over the bookshop of M. E. Caen, founding, 'Librairie Morgand et Fatout' at 55 Passage des Panoramas. Fatout is described in period literature as 'cold and calculating' leading to the success of his firm. Following Fatout's death in 1882, 'Morgand et Fatout' was formally dissolved, but the firm continued under 'Morgand' until 1897. At this time, himself ready to retire, Morgand sold the business at auction to Abbé Bossout, H. Destailleur, and Émile Müller. Learn More...