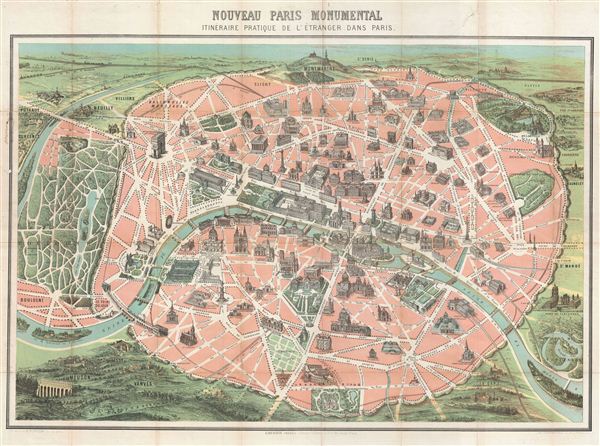 The earliest known example of this iconic map and view of Paris.

This is an iconic 1878 tourist pocket map of Paris, France – we believe the earliest example of this map. Presented as a same field birds-eye view, this map centers on the Seine River, and covers the embastilled heart of modern Paris. The map features important monuments and buildings rendered pictorially, including the Arc de Triomphe, the Opera, the Pantheon, etc. Paris itself is set as if in a verdant garden surrounded by the Bois de Boulogne and various suburban villages. In the north, under a blue sky rolling hills stretch indefinitely into Normandy and possibly the english Channel. The regions outside the walled city are mostly in view format, with a horizon in at top and trees, buildings, and bridges shown in profile. The overall effect sends a message to the view, Paris is not just as collections of streets and alleys, but an 'assemblage of enduring monuments' (Conley), a tableau of modernity punctuated, by a long and fascinating history as a center of commerce, education, arts, and culture.

This map was issued in multiple editions well into the 20th century. We believe the present example to be the earliest known edition. Though undated, this map was most likely first drawn for the third Paris World's Fair (exposition Universelle) of 1878, the grounds of which are identified here roughly where the eiffel Tower stands today. It was at this exposition that the Statue of Liberty, only partially complete, was first presented to the world. Both the eiffel Tower and the Basilique du Sacre-Coeur, built after the making of this map, are not featured here. In later years, once construction on the Paris Metro got underway, this plan was embraced by numerous publishers as a composite tourist guide and metro map. Of course, given the date there are no metros yet extant, however, its cooption as Metro Map elevated this presentation of Paris to iconic status. engraved by F. Dufour and printed by Dufrenoy. Published by Garnier Frères of 6 Rue de Saints-Peres, Paris.