1867 Guesnu Map of Paris and its Monuments, France 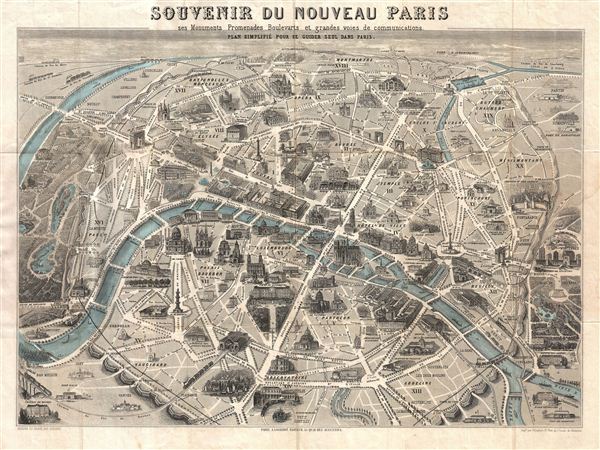 1867 Guesnu Map of Paris and its Monuments, France

One of the most appealing tourist view maps of Paris to appear in the mid-19th century.

An exceptional 1867 monumental map and view of Paris, France. Drawn by Henri Guesnu, this map, as the title suggests, is a map of the 'New Paris,' as redesigned and rebuilt under Napoleon III by Baron Geroges-eugene Haussmann. Known in French as the Grands Travaux, Haussmann's redesign of Paris defined it as a modern city, with narrow alleyways and confusing streets replaced by a broad network of grand boulevards, imposing facades, parks, and monuments. This map, which was prepared with the tourist in mind, shows major monuments in profile and is one of the earliest and most appealing examples of its genre. Published by A. Logerot of 55 Quai des Augustins, Paris.

Hilaire Guesnu (1820 - 1868) was an engraver and printer active in Paris during the mid-19th century. He worked with a number of publishers active at the time, including Logerot. Cartographically he is known for two exceptionally desirable view maps of Pairs, his tourist monument map of Paris, and a view of Paris from the Bois de Boulogne.


Auguste Logerot (fl. c. 1839 - c. 1880) was a French map and general interest publisher active throughout the mid to late 19th century. A. Logerot worked with other French publishers, cartographers and engravers of the period including Fremin, Dufour, Dyonnet, and Vuillemin. He published a large corpus of map and geographical atlases, though few of his map represented unique or exceptionally interesting work. This exception are his wonderful jigsaw puzzle maps - a style popular in 19th century France. Jigsaw puzzle maps are a kind of educational map printed on board and carved up in puzzle format. Logerot's imprint is frequently misprinted as Lagerot or Logeret. Logerot shared offices with several other publishers, printers and engravers at Quai des Augustins 55, Paris. Little else is known of Logerot's life and work.

Very good. Original fold lines exhibit some wear. Old closed repair from top through 'u' in 'Souvenir' extending 1/3 of the way into the page - not exceptionally noticeable - see image. Folds into original binder.