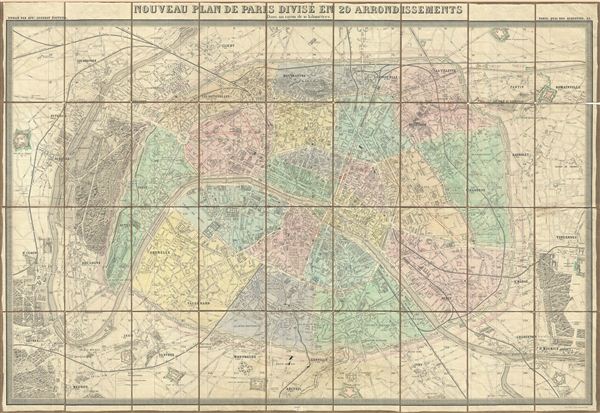 This is a large 1860 pocket map of Paris by A. Logerot. It covers the embastilled center of Paris as well as its immediate vicinity, including the Bois de Boulogne and Bois de Vincennes. Fine detail is present throughout the map, with important buildings and monuments, gardens, rivers, roadways, and various other topographical features are identified. Color coded by arrondissement. All text is in French. A table on the upper left quadrant notes the various districts and neighborhoods in Paris. The fortifications surrounding Paris are particularly highlighted.

Paris, at this time, was undergoing a major urban renewal project under the direction of Baron Georges-eugene Haussmann. This project, begun in 1853 and completed in 1870, called for new regularly updated maps of Paris. The use of the term 'Nouveau Plan de Paris' for most maps published during and shortly after this period thus become common. Haussmann's renovations transformed the mediaeval city and created the Paris we know and love today - a city of broad spacious boulevards and lively street side cafes. Some of tse renovations are shown in manuscript, an update that we have seen on several examples of this map suggesting it is the work of the publisher.

Logerot first issued this map in 1859 and updated annually it through the 1880s. This is the second edition, 1860.