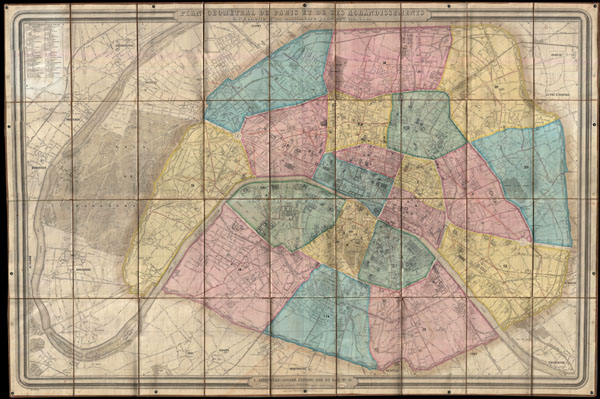 A stunning achievement, this 1860 map by Andriveau-Goujon is the largest folding map of Paris we have ever encountered. Measuring some 41 x 62 inches, this massive plan covers from Saint Cloud to Charenton, inclusive of the full curve of the Seine, the Bois de Boulogne, and the embastilled center of Paris. This map was drawn, as the title suggests, to illustrate Haussmann's 'agrandissments' or renovations of Paris under Napoleon III. The detail throughout is nothing short of astounding with every street, park, square, important building, bridge, and monument duly noted. Haussmann's proposed renovations are especially emphasized with his trademark grand boulevards intersecting with and often overlapping older streets and squares. The central portions of Paris are highlighted in Andriveau-Goujon's distinctive pastels and are numbered according to arrondissement. The whole is dissected and mounted on linen in thirty six panels and can be neatly folded into its original linen binder. This map is clearly meant to be unfolded and displayed on a wall and to facilitate this mounting eyelets have been set into the margins of the map. Andriveau-Goujon issued this map in several editions from 1858 to 1869. This is the second state and possibly the rarest being the only example of the 1860 edition we have identified in any collection, public or private. An extraordinary find.