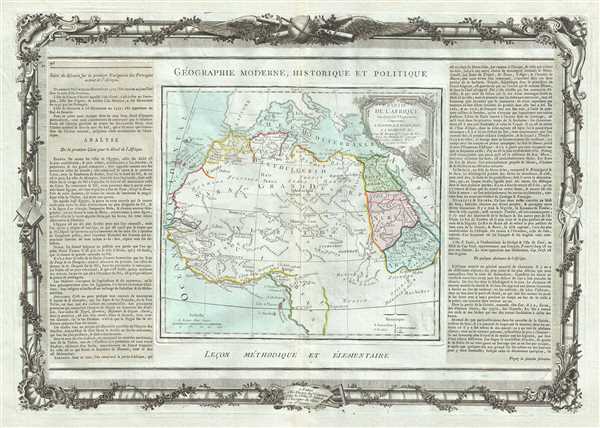 Decorative map of the northern part of the African continent.
$300.00

This is a desirable 1786 map of northern Africa by French cartographer Louis Brion de la Tour. It covers the northern portion of Africa from the Maghreb or Barbary Coast south as far as Gabon.

Like most maps of Africa from this period, the whole is rife with speculation. The White Nile flows south into the Ptolemaic Mountains of the Moon. According to Ptolemy, the Mountains of the Moon lay near two great lakes that were source of the White Nile. Today some regard this range and its lakes as speculative, but more likely it represents Ptolemy's very real knowledge of Lake Victoria and the Rwenzori Mountains.

A beautifully engraved title cartouche adorns the top right quadrant of the map. To the left and right of the map are paste downs of French text with remarks and description of the map. Surrounding the whole is an elaborate decorative border featuring floral arrangements, surveying tools, elaborate baroque scalloping, and a winged globe. This map was issued as plate no. 46 in the most deluxe edition of Desnos’ 1786 Atlas General Methodique et Elementaire, Pour l’Etude de la Geographie et de l’Histoire Moderne.