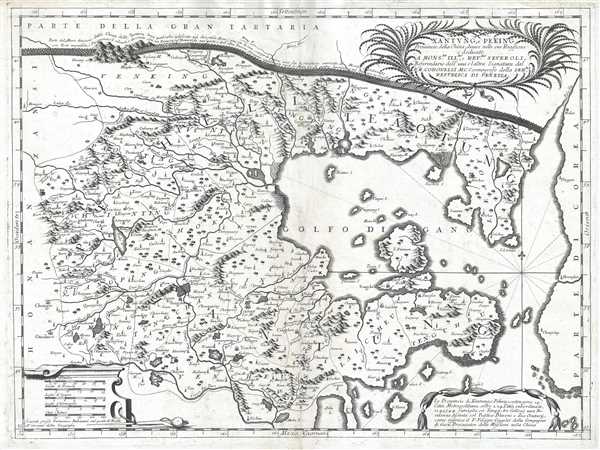 Depicts the Great Wall of China.

This is a c. 1690 Vincenzo Maria Coronelli map of the Xantung (Shandong) and Peking (Hebei) provinces in China. The map depicts the region from Henan and Shanxi Provinces to the Korean Peninsula and from Inner Mongolia to Shandong Province. Highly detailed, numerous cities, towns, and villages are labeled throughout, including Beijing and Tianjin. An incredible rendering of the Great Wall of China traverses the top of the map and includes a caption giving some information about the Wall itself. Rivers, lakes are illustrated and labeled, including the Yalu River. Mountains and forests populate the countryside, and islands are depicted in the Bohai and Yellow Seas. A decorative title cartouche is situated in the upper right corner that includes a dedication to Severoli. A second decorative cartouche in the bottom right corner includes a short text about the region, and a third cartouche in the lower left corner houses the scales.

Coronelli most likely compiled this map from work by Joan Blaeu, and maps created by the Jesuit missionary Martinus Martini. Since the beginning of the 17th century, Jesuit missionaries had been exploring in China and forging relationships with the Chinese emperors and other elites. One way in which the missionaries gained favor was through their knowledge of astronomy, geography, and cartography. Both Blaeu and the Jesuit missionary Martinus Martini published maps of this region in the mid-17th century. Martini was the first European to publish maps of China in Europe since Marco Polo. Jean Baptiste Bourguignon d'Anville noted in his Mémoire that 'Martini made use of the maps which the Chinese possessed at the time.' By having access to Martini's and Blaeu's maps, Coronelli was able to update their maps with more inland detail.

This map was produced and published by Vincenzo Maria Coronelli in his Corso Geografico Universale c. 1690.