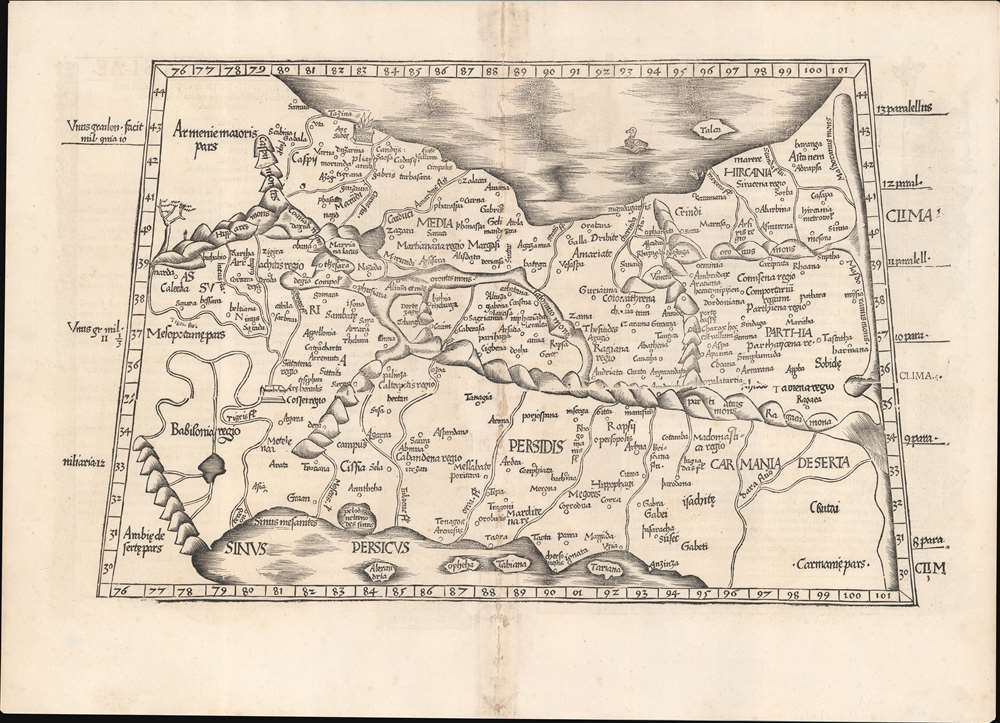 This is a 1535 Laurent Fries Ptolemaic 'Fifth map of Asia,' one of the earliest generally acquirable maps of the Persian Empire. The map spans from Mesopotamia - the valleys of the Tigris and Euphrates Rivers - to a mountain range roughly corresponding with the Masjed Mountains of easternmost Persia, embracing modern-day Iran, Iraq, the Caspian Sea, and the Persian Gulf.

Even at the time Ptolemy recorded the toponomy of this region, the mapped area was ancient. The ancient Persian capital of Persepolis is identified, despite it having been burned by Alexander the Great following the battle of Gaugamela more than four hundred years prior. The ruins of a Temple of Hercules appear on the Tigris River. A 'Temple of Sabae' on the shore of the Caspian Sea, its crest wreathed in flame, may represent the Fire Temple at Baku.

Laurent Fries' maps, though for the most part faithful renditions of Waldseemüller's 1513 Ptolemaic maps, often includes decorative elements not present in their precursors. Occasionally the meaning of these is plain, but the presence of a great tree at the headwaters of the Tigris River, a dragon in the mountains north of Ozoa, and a majestic duck swimming the waters of the Caspian are opaque to us.

The Heresy of Michael Villanovus or 'Servetus'

Following Fries' two Strasbourg editions of his Ptolemy in 1522 and 1525, the blocks were acquired by Lyon publisher Treschel who produced an edition in 1535. The verso text throughout this edition was written by Servetus, who would be denounced as a heretic in 1553, possibly at the direct instigation of John Calvin. Found guilty by trial of nontrinitarianism and anti-paedobaptism, Servetus was burnt alive on October 27, 1553 atop of a pyre of his own books, among them most examples of the atlas from which this map was extracted.


Lorenz Fries (c. 1490 – 1531) was a German cartographer, cosmographer, astrologer and physician based in Strasbourg. Little is known of Fries' early life. He may have studied in Padua, Piacenza, Montpellier and Vienna, but strong evidence of this is unfortunately lacking. The first recorded mention of Fries on a 1513 Nuremberg broadside. Fries settled in Strasbourg in March of 1519, where he developed a relationship with the St. Die scholars, including, among others, Walter Lud, Martin Ringmann and Martin Waldseemüller. There he also befriended the printer and publisher Johann Grüninger. Although his primary profession was as a doctor, from roughly 1520 to 1525 he worked closely with Grüninger as the geographic editor of various maps and atlases based upon the work of Martin Waldseemüller. Although his role is unclear, his first map seems to have been a 1520 reissue of Waldseemüller's world map of 1507. Around this time he also began working on Grüninger's reissue of Waldseemüller's 1513 edition of Ptolemy, Geographie Opus Novissima. That edition included three new maps by Fries based upon the Waldseemüller world map of 1507 – two of these, his maps of East Asia and Southeast Asia, are quite significant as the first specific maps of these regions issued by a European publisher. In 1525 Fries decided to leave Strasbourg and surrendered his citizenship, relocating to Trier. In 1528 he moved to Basel. Afterwards he relocated to Metz where he most likely died. In addition to his cartographic work, Fries published tracts on medicine, religion, and astrology. Learn More...

Good. Filled wormholes along centerfold with some loss. Otherwise a generous-margined example with a bold, sharp strike.