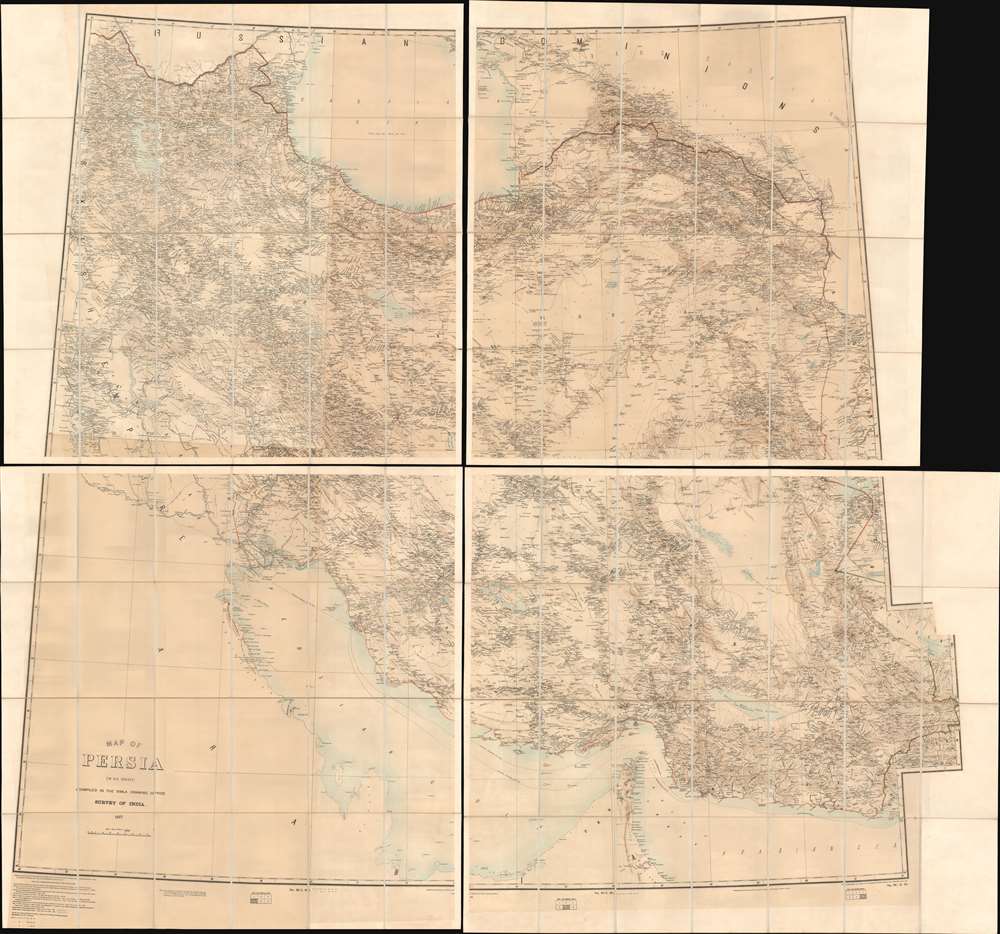 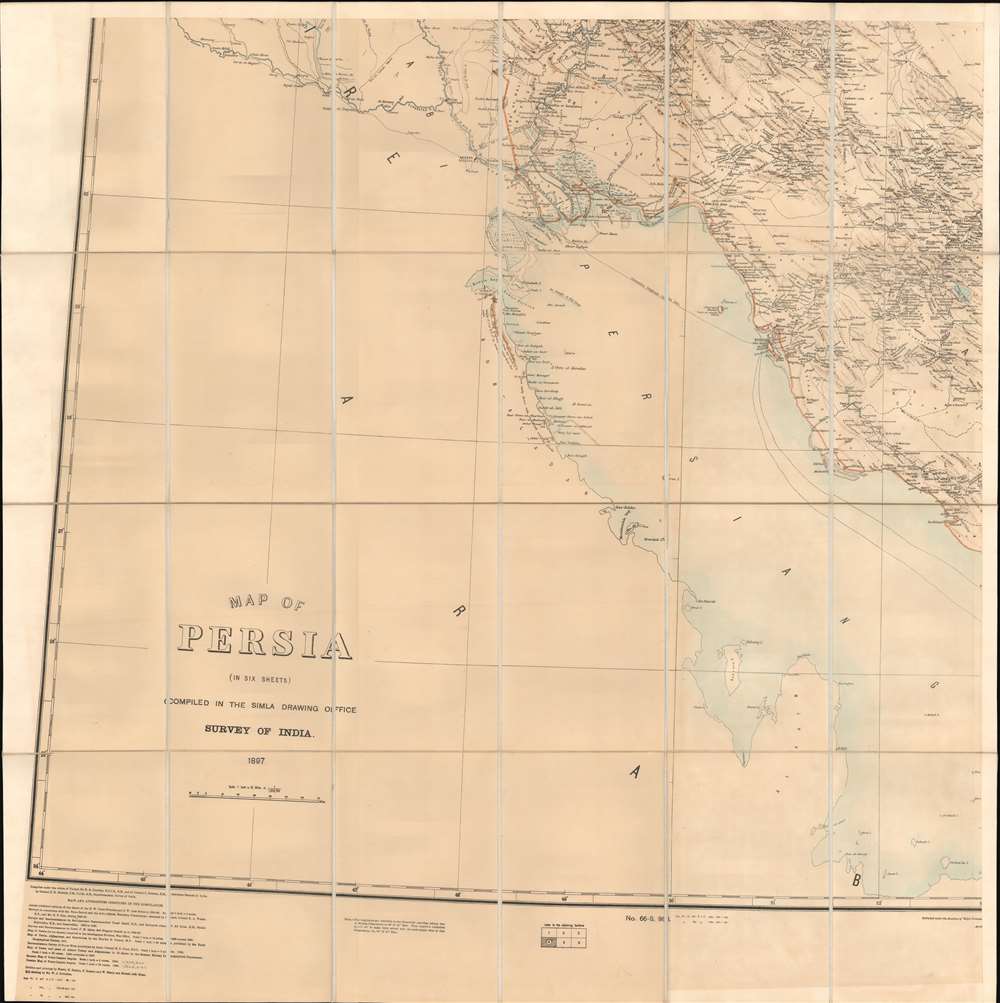 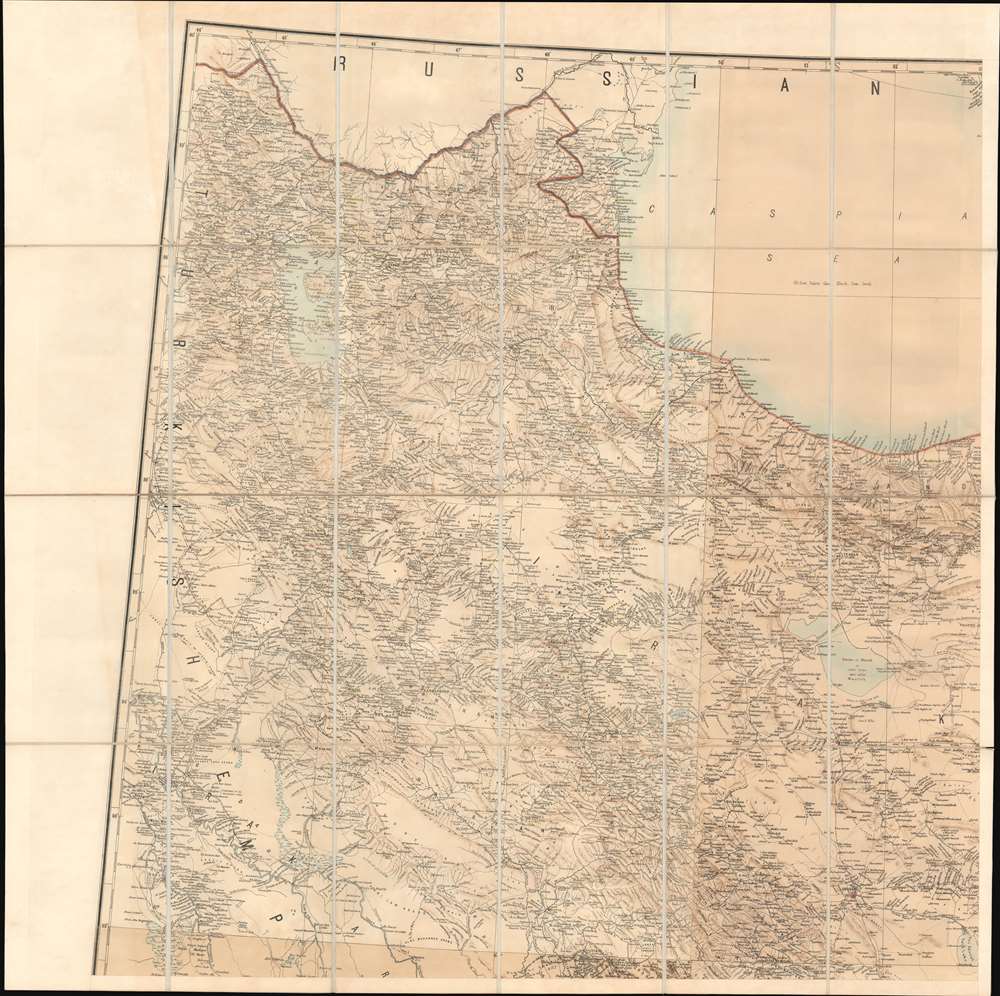 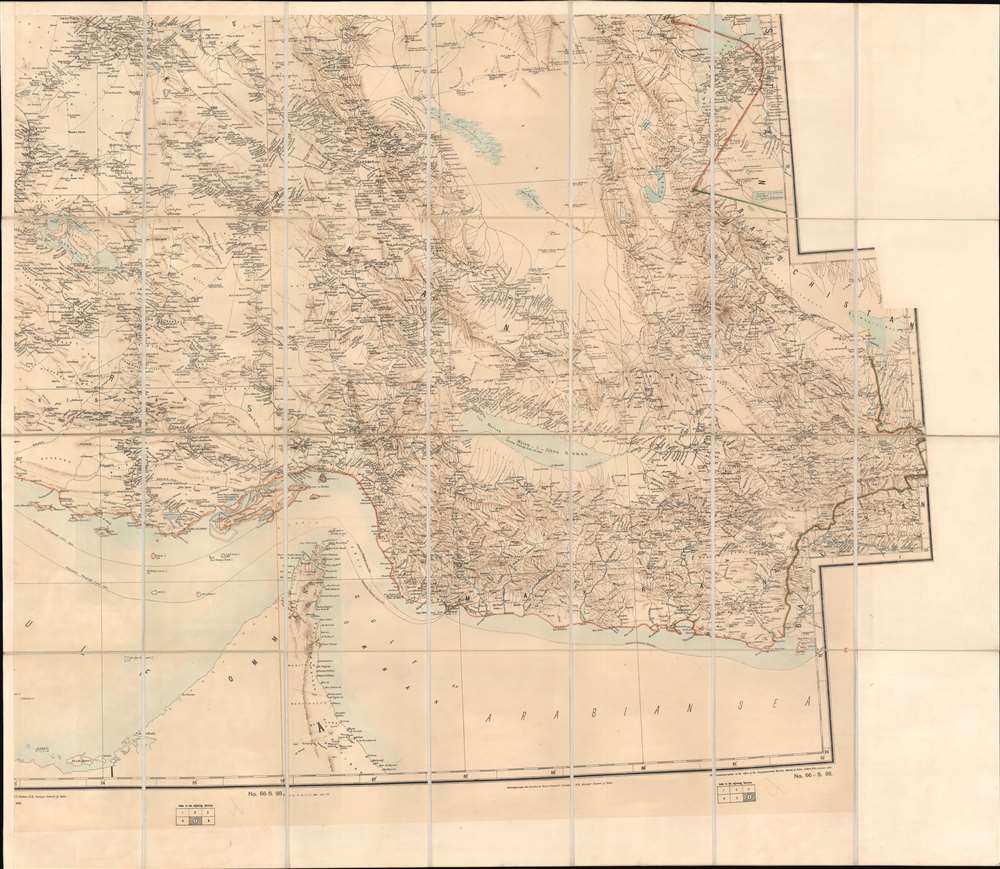 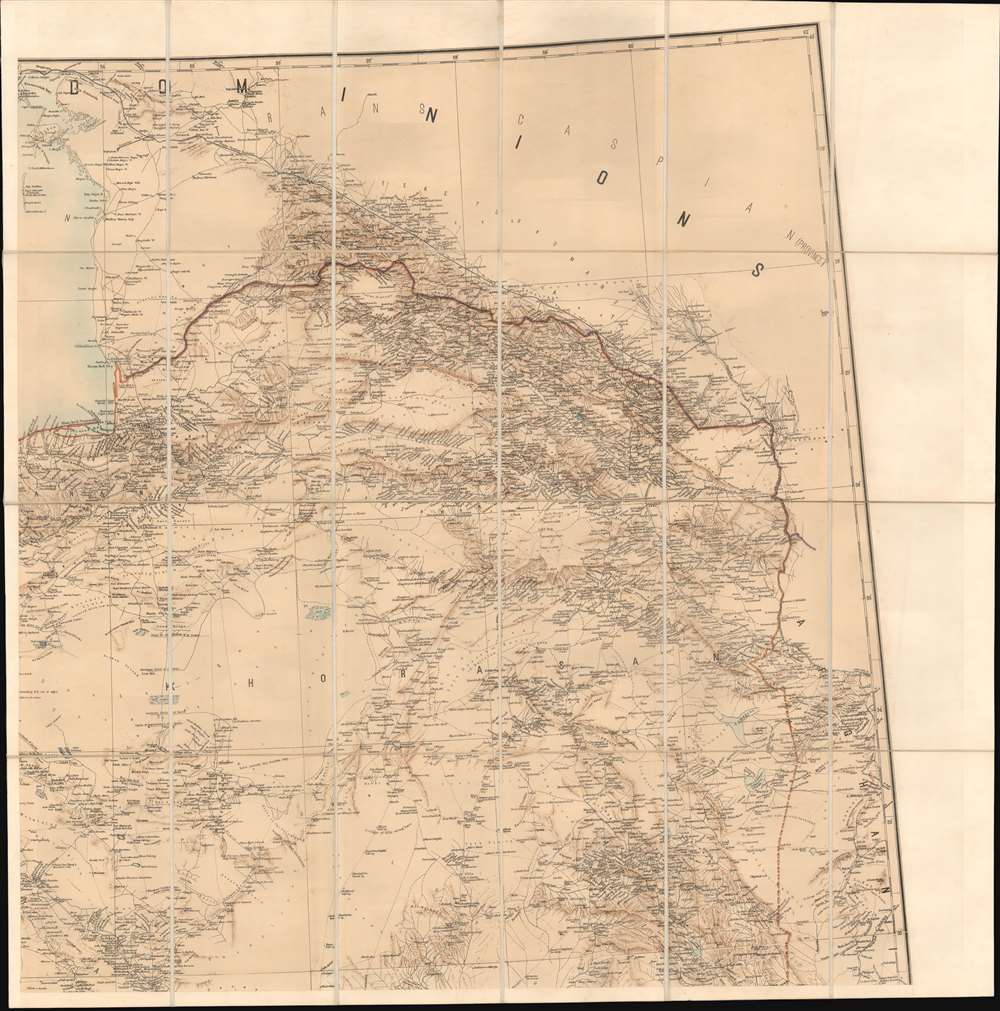 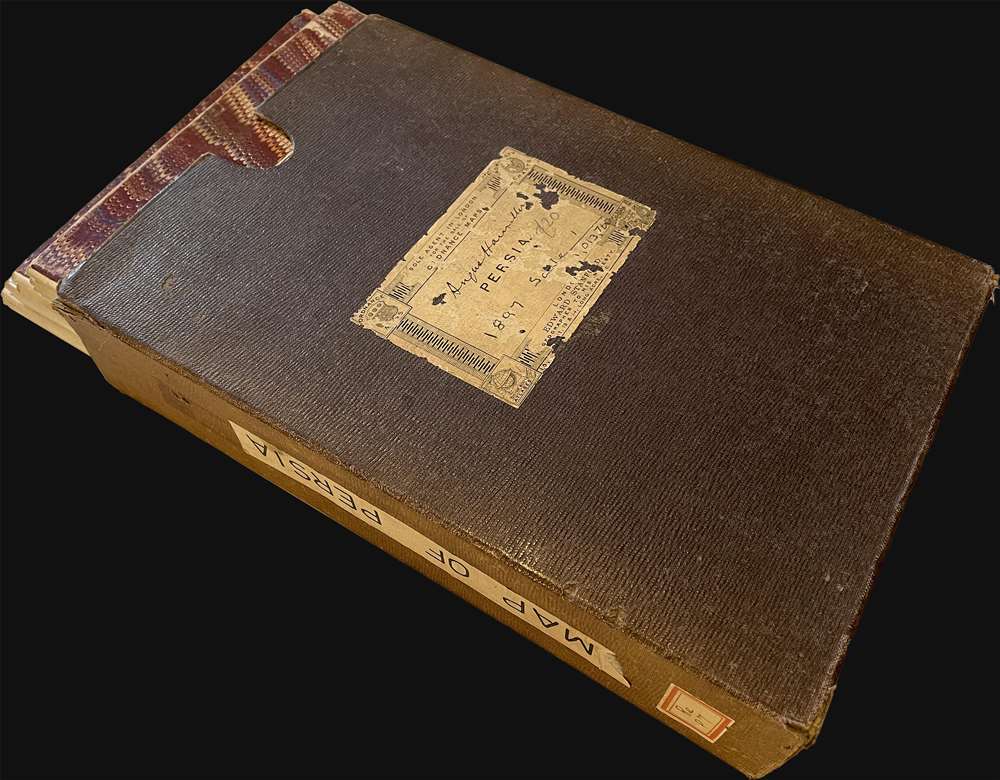 This massive, six-sheet map of Persia produced in 1897 by the British Survey of India (updated to 1902) was the most detailed map of what is now Iran, Iraq, and parts of Azerbaijan and Turkmenistan that had been executed to date: we are aware of no comparable map prior. Its exhaustive detail would continue to command respect well into the 20th century: the German military faithfully copied this map in 1918, as they did with other British maps of important theaters in the Great War.

The map was printed in color to six large sheets which were then dissected and mounted on linen to form four folding quadrants, three of twenty-four panels and one of twenty-eight. The map's scope includes Baghdad and the borders of the Turkish Empire to the west, and reaches eastwards to Afghanistan and Baluchistan (now part of Pakistan.) Barring part of the coastline near Kuwait and the portion of Oman overlooking the Strait of Hormuz, the Arabian Peninsula does not enjoy detail on this map, whose focus is ends at the southern limits of Persia. The north is marked out with the southern domains of the Russian Empire, and the southern part of the Caspian Sea. The map is printed in black and sepia, with hand wash and outline color added. Topography is shown pictorially, with the height of many peaks noted. Roads, railways and telegraphs are marked out. The map's rich yet clearly legible detail extends to notes extending to key mountain ranges and passes through them, caravan routes, marshes, ruined structures and towns, tombs, and religious sites.

Telegraph lines can be seen running from the northwest corner of the map to Tabriz, to Tehran, and then branching out to meet Isfahan, and down to Bandar-e-Jask on the Gulf of Oman. These were not a new feature - the Indo-European Telegraph had been in operation since around 1870 - but the administration of the telegraph led necessarily to the posting of a great many British officials throughout Iran - employees attached to boundary commissions, both pursuant to the laying of telegraph wires themselves and to execute patrols of existing lines. Surveys attached to the telegraph between 1870 and 1872 helped establish Iran’s border with British India, for example. Features on the map not otherwise evident - for example, the boundary between 'Irak and Fars,' south of Isfahan - are made clear along the telegraph route that crosses them. Officers of the Indo-European Telegraph Department would be granted extraterritoriality privileges, essentially becoming informal political officers scattered throughout Iran. Certainly, the reports of telegraph officers would have been included in the detail supplied to the Survey of India, whose maps were essential tools in Britain's prosecution of The Great Game. It is not a stretch to say that the execution of this map would have not been possible prior to the British expansion of telegraphy into Persia.

Island Territoriality and the Submarine Telegraph

British telegraphy did not rely entirely on land lines. There were several lines laid along the length of the Persian Gulf, and along the Iranian coast of the Arabian Sea. While the map for the most part only sketches in the Arabian coastlines, a number of islands throughout the Persian Gulf are mapped: including Abu Musa and the Tunb Islands near the strait of Hormuz, which are to this day disputed between the Arab states and Iran. One difficulty in this dispute is that the printed map record has consistently marked these islands with the coloration associated with the Iranian mainland, as is the case on this map. This is not accidental: Britain long supported Persian claims to the islands, and viewing their proximity to the submarine cables it is not difficult to guess why they might. The telegraph aside, Britain's efforts to extend influence throughout the region would lead to their siding with Persia on many such territorial disputes.

At the upper limit of the northeastern quarter of the map can be found the Transcaspian Railway, running from the Caspian port of Krasnovodsk (now Türkmenbaşy in Turkmenistan) to Askabad, Tejend, and off the map towards Merv (now Mary.) This railway, begun in 1879, would eventually extend to Samarkand, connecting Russia's domains along the borders of Persia and Afghanistan. Although its purpose was ostensibly to enforce local control, it was a source of alarm to some British leaders: Lord Curzon would allocate an entire chapter in his book Russia in Central Asia to discussing the perceived threat to British control of India posed by the railroad, as it connected Russia with Central Asia's most wealthy and influential cities and would facilitate the rapid deployment of Russian military along the borderland. Curzon also believed that the rail connection would increase economic interdependence between Russia and Central Asia, to Britain's detriment in the 'Great Game,' then in full flower.

The Great Game - The Struggle for Afghanistan'The Great Game' was a diplomatic confrontation between the British and Russian Empires over Afghanistan and other territories in Central and Southern Asia. The conflict, rooted in long-standing animosity between Russia and Britain, revolved around Afghanistan, which, while lacking significant resources, was strategically situated. For its part, Russia feared Britain was making commercial and military inroads into Central Asia, an area that had long fallen within the sphere of St. Petersburg. Britain, conversely, feared Russian incursions into India, 'the jewel in the crown' of British Asia. The escalating tensions led to several wars and proxy wars: The First Anglo-Afghan War (1839 - 1842), the First Anglo-Sikh War (1845 - 1846), the Second Anglo-Sikh War (1848 - 1849), and the Second Anglo-Afghan War (1878 - 1880), along with the Russian annexations of Khiva, Bukhara, and Kokand. Then as now, Afghanistan proved a grinding stone on which the great empires of the world diminished themselves, none achieving a definitive victory while wasting massive resources. The Great Game ended on September 10, 1895 with the signing of the Pamir Boundary Commission Protocols, which stabilized the border between Afghanistan and the Russian Empire.

Photozincography, sometimes referred to as heliozincography or simply zinco, is a monochromatic reprographic process developed in the mid-19th century by Sir Henry James (1803 - 1877). The process was embraced by the British Ordnance Survey and the empire's far-flung survey offices, such as the Survey of India, due to its ability to reduce large-scale surveys maps and manuscripts without costly re-engraving. The system offered an additional advantage over traditional lithography, as it used lightweight zinc printing plates instead of heavy lithographic stones. They could thus be handled and transported efficiently, making them ideal for mobile and military use. Photozincography began to decline in Europe the 1880s, as more sophisticated printing technique emerged, but the process remained popular in survey offices in Asia, India, and Africa until the early 20th century.

This map was first issued in 1886 by the British War Office in London. That map was at first inferior to an earlier Russian map issued by I. Stebnitsky, but was revised and improved in 1891, mainly using the new material supplied by the Surveyor General of India. In 1897, the map was redrawn and reissued with significantly greater detail by the Survey of India at Simla, a division of the Quartermaster Generals Office (QMG). At the time the Survey of India was under Colonel Thomas Hungerford Holdich (1843 - 1929), Colonel Sir Henry Ravenshaw Thuillier (1838 - 1922), and Colonel C. Strahan. It was printed by photozincograph in Dehra Dun by H. Sindon, F. Rozario, W. Manly, and Munshi Jafir Khan. Subsequent editions followed, with the present example having been updated to 1902. Examples are extremely rare. We have identified only two aside from present example. These are located at the National Archive at Kew and the Staats- und Universitätsbibliothek Dresden.


India Quartermaster General Office (1803 - 1947), a major branch of the QMG, was the division of the British Indian Army responsible for logistics and mapping. Among other duties, the QMG employed detachments of military engineers to conduct and compile surveys of conflict theaters. The QMG was based in Calcutta, but established several annex branches, in Simla (Himachal Pradesh, India), Colombo, and elsewhere. Master cartographers, surveyors, and draftsmen under the QMG traveled throughout British India and the adjacent regions, compiling detailed surveys in anticipation of trade, war, or both. Working in diverse and sometimes onerous conditions, they developed sophisticated cartographic conventions while at the same time adapting to local supplies and resources. Some, for example, have noted the QMG maps often have resplendent bright color - these are palettes adapted from Indian handmade watercolors traditionally used in the Bengali textile industry. These attractive colors were later adapted into the general British cartographic palette. Few QMG maps were ever published, most surviving only in manuscript, in institutional archives like the British Library’s India Office Records. Moreover, despite their significance, no comprehensive survey of surviving of India QMG maps has been compiled, resulting in their being generally underappreciated and misunderstood. The QMG remained active in India until the British withdraw in 1947. Learn More...