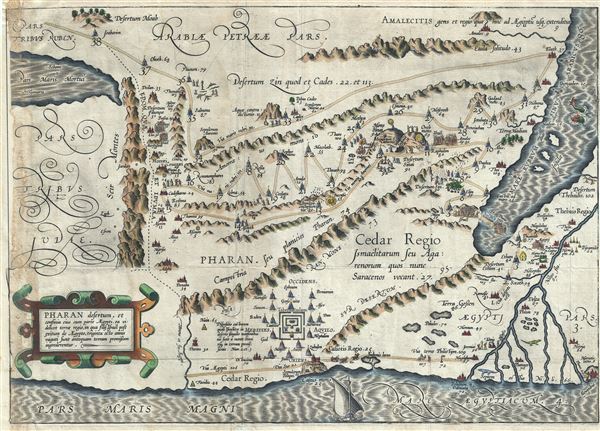 This is a beautiful and rare 1590 old color example of Cristian van Adrichem's map of Israel, Palestine or the Holy Land, depicting the Desert of Pharan or Paran and the Wandering of the Israelites. The map is oriented to the east and covers the Paran from the Desert of Moab to the Mediterranean and from the Dead Sea to Egypt's Nile Delta. This map shows the course of the Israelites as they fled out of Egypt, across the Red Sea, and subsequently spent the next forty years wandering in the Sinai before migrating into the Promised Land by crossing the Jordan River just north of the Dead Sea.

The city of Ramesse is indicated as the starting point of the Biblical Exodus and the wandering of the Hebrews. We can follow their path into the desert and across the Red Sea – where Pharaoh is shown being inundated by the returning waters following Moses' parting of the Red Sea. Now in the Sinai, we can follow the footsteps of the Hebrews to Mount Sinai (Mons Sinai), where Moses is drawn throwing down the tablets of God. At the foot of the mountain, the Children of Israel can be seen dancing around the Golden Calf. Thirty eight stations of the Wandering are noted throughout. Near the bottom center of the map, we can note the Tabernacle with the encampment of the Tribes around it.

Numerous Biblical sites are noted throughout. This map is the eight of ten maps of the Holy Land prepared by Christian van Adrichem for publication in his Theatrum Terrae Sanctae. Adrichem's maps for the Theatrum were prepared between 1580 and 1585, but were published posthumously by his associate, Gerardis Brunius of Koln, in 1590. The publication went through several later editions and served as a basis for most subsequent maps of the Holy Land well into the 18th century.