1942 Colonial Institute of Japan Map of the Philippines 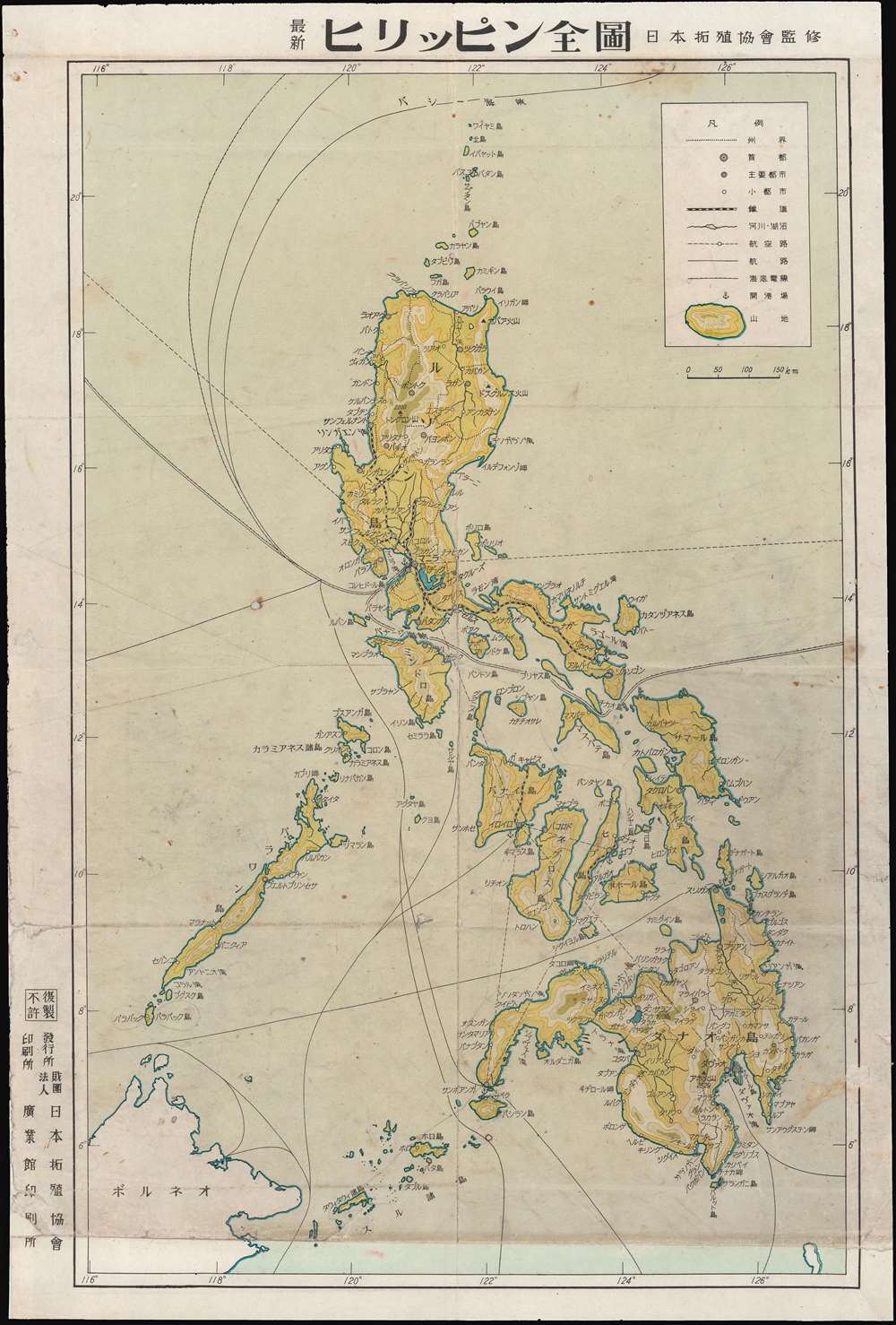 1942 Colonial Institute of Japan Map of the Philippines

A Japanese map of the Philippines, soon after it was captured by Japanese forces in WWII.
$250.00

This is a Colonial Institute of Japan World War II map of the Philippines produced in 1942 (Showa 17), soon after the fall of the islands to the Japanese. It is an artifact of the high tide of Japan's imperial expansion, when its armies seemed invincible.

The map notes administrative divisions, road and rail infrastructure, telegraph lines, shipping and air routes, and topography. It also includes several hand-drawn annotations. The city and island of Balabac (バラバック) are circled towards bottom-left, and sea routes are drawn from Manila to Zamboanga (サンボアンガ) on Mindanao and from Zamboanga around Tawi-Tawi Island (タウィタウィ諸島) and Tapul Island (タプル島) back to Isabela City (イサベラ) on Basilan Island, opposite Zamboanga. The purpose of these annotations is unclear, but it is reasonable to consider that they might have been related to an expedition seeking suitable locations for Japanese settlement.

Japan's Invasion of the Philippines

As Japan slipped towards militarism in the 1920s and 1930s, the Philippines increasingly came to be seen as a potential site for colonial expansion. Japan had, in the early 20th century, acknowledged American control of the Philippines in exchange for American acknowledgement of Japanese interests in Korea. But in the intervening years, thousands of Japanese traders and laborers had settled in the Philippines and U.S.-Japan relations had worsened considerably.

The capture and control of the Philippines was vital to the success of Japanese plans to dominate the Pacific. Not only was the archipelago rich in natural resources, including rubber, oil, mineral resources, and wood, it was also centrally located and well-positioned for expansion into the East Indies. Moreover, wresting control of the Philippines from the United States would effectively undermine the American ability to wage war in the region.

The Japanese invasion of the Philippines commenced in tandem with the bombing of Pearl Harbor. While Japanese forces advanced quickly through the archipelago, like the Spanish before them, they promptly discovered that the hundreds of islands and limited infrastructure made the Philippines almost impossible to fully control. While there may have been some goodwill towards Japan's Greater East Asia Co-Prosperity Sphere in the abstract, the reality of occupation, defined by severe shortages and forced labor, won Japan few friends. The Japanese maintained a tenuous control of most of the Philippine Islands, with an active insurgency in the countryside. In 1944, U.S.-led Allied Forces began an aggressive and bloody campaign to retake the islands, and successfully drove the Japanese out of the Philippines in 1945.

From the late 19th century, government officials in Japan were eager to promote emigration as a means of alleviating Japan's population crisis, which was also a source of potential social and political volatility. Thousands of Japanese emigrated to Hawaii, California, South America, Southeast Asia, and elsewhere, usually with government support and coordination. As Japan's empire grew, sites closer to home became a more viable outlet, particularly Korea and Manchuria, but also the Philippines and other places in Southeast Asia that were strategically significant and/or had a Japanese emigrant population.

This map is from the third book in the series Colonial Monographs (拓殖叢書), published by the Colonial Institute of Japan (日本拓殖協), on the Philippines (比律賓, other books covered French Indochina, Hainan Island, and India). It was printed on July 10, 1942 (Showa 17) and distributed on July 15. The book is held by the National Diet Library, the Library of Congress, and the University of Chicago. It has no known history on the market.


Kōgyōkan (廣業舘; fl. c. 1893 – 1945) was a small-scale publisher in Tokyo that produced a handful of works relating to Japanese overseas communities and colonization efforts in South America, China, and Southeast Asia. Learn More...


Shibayama Takenori (柴山武徳; fl. c. 1941 - 1943) was a Japanese writer affiliated with the Colonial Institute of Japan (日本拓殖協會) who wrote a 1942 book about the Philippines for the institute. Learn More...