1941 Wisner and Minneapolis Morning Tribune Map of the Philippines 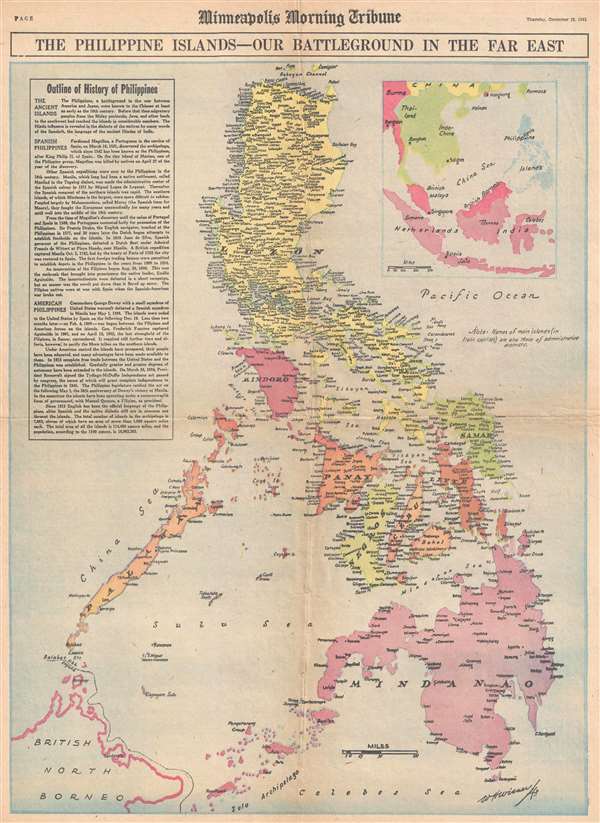 1941 Wisner and Minneapolis Morning Tribune Map of the Philippines

Printed a week after the Japanese invasion of Luzon.

This is a Thursday, December 18, 1941, W. H. Wisner and Minneapolis Morning Tribune map of the Philippines. Printed eight days after the first Japanese landing on Luzon, this map depicts the Philippine Archipelago from Babuyan Channel to the Sulu Archipelago and the Celebes Sea and from Borneo, Palawan, and the China Sea to the Pacific Ocean. Curiously, other than the headline and the first line of the text box along the left border, no other reference is made to the fighting on Luzon between American soldiers and Japanese forces. A highly detailed map, myriad locations throughout the islands are labeled, including Manila. Each of the island is labeled, along with several seas within the archipelago. A text box, entitled 'Outline of History of Philippines' provides readers with a history of the archipelago from the 10th century until 1940. An inset map, situated in the upper right corner, illustrates the Philippines in relation to other countries in the region, such as Indonesia (Dutch India), China, and Taiwan (Formosa).

This map was drawn by W. Harrison and printed by the Minneapolis Morning Tribune on Thursday, December 18, 1941.