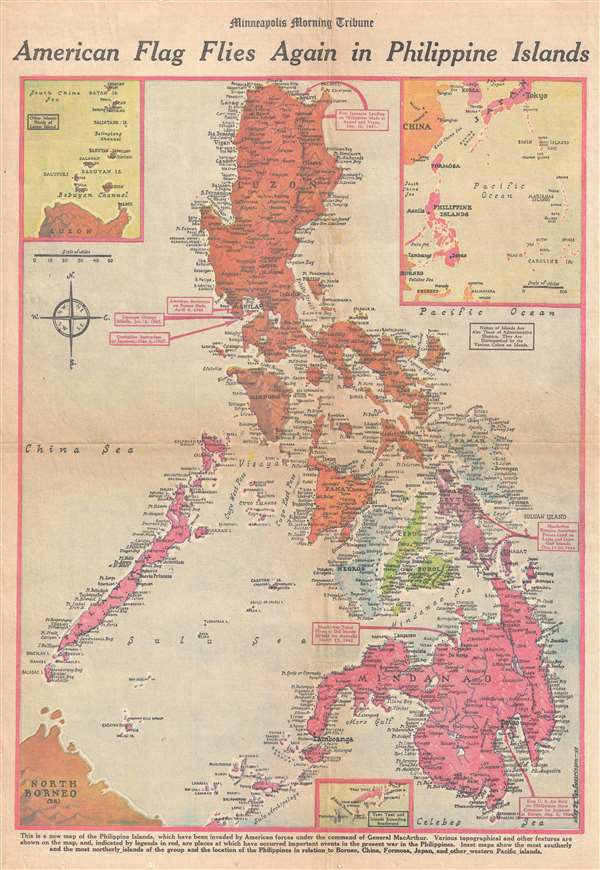 Published a week after American forces landed on Leyte and returned to the Philippines.

This is a Friday, October 27, 1944 Van Swearingen and Minneapolis Morning Tribune map of the Philippines a week after the American landings on Leyte. The map depicts the region from Luzon to Mindanao and Borneo and from Palawan and the China Sea to the Pacific Ocean. Since the end of the Spanish-American War, the Philippines had been an American possession, controlled by the Insular Government and a Governor-General. Following the Japanese attack on Pearl Harbor on December 7, 1941, the Japanese landed troops on Luzon on December 10. Outnumbered and outgunned, American resistance was fierce, but unable to hold off the Japanese assault. Several notations around Luzon trace the Japanese invasion, including the first landing at Aparri and Vigan, the Japanese occupation of Manila on January 2, 1942 and the end of American resistance on the Bataan Peninsula on April 9, 1942 (which led to the infamous Bataan Death March). It also notes the surrender of Corregidor, an island fortress in Manila Bay, on May 6, 1942. General Douglas MacArthur had been in command of American forces in the Philippines and narrowing escaped from Corregidor before flying to Australia from an airfield on Mindanao in March 1942, which is also noted here. MacArthur vowed to return to the Philippines, and his triumphant return is celebrated here, with the landings on Leyte in October 1944.

Highly detailed, myriad locations throughout the Philippines are labeled, including Manila and Del Monte. All of the large islands and most of the smaller ones, such as Leyte, Ceby, Negros, Mindanao, Panay, Mindoro, and Luzon. Three inset maps are included on the map. One situated in the upper left corner illustrates the islands north of Luzon, while one in the upper right corner depicts the Philippines in relation to other countries in the region, including Indonesia, Taiwan (Formosa), China, and Japan. A small inset map, along the bottom border, illustrates Tawi Tawi and the islands extending south from there in the Sulu Archipelago.

This map was drawn by Van Swearingen and published in the Minneapolis Morning Tribune on Friday, October 27, 1944.

Good. Newsprint. Light soiling. Closed tears professionally repaired on verso. Text on verso.
Looking for a high-resolution scan of this?