1851 Vuillemin Map of the World on Mercator's Projection 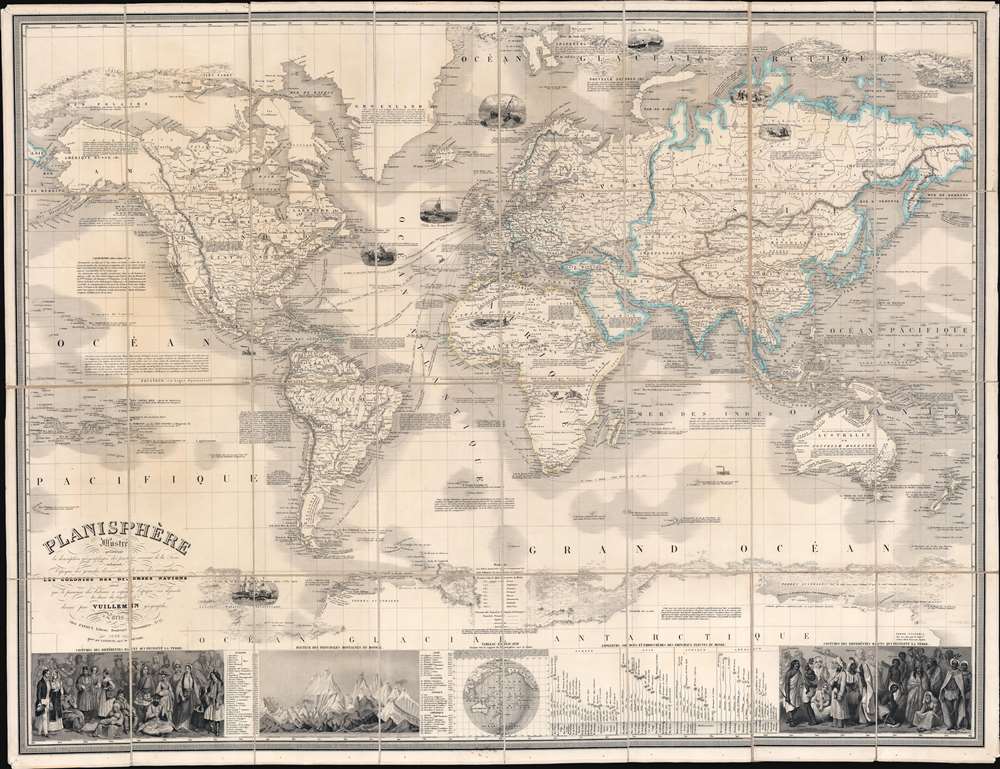 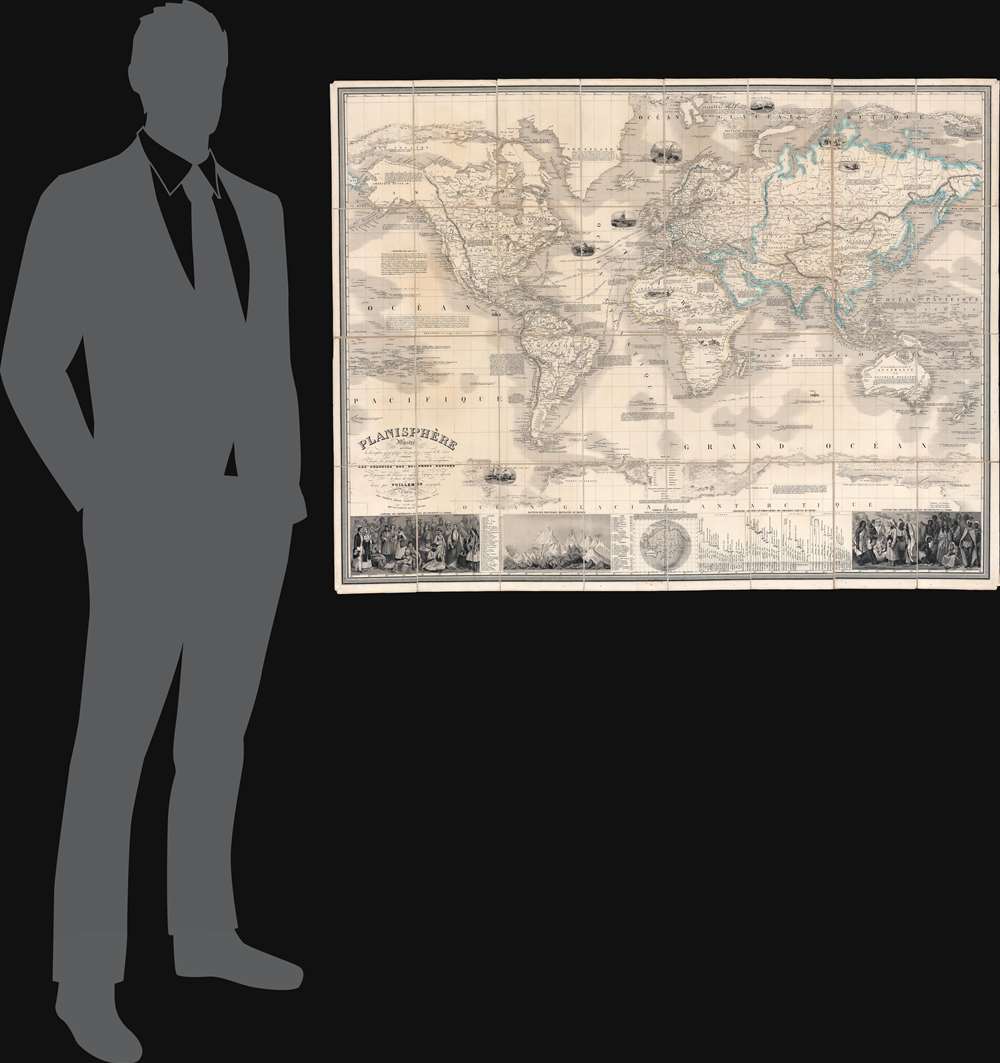 1851 Vuillemin Map of the World on Mercator's Projection

Striking map capturing the sprit of the mid-19th century.

A striking 1850 Alexandre Vuillemin map of the world, here in its first edition, capturing the social, economic, and scientific ethos of the mid-19th century. Centered on the Bight of Benin, Vuillemin's dissected folding map covers the entire world on a Mercator Projection. The map's magnificent size allows for stupendous detail throughout and accommodates copious annotations, some of which are fascinating. Nine large vignettes illustrate dramatic scenes ranging from whaling in the Arctic and Antarctic, to jousting at ostriches in Africa. Major maritime routes are illustrated, with distances. Also, in the Arctic and Antarctic, ice flows are illustrated pictorially to high dramatic effect. Some annotations of exceptional interest including a note on the California Gold Rush (still of great interest in 1850), the cod fisheries on the Grand Banks, and the discovery of Lyakhov's ivory islands (New Siberia). In the lower quadrants statistical charts illustrate comparative mountain heights and river lengths. To either side, ethnographic charts illustrate the traditional dress of diverse peoples.

Far to the north, in the high Arctic, north of Russia, there is a partial land mass with a note referencing Ivan Lyakhov. This land refers to the Lyakhov Islands, discovered in the 1770s by Russian Fur trader Ivan Lyakhov. These islands, part of New Siberia, were said to have such an abundance of fossilized mammoth ivory that many of the smaller islands were formed from it in their entirety. Lyakhov himself brought back 10,000 tons of Ivory on his first trip and subsequent traders are said to have brought back as much as 100,000 tons in the following 20 years. For nearly 100 years, New Siberia was the source for most of the world's fossil Ivory. The islands were formed at the end of the last Ice Age, when hundreds of thousands of mammoths were stranded by the melting glaciers and starved to death en masse.

In the Pacific off the coast of California, a large annotation describes the 'riches mines d'or' discovered and provides instructions on how to get there. The discovery of Gold at John Sutter's mill by James Wilson Marshall (1810 - 1885) in January of 1848 was one of the most definitive moments in American history. Coming at the end of the Mexican-American War (1846 - 1848), the timing of the discovery could not have been more propitious. The combination of new seemly unlimited territory and the lure of gold led to a stampede of adventurers, prospectors, merchants, and homesteaders ready to take their chance with a new life on the frontier. The Gold Rush was not limited to Americans crossing the Great Plains. European, Australian, and even Chinese immigrants rushed into California hungry for their part of the great strike. This Great Migration of peoples transformed the United States in the span of just a few years from a former colony into an expansive transcontinental nation on the cusp of becoming a world power

This map was drawn by Alexandre Vuillemin and published by Charles Fatout. It was engraved by Langevin, who promotes himself as the successor of 'Bénard'. This may be Robert Bénard (1734 - c. 1785) or one of his descendants, but this is unclear. This is the first edition, but we note multiple subsequent editions issued well into the 1860s.


Charles Fatout (18?? - 1882) was a French engraver, bookseller, second-hand bookseller, map seller, print seller, bookbinder, and stationer active in Paris during the second half of the 19th century. From about 1840 he was based at Boulevard Poissonnière 17, an office he may have shared with other engravers and publishers of the period. In addition to his private work, he was also employed as a senior clerk under Damascène Morgand (1840 - 1898) in the second-hand book department of the Auguste Fontaine firm, Passage de Panoramas. In 1875, Morgand separated from Fontaine, and taking Fatout along, took over the bookshop of M. E. Caen, founding, 'Librairie Morgand et Fatout' at 55 Passage des Panoramas. Fatout is described in period literature as 'cold and calculating' leading to the success of his firm. Following Fatout's death in 1882, 'Morgand et Fatout' was formally dissolved, but the firm continued under 'Morgand' until 1897. At this time, himself ready to retire, Morgand sold the business at auction to Abbé Bossout, H. Destailleur, and Émile Müller. Learn More...