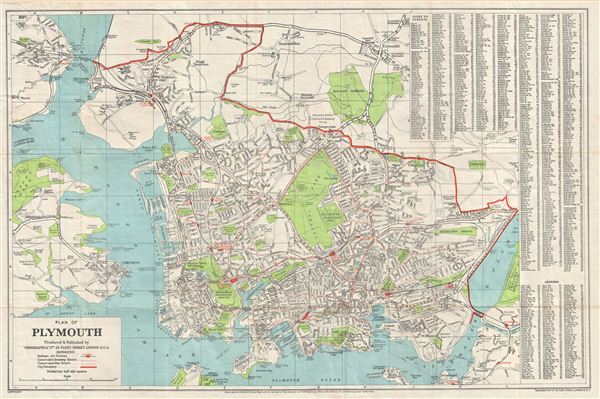 An uncommon c. 1930 map of Plymouth, england, by Geographia Ltd. The map covers Plymouth from the Hamoaze and Plymouth Sound to the River Plym and Crown Hill. The map identifies all streets, parks, cemeteries, ferries, docks, rail lines, and important buildings. Cartographically this map has been derived from the Ordnance Survey from which it has been reduced to a more manageable size. This map predates the post-World War I redesign of Plymouth by Sir Patrick Abercrombie in 1943. Issued by Geographia Ltd. From its offices at 55 Fleet Street, London.

Very good. Backed with linen. Minor wear on original fold lines.
Looking for a high-resolution scan of this?