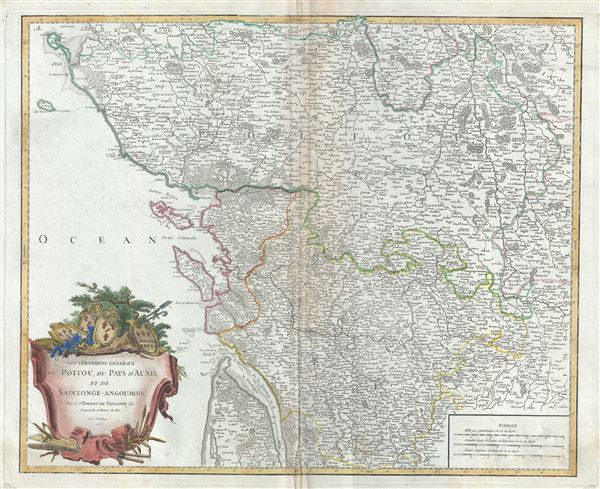 This is an attractive 1753 map of the Poitou-Charentes region of France by Robert de Vaugondy. It covers the region of Poitou-Charentes and part of the Pays-de-la-Loire region from Machecoul south to Royan and inland as far as Rancon, and includes the modern day departments of Vendee, Charente, Charente-Maritime, Deux-Sevres and Vienne. Includes the Ile d'Oleron, the Ile de Re and Ile d'Yeu. The map rendered the entire region in extraordinary detail showing roads, canals, rivers, cities, villages, chateaux, etc. Undersea shoals and reefs are also noted along the coast.

This region, which hugs the Loire Valley, is famed for is beautiful Chateaux and for producing some of the world's finest wines. Vendee is home to a number of small vineyards around the communes of Vix, Brem, Pissotte and Mareuil-sur-Lay. These wines are marketed under the 'Fiefs Vendeens' designation. Production quality has improved markedly over recent years, and, having already achieved the classification Vin Delimite de Qualite Superieure (VDQS), the wines are on their way towards A.O.C status (Appellation d'Origine Controlee). The rural area of Deux-Sevres produces fine wines such as Vin du Thouarsais, of Thouarsas. The cheese Chabichou is also made here. Chabichou is a traditional soft, unpasteurized, natural-rind goat cheese (or Chevre) with a firm and creamy texture.

The department of Charente is known for its fine Cognacs and Pineau wines, agriculture, and cheese. It produces a wide variety of goat cheeses, such as Chabichou, Mothais, Buche du Poitou, and Chabi. In fact, it produces a third of all the goat cheese in France. Charente Maritime is a coastal province bordering Charente, Dordogne, and Gironde (Bordeaux) is also known as the producer of the world's finest Cognacs. Vienne is renowned for its production of Chevre, or goat cheese, and is a vital industry in this department.

A beautifully engraved title cartouche adorns the bottom left quadrant of the map. Drawn by Robert de Vaugondy in 1753 and published in the 1757 issue of his Atlas Universal. The Atlas Universal was one of the first atlases based upon actual surveys. Therefore, this map is highly accurate (for the period) and has most contemporary town names correct, though historic names are, in many cases, incorrect or omitted.

Rumsey 3353.035. Pedley, Mary Sponberg Belle et Utile: The Work of the Robert de Vaugondy Family of Mapmakers, 133.
Looking for a high-resolution scan of this?