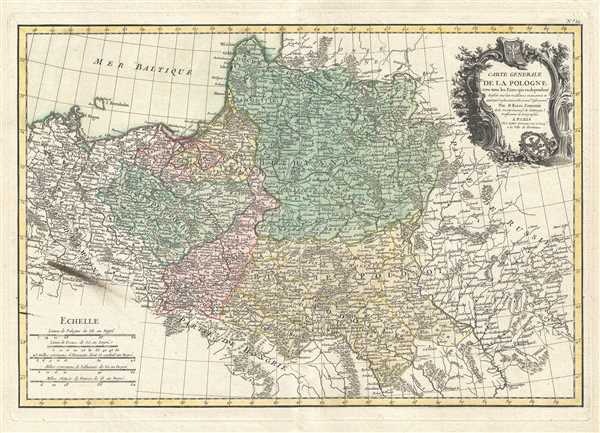 Depicts Poland before the First Partition.

This is a 1762 Giovanni Antonio Bartolomeo Rizzi-Zannoni map of Poland and Lithuania. The map depicts from Denmark and Germany to Russia and from Livonia to Hungary, including Lithuania, Prussia, Greater Poland, Lesser Poland, and parts of Russia, Germany, Hungary and Bohemia. Myriad towns and villages are labeled, along with rivers. Trees and hills are depicted in profile. A baroque style decorative title cartouche depicting the Polish eagle crest appears in the upper right corner.

This map illustrates Poland in the declining years of the Polish-Lithuanian Commonwealth, prior to the 1772 First Partition of the Commonwealth. In 1764, two years after this map was made, Stanislaw August Poniatowski was elevated by election to become King of Poland. This worldly and refined ruler attempted various reforms intended to preserve the failing Polish state, but found himself increasingly subservient to Tsarina Catherina II of Russia. The Bar Confederation of 1768, a rebellion against increasing Russian influence over Polish politics, led to the First Partition of the Commonwealth, a permanent annexation of Polish territory by its more powerful neighbors. Subsequent partitions in 1793 and 1795, would eventually lead to the disintegration of the Polish state, though it was later reconstituted during the Napoleonic Wars.

This map was drawn by Giovanni Antonio Bartolomeo Rizzi-Zannoni and included in Jean Lattre's Atlas Moderne.