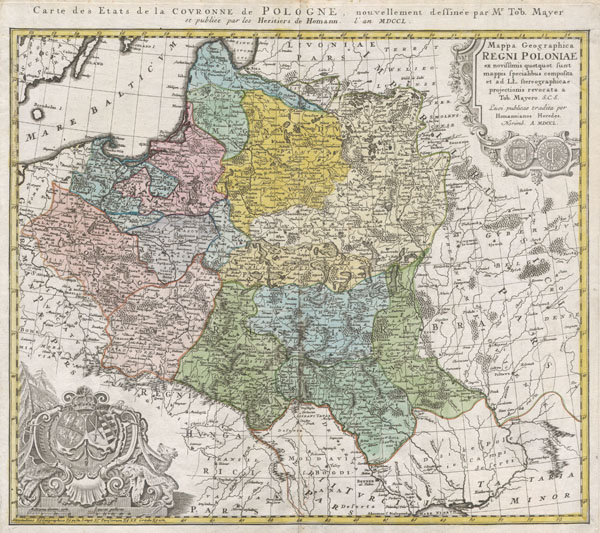 This is one of the Homann Heirs finest and most appealing maps of Poland. Depicts the Poland extending north as far as Latvia, Lithuania, and the Lithuanian Sea and south as far as the Carpathian Mountains, Moldova, and Transylvania. Features two elaborate decorative cartouches, one in the upper right quadrant decorated with a Polish coin, and another in the lower left quadrant bearing the Polish armorial emblems. Additional French title outside top border: Carte des Etats de la Couronne de Pologne, nouvellement dessinee par Mr. Tob. Mayer. This map was drawn by Tob. Mayer for inclusion the 1752 Homann Heirs Maior Atlas Scholasticus ex Triginta Sex Generalibus et Specialibus…. Most early Homann atlases were 'made to order' or compiled of individual maps at the request of the buyer. However, this rare atlas, composed of 37 maps and charts, was issued as a 'suggested collection' of essential Homann Heirs maps. A fine copy of an important map.