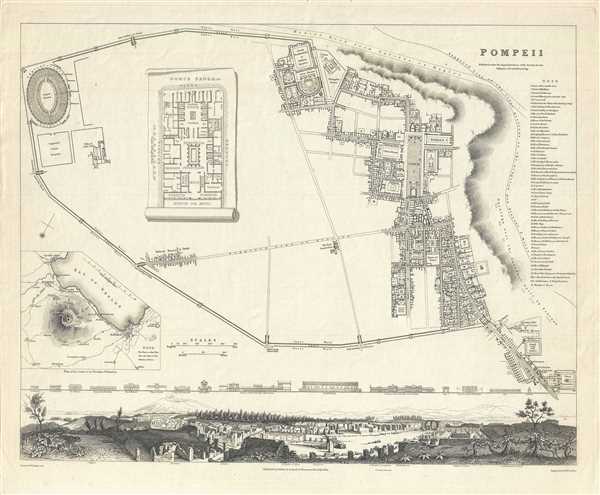 A beautiful example of the 1832 first edition S.D.U.K. map of Pompeii, Italy. Pompeii was destroyed by the eruption of the volcano Vesuvius, in A.D. 79 and remained buried under ash until its rediscovery in 1748. Though excavations had been in process for nearly 60 years when this map was printed, very little of this ancient Roman city had been unearthed. The excavated portions of Pompeii, confined to the right hand quadrants of the map, drew the attention of the world as more and more of the fantastically preserved pleasure city was unearthed. For Englishmen and women visiting Italy as part of the 'Grand Tour,' Pompeii was a must see. T he discoveries here, reported by travelers, may have been partially responsible for the classical revival of the mid 19th century. The map shows the walled city of Pompeii with numerous important buildings labeled including the Amphitheater, the Villa of Julia Felix, the Forum, the Grand Theater, the Temple of Hercules, the Basilica, and the Grand Court, to name but a few. An inset map in the lower left hand quadrant shows Vesuvius and vicinity. Another inset set in the 'unexcavated' portions of Pompeii, shows the layout of a typical Pompeii villa. A decorative view along the bottom of the map shows the city, as it must have appeared to 19th century travelers. Above this view are artistic renderings of important Pompeii Buildings.

This map is part of A Series of Maps, Modern and Ancient, issued by subscription. Each folder in the series would contain a set of two maps bound together. The map accompanying this folder, not included here, was of Athens. Original folder includes the names of committee members of the ‘Society’, list of maps previously published, the folder number, which is this case is XXIX, its contents and the printer and publication details. This map was engraved by T.E. Nicholson and issued by the Society for the Diffusion of Useful Knowledge’s subscriber’s edition folder. The folder at the time was priced at 1 shilling plain or 1 shilling 6 pence colored. Published by Baldwin and Cradock.