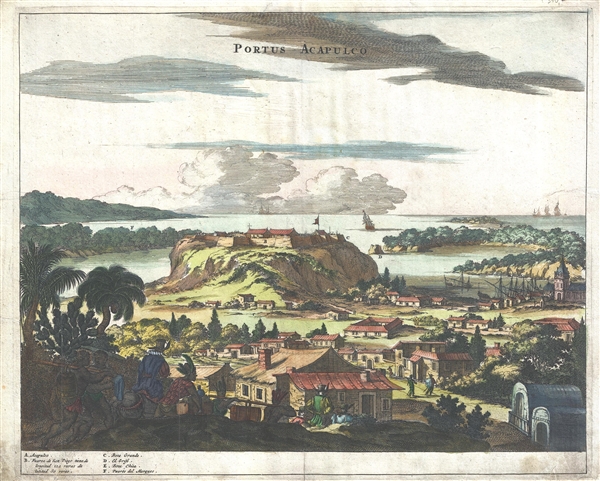 A rare 1671 view of the port of Acapulco, Mexico, by Englishman John Ogilby. This impressive view embraces the heart of colonial Acapulco, showing the Fort of San Diego and the surrounding port community. In the foreground mounted Spaniards lead indigenous Mexicans bearing goods to ships for loading. When this map was issued Acapulco, although still relatively small population size, was one of the most important ports in the world. All routes westward across the Pacific from America started in Acapulco. Through this port, the Manila Galleon trade transported most of the wealth mined in the New World to the eager markets of Asia. Because of the difficulty of sailing around Cape Horn, and the lack a Northwest Passage, the Manila Galleon trade out of Acapulco earned the Pacific the moniker, the 'Spanish Pond.' It was not unitl Anson captured the Nuestra Señora de Covadonga in 1743, not far from Acapulco, that the Spanish monopoly on the Pacific trade was broken.

In modern terms the view looks down on Acapulco from hills to the northeast. Acapulco Bay appears to the right, and to the left, Puerto Marques Bay. The high ground in between the two forts is the modern day resort area known as Las Brisas. To the far left a second promontory is apparent. This area, Cabo Marques and Puna Diamante, is the site of spacious villas and summer homes of the Mexican elite.

This view was published in the 1671 edition of John Ogilby's America, one of the most influential books of the 17th century.