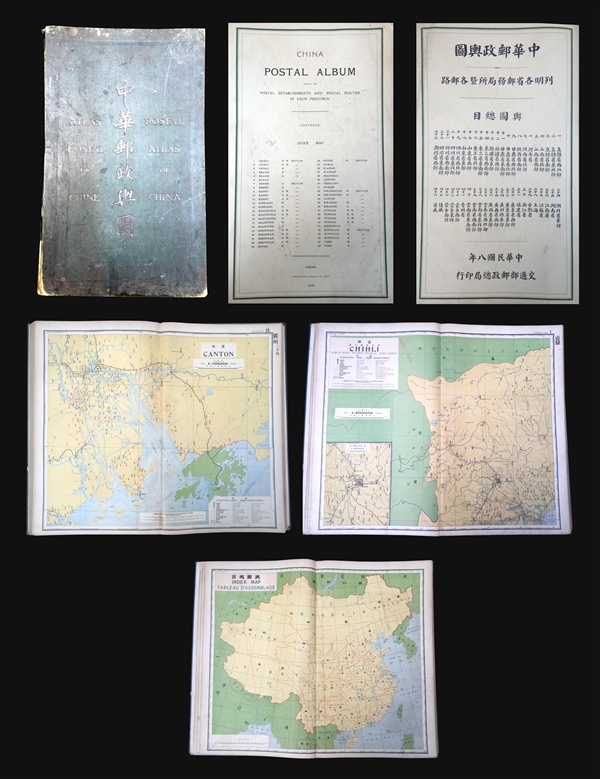 A scarce example of the 1919 second edition of the official Chinese Postal Atlas. Compiled by Charles Jacot-Guillarmod, this atlas contains 47 maps, including an index, covering all of Chinese in considerable detail. Most of the maps are presented on a standard projected sale of 1: 900000, but some of the maps are on a larger scale. Most were derived from regional working postal maps.

The history of the Chinese Postal Atlas is closely related to attempts to Romanize the Chinese Postal System. The first atlas followed the 1906 Shanghai Imperial Postal Joint-Session Conference to develop a system of Romanization following Herbert Giles' 'Nanking Syllabary'. The Giles 'Nanking syllabary' was popular with the French dominated Chinese Postal Service which considered the earlier Beijing based system developed by Thomas Francis Wade as too Anglophone. The second edition of the post atlas (the present example) was issued in 1919 following a Ministry of Education system to standardize the Beijing dialect in all elementary schools throughout China. This led to a resurgence of the Wade system, as seen in the present atlas. Nonetheless, in 1931 the French postal co-directory Henri Picard-Destelain ordered a return to the Nanking Syllabary. The Chinese Postal System remained under French management until 1943 when the Japanese invaders ousted A. M. Chapelain, the last French head of the China Post.

There are four known editions of this atlas: 1907-08 (Shanghai, replacing the 1903 postal wall map, 21 maps plus index map), 1919 (Beijing, present example, 47 maps), 1933 (Nanjing), and 1936 (Nanjing). The atlas was compiled by the French topographical engineer Charles Jacot-Guillarmod. It was printed in Beijing by the Government Bureau of Engraving and Printing.