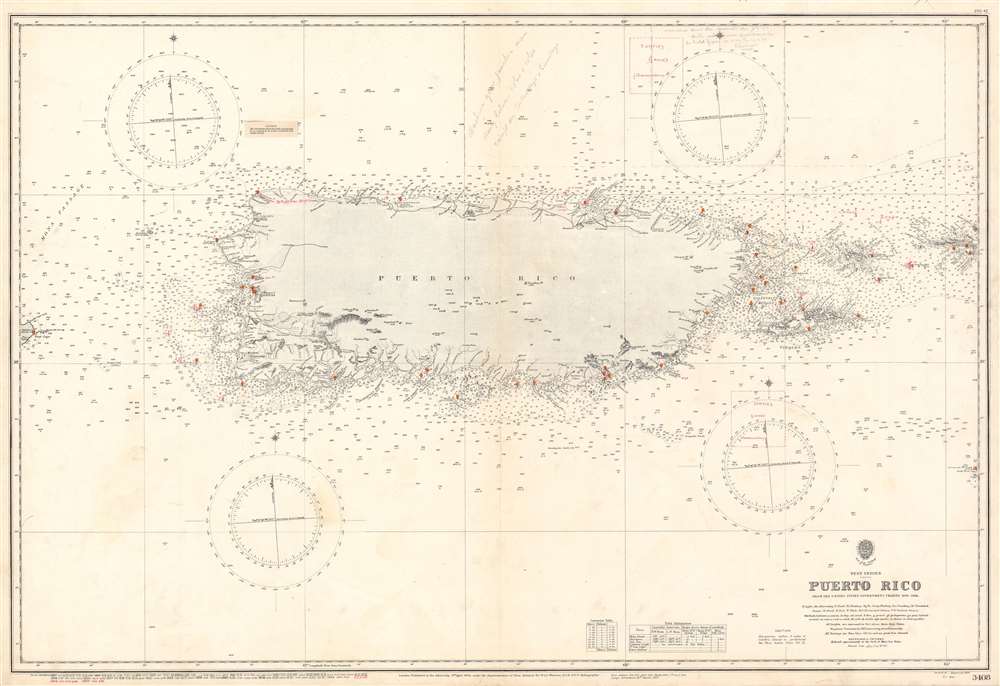 The manuscript annotations are by far the most compelling aspect of this chart. Two boxes drawn in red ink, one above Puerto Rico and one below, read 'Dumping Ground (Ammunition)'. After World War II, the U.S., the U.K., and Russia elected to dump unused munitions and chemical weapons into the ocean and some of these events were not well documented. A 2009 report from the U.S. Department of Defense recognized two dumping grounds near Puerto Rico, which may be the two marked on this map. Today, hundreds of thousands of unexploded ordnance sit on the ocean floor and have washed up on shore or injured fishermen that come into contact with them in nets.

Two manuscript notations in pencil along the top border describe military exercises in the area. One notes a machine gun practice area that would happen daily between 0800 and 1600 (8 A.M. to 4 P.M.) except on Saturday and Sunday. The second, written in both French and English, notes that anti-submarine operations would be held in the area between August 10 and August 18, 1950.

A highly detailed chart, myriad depth soundings are present along the coast of Puerto Rico and in the Virgin Passage and the Mona Passage. A paste-down above Puerto Rico notes that the 100-fathom line in farther to the north than charted on the map. Other manuscript notations mark coastal lights and other locations. Points, bays, and other coastal features are noted.

This chart was originally engraved in 1904 and republished by the Admiralty in 1927. Numerous subsequent additions and corrections have been made, up through the manuscript additions in 1950.