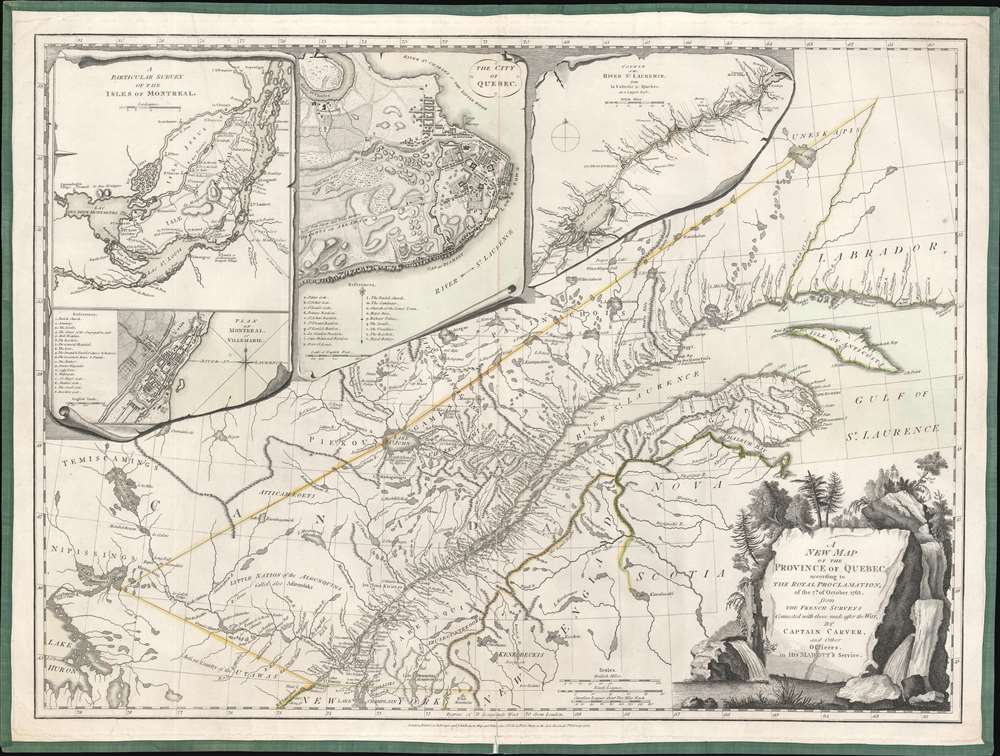 This is the first state of the 1776 Sayer and Bennett Map of the newly-acquired Province of Quebec, with detail maps of the course of the St. Lawrence River, the Island of Montreal, and inset city plans of Montreal and Quebec City. The region passed from France to Great Britain following the signing of the Treaty of Paris in 1763 at the close of the French and Indian War (1754 - 1763). The map shows settlements, military outposts, major roads, and areas of Native American habitation with their tribal names noted. The two city plans include numbered and lettered keys indicating important structures and fortifications.

Following the Treaty of Paris, the British surveyed the territory they now occupied in North America, formerly New France. The region falling within the bounds of this map was surveyed by Captain Jonathan Carver. As alluded to in the title, the map is based on unnamed French sources. Nonetheless, Carver was already familiar with the territory from his war service - he served with James Wolfe in the 1759 taking of Quebec.

Bounds of the Survey

The borders of the Province are marked both with an engraved dotted line, and with the application of yellow outline color. The straight lines and sharp angles of the border north of the Saint Lawrence River are easily discerned. Less obvious is the borderline considerably south of that river, hugging the mouth of Chaleur Bay and following a line of mountains running, with few breaks, to the White Mountains (here shown within the New York) and skirting the northern end of Lake Champlain. The map thus suggests that, according to the Treaty of 1763, both shores of the Saint Lawrence River and its watershed fall within the bounds of Quebec.

The map is not only rich in detail, but it is also beautifully and entertainingly engraved. The title cartouche is framed with a rocky, forested waterfall scene, the title is engraved so that it appears chiseled into a rock face. Each of the four inset maps are presented in a trompe l’oeil resembling separate sheets spread across the surface of the actual map.

This map was engraved in 1776 for inclusion in Thomas Jefferys' American Atlas. Following Jefferys' death in 1771, production of the atlas was taken over by Sayer and Bennett. Further issues of the map would be printed in 1788 and 1794. The map and the atlas are both well represented in institutional collections.


Jonathan Carver (April 13, 1710 - January 31, 1780) was am American explorer, cartographer, and writer active during the colonial period. He was born in Weymouth, Massachusetts and, During the French and Indian War (1754 - 1763), saw action with the Massachusetts Militia. During the war he was able to learn mathematics and military surveying. He was elevated to the rank of captain and given charge of a regiment in 1761. When the war ended Carver determined to explore the new British territories ceded by the Treaty of Paris. In 1766 he was hired by the frontiersman and Royal Governor Robert Rogers to lead an expedition in search of an interior water route to the Pacific. He explored parts upper Mississippi basin in the vicinity of modern day Wisconsin, Minnesota, and Iowa. In 1769, after the expedition which ended in significant new cartography and Carver believing he may have found a water route to the Pacific. In the meantime, Rogers, his patron, was arrested and court-martialed for treason. Carver was caught in the fallout from Rogers' court martial and his discoveries were never formally recognized. Seeking redress from the crown, Carver traveled to England where his requests where heard. He never received a reward for discovering the Northwest Passage, but he was awarded two separate grants in North America. Carver's cartographic information passed into the hands of Robert Sayer who incorporated some if it his maps. While in England Carver also completed his memoires. Published in 1778, the book, Travels through the Interior Parts of North America, in the Years 1766, 1767 and 1768 was an instant success. He died one year later in 1780. In 1804, several of carver's descendants portioned the U.S. Congress for ownership of a large supposed grant in Wisconsin and Minnesota – apparently given to him by the Sioux while he was exploring the region. The U.S. Congress ultimately denied the claims and the (probably) fraudulent grants were formally voided. Learn More...

Sayer, R., Bennett, J., and Jefferys, T. The American Atlas: Or, A Geographical Description Of The Whole Continent Of America ... Engraved On Forty-Eight Copper Plates, By The Late Mr. Thomas Jefferys, Geographer to the King, and Others. (London), 1776.