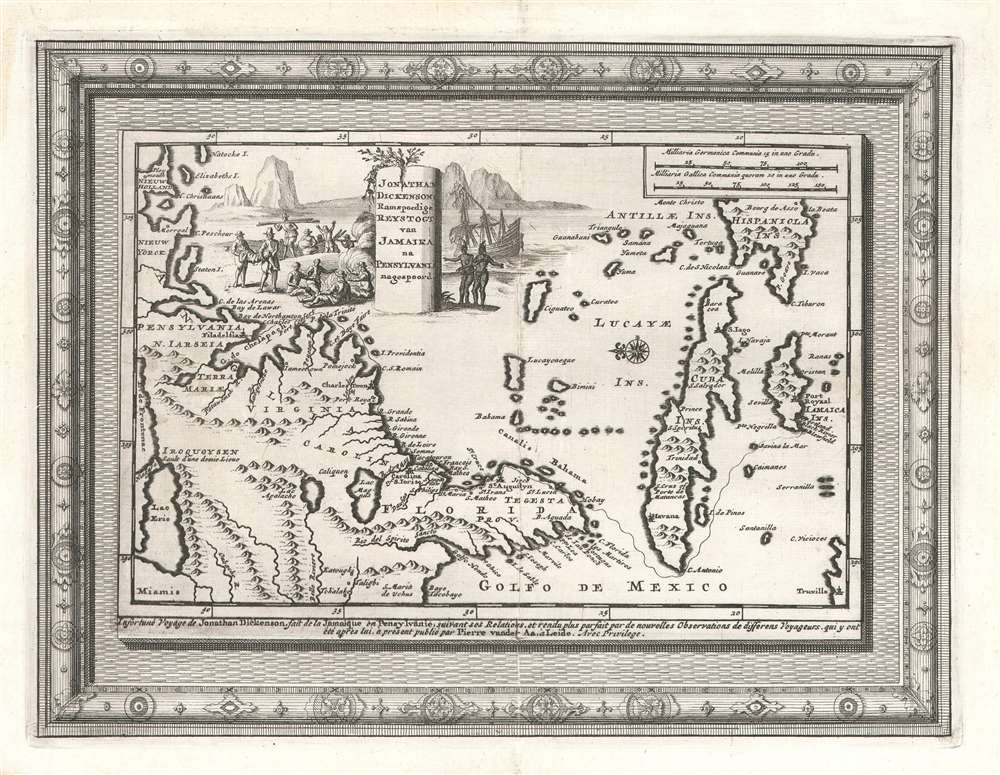 An exceptionally unusual and very rare separate-issue deluxe edition 1707 map of the east coast of America prepared by the Dutch cartographer Pieter van der Aa featuring unique elaborate border work. The map was prepared to illustrate the Dutch edition of journals describing the voyage, shipwreck, capture by Indians, and subsequent travels of Quaker merchant Jonathan Dickinson (1663 - 1722) and his family. Oriented to the east, Dickinson's map covers the eastern part of North America from roughly Lake Erie and New York south to Jamaica, including Virginia, Florida, the Carolinas, and Cuba. A dotted line indicates the path of Dickinson's travels from Port Royal, Jamaica, to Philadelphia, Pennsylvania.

In 1696, following a series of earthquakes that nearly destroyed Port Royal, Jamaica, Dickinson determined to pack up his family and settle with relatives in Philadelphia. He left Port Royal on board the barkentine Reformation on August 23rd of 1696. The Reformation's voyage proved ill-fated with crew injuries and other mishaps occurring from the outset. Eventually the ship was separated from its escort and, blown off course by a hurricane, shipwrecked on what is today Jupiter Inlet, Florida, not far from modern-day Palm Beach. There they were taken captive by local Jaega Indians from the village of Jobe or, as Dickinson spells it, 'Hobay'. This began a long saga of torture and abuse, in which the captives were stripped of all their possessions, beaten, feed starvation rations, and constantly mocked. Many died. Nonetheless, their pacifist Quaker values and reserve served them well, and their refusal to fight the local tribesmen most likely saved their lives. The survivors slowly made their way northwards, pretending, usually unsuccessfully on account of their light hair, that they were Spanish, a nation with which the local tribes maintained a tentative peace. Eventually reaching St. Augustine they were well-treated by the Spanish governor, who sent them to Charleston (South Carolina) from which they were able to catch a ship to Philadelphia. There Dickinson prospered and twice served as Mayor of Philadelphia, in 1712-1713 and 1717-1719.

This map also has some additional cartographic features of considerable interest. There are two lakes of note in the upper left quadrant, one labeled 'Lac Magnus, (more commonly known as 'Lacus acuqe dulcis', as identified on many other maps), and a second identified as 'Apalatcy'. Both of these lakes make their first appearance on the De Bry / Le Moyne map of 1591. The largest of these is represented as the source of the River May. In that chart Le Moyne correctly mapped the River May (St. John’s River, Florida) in an inverted 'V' form, first heading north, then south to meet with a large inland lake (in all likely hood Lake George or one of the other great inland lakes of Florida). Hondius on the other hand maps the course of the May heading to the northwest, thus relocating the 'Lacus Aquae Dulcis' far to the north. This error can be understood in terms of magnetic variation, temperature issues associated with isothermal lines, and navigational errors related to the confusion of the star Asfick with Polaris. While Le Moyne correctly located the mouth of the River May at 30 degrees of latitude, Hondius maps it between 31 and 32 degrees. This led to a misassociation of the River May with the Savannah River. Thus, while the real River May dips southward, the Savannah River heads almost directly NW into the Appellation Mountains, forming the modern southern border of South Carolina. Hondius, no doubt taking his cue from navigators who rarely trekked inland, therefore rerouted the May River to flow from the northwest. Without an accurate picture of the interior, Hondius followed Le Moyne’s example and translocated the great freshwater lake to the north. Others have speculated that the Le Moyne’s River May is in fact the St. John’s River and that the 'Lacus Aquae Dulcis' is in fact the Okefenokee Swamp - however, this argument runs counter most scholarship. The influence of the Mercator-Hondius firm was so pronounced in Europe that most subsequent cartographers, including as we see here Van der Aa, followed their lead.

Lake Apalatcy, further north, also bears some discussion. Both the De Bry / Le Moyne and the Honduis / Mercator maps of this region depict this lake originating from a great waterfall plunging from between a cleft in the mountains. Some have speculated that this may have derived from early indigenous reports of Niagara Falls, but this seems doubtful. Be that as it may, Van der Aa is here one of the first to depict this lake without the hallmark waterfall. Most subsequent cartographers abandoned the lake altogether.

The 1706 English edition of Dickinson's narrative did not contain a map. It was not until the 1707 Dutch edition that a map, compiled by Pieter van der Aa, was added. The present map, is exceptionally noteworthy as it features deluxe border work not seen other examples. The elaborate frame-like border, printed from a separate plate, is a Van der Aa trademark, and indicates special limited 'deluxe' editions of his work. Similar borders were incorporated into map for the rare 'deluxe' editions of Van der Aa's atlas, Galerie Agreable du Monde, of which only 100 examples were issued. This map is not known to have been included in the atlas and its formatting does not suggest it was included in the 1707 edition of Dickinson, so it is most likely a separate issue. All examples of the Dickinson map are on the market, but the present deluxe-border edition is known in only 2 examples, of which this is the better.