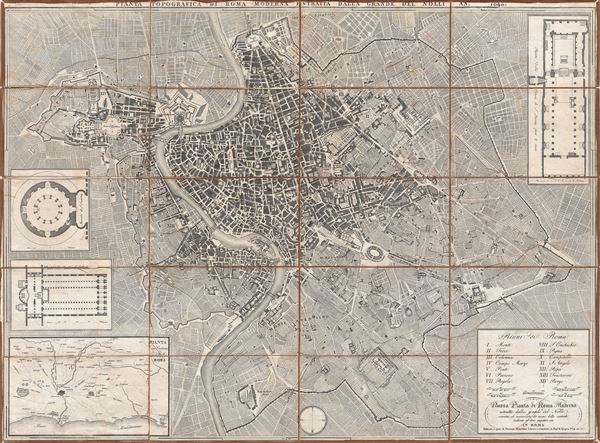 A fine and rare 1843 case format map of Rome, Italy by Venanzio Monaldini. This extraordinary map of Rome heavily references, with various updates and revisions, the seminal 1734 map of Rome by Giovanni Battista Nolli. Nolli's map was the first modern map of Rome and basis of almost all subsequent maps of Rome until approximately 1870, when Rome became the capitol of Italy and more modern plans were issued. Depicts the city in extraordinary detail labeling all streets, ferry crossings, bridges, parks, and historic buildings. Surrounded by plans of important buildings including the Mausoleum of Saint Constance, the Basilica of St. Paul, a layout of the Pantheon, and the floor of the Church of Saint Lorenzo. In the lower left quadrant there is a map of the vicinity of Rome. In the lower right quadrant there is a text box with a list of the 14 neighborhoods of Rome, along with the map's title and publication information. This map was designed with the traveler in mind and thus bisected and backed with linen for easy folding. Comes with original slipcase. Most likely engraved by Pietro Ruga, a prominent Rome based engraver best known for his architectural plans and views. Published from Venanzio Monaldini's bookshop on 79 Piaza di Spagna, Rome, Italy.

Venanzio Monaldini (fl. c. 1765 - 1849) was a late 18th and early 19th century bookseller, book publisher, and map publisher based in Rome, Italy. His work appears as early as the 1760s and as late as 1849. It is unfortunately unclear if his opus represents a single individual or an an ongoing family enterprise. Monaldini's publications focused on maps and guides intended for the Grand Tour set, many of which he published in English. Monaldini, along with Arthur John Strutt, also published the weekly Roman Advertiser: Journal of Science, Literature and the Fine Arts from October 24, 1846 to April 21,1849. The bookshop, Venanzio Monaldini Librario e Cartolaro, was located on Piazza de Spanga no. 79, just opposite the Spanish Steps, Rome, Italy. Learn More...