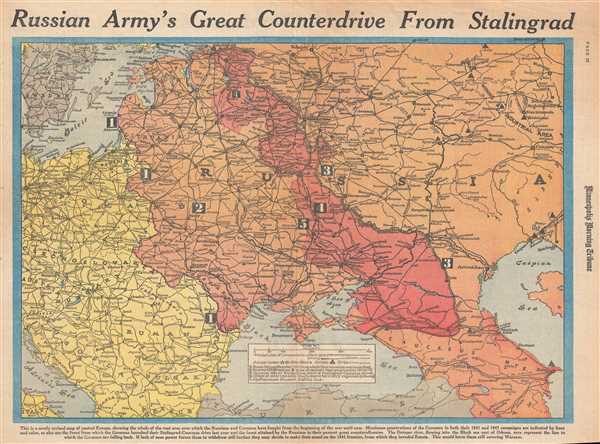 Provides an incredible visual summary of combat on the Eastern Front through the beginning of May 1943.

This is a Wednesday, March 3, 1943 William H. Wisner and Minneapolis Morning Tribune map of the Eastern Front during World War II. The map depicts the region from Copenhagen, Berlin, Prague, and the Adriatic Sea to the Ural Mining and Industrial Area, the Caspian Sea, and the Caucasus Mountains. Illustrating the Eastern Front from the beginning of the war until the date on which this map was created, it provides a visual summary of combat between the Russians and the Germans. Five different lines are illustrated and labeled numerically on the map, presenting five different moments in the history of the war. Line 1 represents the border agreed to in the Molotov-Ribbentrop Pact, also known as the Nazi-Soviet Non-Aggression Pact, which split Poland in half. When Nazi Germany launched Operation Barbarossa and invaded Russia in 1941, they began here. Line 2 represents the border between Poland and Russia in 1939 before the beginning of World War II. Line 3 represents the deepest Nazi forces penetrated into Russian territory, with line 4 representing the line held by the Germans during the winter of 1941-1942. Line 5, the edge of the solid red area, approximately represents the current battle line as of March 3, 1943. The solid red area represents the territory that has been regained by Russia since the beginning of their counteroffensive.

This map brilliantly presents all of the important information as far as the nuts and bolts of combat on the Eastern Front is concerned, particularly in regards to where all of the major cities are located and how, on a continental scale, the fronts have shifted in general terms. However, this map does not fully disclose the back-and-forth nature of the Eastern Front, or its brutality. Several major cities, including Leningrad and Stalingrad, were besieged by the Germans for incredible amounts of time. Leningrad was under siege for over two years, while the Battle of Stalingrad lasted for five months but has the grim distinction of being the bloodiest battle in human history.

This map was drawn by William H. Wisner and published by the Minneapolis Morning Tribune on Wednesday, March 3, 1943.

William H. Wisner (1894 - December 11, 1963) was the manager of the editorial art department of The Chicago Tribune. Born in Brooklyn, Wisner attended Columbia University and the College of the City of New York. He then attended the Julian academy in Paris where he received his formal art training. He began working for the Tribune in 1913, but left the newspaper during World War I to serve as an attache to the inter-allied mission for propaganda. He rejoined the Tribune in 1919 as head of its editorial art department. Wisner held several posts over the course of his career with the Tribune, including several influential and revolutionary positions concerning the integration of photography into the newspaper. His greatest work, though, was 'when he devoted himself entirely to the complicated task of preparing full-color map which provided Tribune readers with up-to-the-minute developments on the global battlefronts.' In 1948, Wisner resumed full management of the editorial art department and held that position until his retirement in January 1963. Learn More...

Very good. Newsprint. Closed minor margin tears professionally repaired on verso. Text and date on verso.
Looking for a high-resolution scan of this?