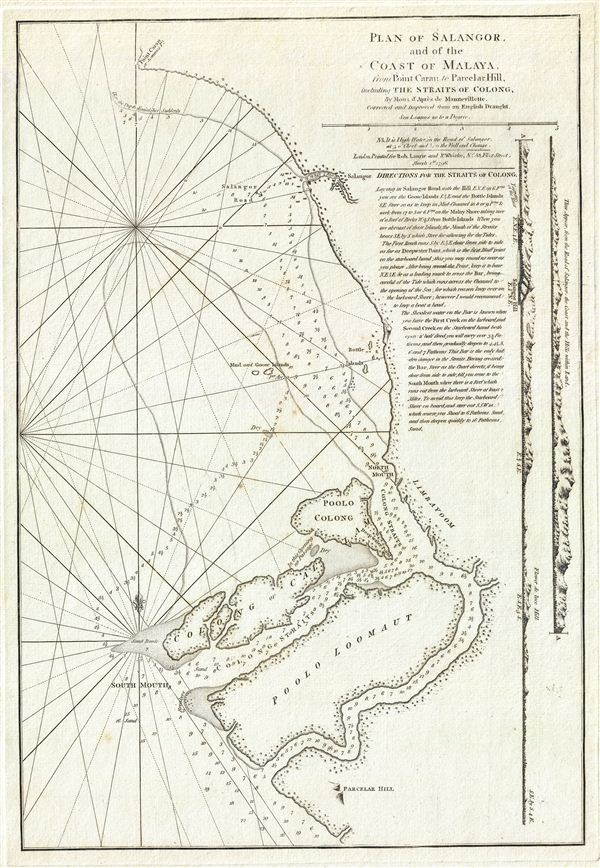 One of the earliest nautical charts to show the coasts near Kuala Lumpur, Malaysia.

A scarce 1796 map of the coasts of Malay (modern day Malaysia) in the vicinity of Kuala Lumpur, this is a fine example of Laurie and Whittle's 1796 nautical chart or maritime map of Selangor and the Strait of Malacca on the western coast of Malaysia. Laurie and Whittle's map covers from Point Caran (Peken Tanjong Karang) to Parcelar Hill (Banting), including the Islands of Poolo Colong, Colong or Cal, and Poola Loomaut (known by their modern day names of Pulau Ketam, Pulau Klang and Pulau Lumut). Along the right border, two coastal profile views details the Road of Selangor. An extensive annotation below the title offers detailed sailing instructions for the Strait of Colong (Sungai Tiga). Kuala Selangor, a town and the capital of modern day Selangor, was a Dutch trading center from about 1784 though the British East India Company would soon rise to dominate the Malay Peninsula. Though Kuala Lumpur, the modern capital of Malaysia, had not yet been founded, this is one of the few early maps to highlight this area, including the coastlands that would eventual be developed into Port Klang and Kelang.

The map offers rich detail including countless depth soundings, notes on the sea floor, commentary on reefs, rhumb lines, shoals, place names and a wealth of other practical information for the mariner. This chart was originally drawn by Jean-Baptiste d'Apres de Mannevillette and later corrected and improved from an English draught. This map was published by Laurie and Whittle from their offices at 53 Fleet Street, London, on March 1, 1796.