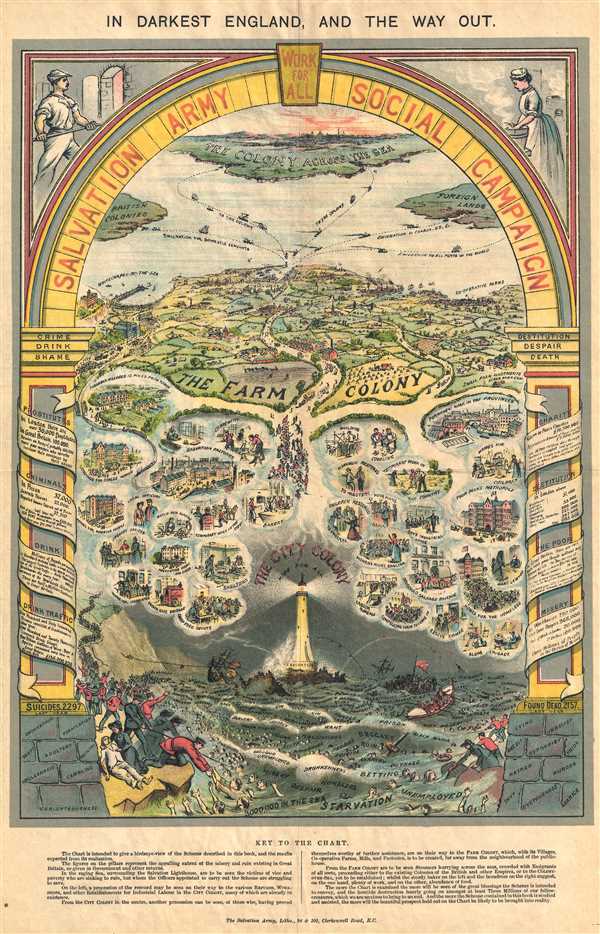 Details William Booth's 'Scheme of Social Selection and Salvation' - he was the founder of the Salvation Army!

This is a c.1890 William Booth chart of his 'Scheme of Social Selection and Salvation.' The chart depicts various aspects of the rather complex scheme. A 'Key to the Chart' is included at the bottom of the page states that the 'chart is intended to give a birdseye-view of the Scheme described in this book.' The key continues, 'the figures on the pillars represent the appalling extent of the misery and ruin existing in Great Britain, as given in Government and other returns.' The figures listed include the number of prostitutes in London and Great Britain, along with those Booth presumes 'who secretly increase their earnings by their shame,' the number of those prison, and facts and figures concerning alcohol use and abuse, destitution, poverty, and the number of suicides the previous year.

In the raging sea, surrounding the Salvation Lighthouse, are to be seen the victims of vice and poverty who are sinking to ruin, but whom the officers appointed to carry out the Scheme are struggling to save. On the left, a procession of the rescued may be seen on their way to the various REFUGES, WORKSHOPS, and other Establishments for Industrial Labor in the CITY COLONY, many of which are already in existence. From the CITY COLONY, in the centre, another procession can be seen, of those who, having proved themselves worthy of further assistance, are on their way to the FARM COLONY, which, with its Villages, Co-operative Farms, Mills, and Factories, is to be created, far away from the neighborhood of the publichouse. From the FARM COLONY are to be seen Steamers hurrying across the seas, crowded with Emigrants of all sorts, proceeding either to the existing Colonies of the British and other Empires, or to the COLONY-OVER-SEA, yet to be established ; whilst the sturdy baker on the left and the laundress on the right suggest, on the one hand, plenty of work, and on the other, abundance of food. The more the Chart is examined the more will be seen of the great blessings the Scheme is intended to convey, and the horrible destruction hourly going on amongst at least Three Millions of our fellow creatures, which we are anxious to bring to an end. And the more the Scheme contained in this book is studied an assisted, the more will the beautiful prospect held out on the Chart be likely to be brought into reality.

As stated above, the ocean at the bottom of the image is filled with the sins of humanity, while the Salvation Army is trying to rescue them, to help elevate them to the CITY COLONY where 'hope for all' exists. Through the various programs promoted in the CITY COLONY, those few that succeed are allowed to proceed to the FARM COLONY. If they again find success at the FARM COLONY they are allowed to go to THE COLONY ACROSS THE SEA. Through the narrative of redemption and salvation, the poor and wretched find success. In many ways this Scheme appears to parallel the Christian idea of salvation and everlasting life, just not in a supernatural sense. This Scheme wants to allow everyone to have a chance at achieving success in life, or at least at finding peace.

This chart was created by William Booth and published by The Salvation Army in William Booth's book In Darkest England and the Way Out. An antique copy of the book accompanies the chart.

William Booth (April 10, 1829 - August 20,1912), a British Methodist preacher, founded The Salvation Army in 1865. A Christian movement, the Salvation Army utilizes a quasi-military structure and Booth became its first General in 1878, a position he would hold until his death in 1912. Booth started as an evangelist, but felt compelled to preach, so he left the Methodist congregation with which he was affiliated and became an independent evangelist. Booth realized that it was his destiny to share the repentance that salvation can bring through accepting Jesus Christ as Lord and Savior to the poorest and most needy, such as alcoholics, criminals, and prostitutes. Booth was an avid writer, and regularly published a magazine. He also authored several books, including In Darkest England and the Way Out. This book became a bestseller and set the foundation for the Salvation Army’s modern social welfare approach. The work compared ‘civilized’ England and ‘Darkest Africa’ and suggested that, following the Industrial Revolution, quality of life in England was no higher than it was in the backwards, underdeveloped hinterlands of the world. Learn More...

Very good. Wear along original fold lines. Blank on verso. Accompanied by original copy of In Darkest England and the Way Out.