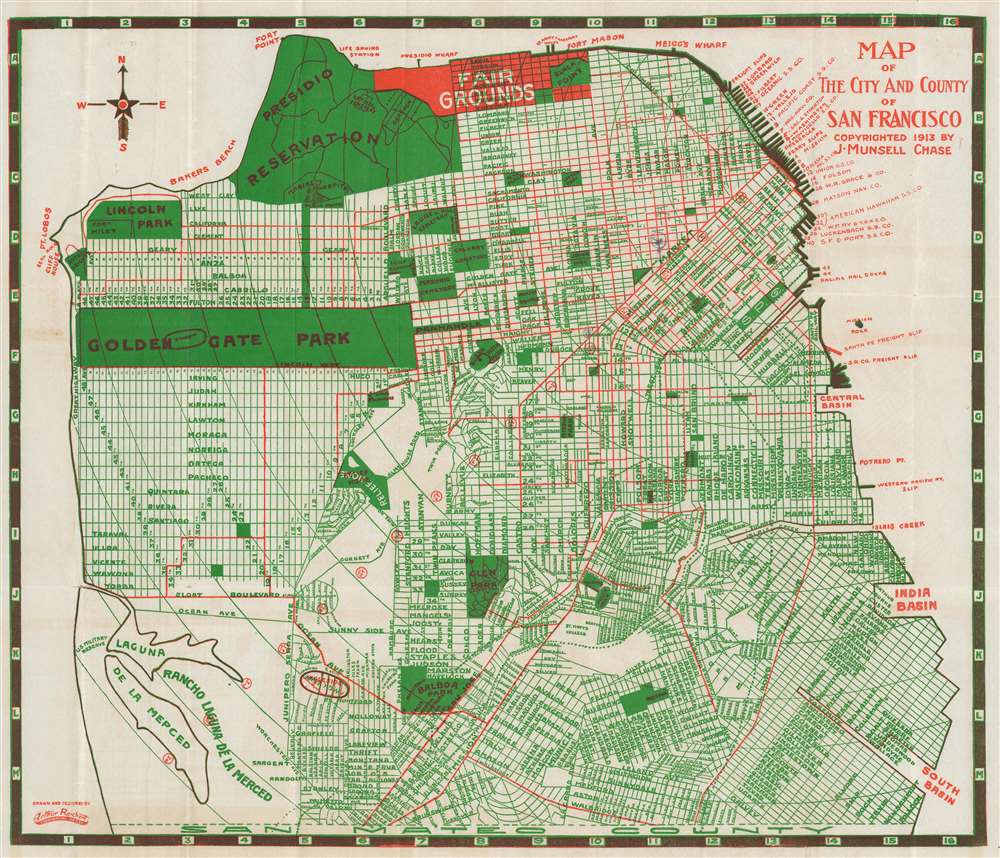 This is a 1915 J. Munsell Chase city plan or map of San Francisco, California, published as a guide during the Panama-Pacific International Exposition. The fairgrounds near the Presidio are highlighted in red, as are major streets. City parks (including Golden Gate Park), squares, and cemeteries are shaded green. San Francisco's many piers are identified as well.

The Panama-Pacific International Exposition (PPIE) was a world's fair held in San Francisco between February 20 and December 4, 1915. Ostensibly, the fair was intended to celebrate the completion of the Panama Canal, but it was also an opportunity for San Francisco to showcase its remarkable recovery from the 1906 earthquake and fire. The fair was constructed on a 635-acre site (shaded in red) along the northern shore now known as the Marina District. It showcased American industry, progress, and prosperity. The exhibition's pièce de resistance was the 'Tower of Jewels', a 435-foot tower covered in glass Novagems illuminated by powerful searchlights. Little remains of the original fair grounds, except for the Palace of Fine Arts - although the current iteration matches the original, it was completely rebuilt in the 1960s to be more permanent and seismic-resistant.

This map was drawn and designed by Arthur Reichert and published by J. Munsell Chase in 1915. Chase published at least three editions of the present map, the first appearing in 1913. The subsequent 1917 edition was 'revised' from the present 1915 edition.

Arthur Joseph Reichert (February 15, 1889 – August 19, 1963) was a California based illustrator and artist active in the first half of the 20th century. Reichert was born in Oakland, California. He studied painting at the San Francisco Art Institute from 1909 to 1912. He served in Europe during World War I, after which he returned to Oakland where he established himself as a commercial artist. Reichert died in Sacramento, California, on August 19, 1963. His work includes nudes, portraits, maps, and landscapes. Learn More...


John Munsell Chase (November 9, 1859 - January 1, 1941) was an American writer and publisher. Born near Hokab, Minnesota, Chase moved to Oakland, California in 1880. By 1894 he was living in San Francisco, where he was working as an editor. Chase wrote several books over the course of his career, including The Riddle of the Sphinx and was working on a history of San Francisco when he died. Earlier in his career, Chase had been active as a newspaper publisher. He published at least one guide to San Francisco, which appeared in 1913, 1915, and 1917. He died on January 1, 1941, after a tree fell on him and his dog during a storm causing a severe spinal injury. He married Catherine E. Maloney (1862 - 1924) in 1884, with whom he had nine children. Learn More...